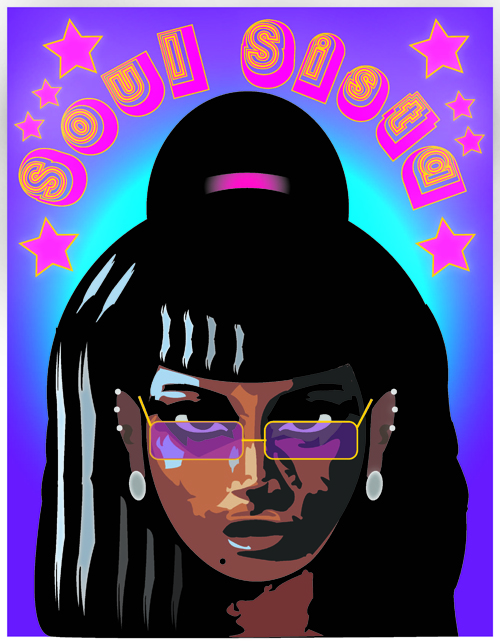 The Power of Aesthetic Voices: Celebrating African American History Month, a collection of artwork by eight African American students at Platt College, is on display through February at the Spring Valley Library. The graphic illustration, digital photography, and charcoal pieces highlight the struggles, sacrifices, and triumphs of African American people.

The show aims to “rouse conversations about diversity, elegance, strength, and the essence of African American culture,” says Platt College Librarian and Instructor, Nicole Lewis, who is curating the show.  “Art generates community awareness, advances civilization, and forms bonds between groups of people,” says Lewis.  The instructor recalls the Black Arts Movement of the 1960s and 70s, when various forms of art served as politically charged agents of social change. Lewis says that part of the purpose of creating this art show was to give today’s African American students an opportunity to experience the power of art, and how it can transform the hearts and minds of artists and audience alike.

Freddie Richardson, who created the graphic designs “Soul Sista” and “Egyptian Cinderella,” says it is important to him to defy stereotypes about African American men by pursing a career in art. “We have diverse interests other than the negative stigmas placed upon us by the masses,” he says. Kia Foster, whose featured pieces are of Nelson Mandela and Barack Obama, echoes this sentiment. “This exhibition is important to me because I have been given a chance to educate young blacks just as my ancestors did,” she says. “Our culture is not always portrayed as it should be.”

In addition to celebrating emerging African American artists, Lewis is commemorating Black History Month by sharing stories of artists who paved the way. “I asked my colleague, Richard Morris, a fellow African American teacher at Platt College, who inspired him to pursue art and he told me about his grandfather who was an illustrator in Texas while Jim Crow laws were in effect,” she says. “He had to attend class after 5 PM because classes were segregated. He was disheartened by the gross inequity, but never gave up because of his passion for art and the inner freedom it gave him.” Lewis says that Morris’ grandfather was a successful artist and was one of the first African Americans to have his work displayed in a building in downtown Houston. “Students need to understand African American history so we can build on our successes and continue the forward movement toward social justice through our artwork. If my students have been inspired – if viewers are moved by the artwork – the show will have been a success.”

The Power of Aesthetic Voices: Celebrating African American History Month will be on display through February at the Spring Valley branch of the San Diego County Library, located at 836 Kempton Street. There is no charge for the show.

Emmett Till images have multigenerational impact on artists

The Bedouin Artist Embroidering Her Heritage Onto Plates