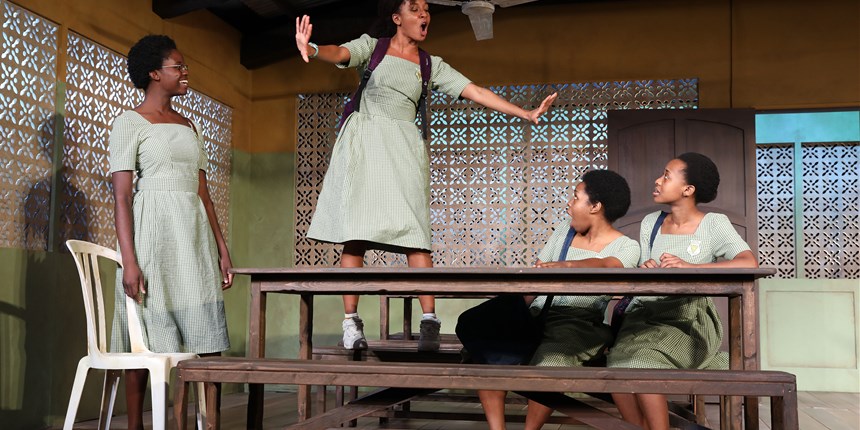 While the Broadway community is all-abuzz about Tina Fey’s theatrical adaptation of the cult movie “Mean Girls,” currently playing at Washington, D.C.’s National Theater, another production shedding light on the dubious deeds of haughty high schoolers is well underway in The Big Apple.

This one, however, marks different territory: “School Girls; or, the African Mean Girls Play” centers on the elite antics of black adolescents at an exclusive boarding school in Ghana who are competing for a beauty pageant.

With an all-black female cast, the irreverent comedy is directed by Tony Award-winner Rebecca Taichman and written by acclaimed theater actress Jocelyn Bioh, who was most recently seen in the revival of Suzan-Lori Parks’ “In The Blood.”

“School Girls” — premiering at New York City’s Lucille Lortel Theater on Thursday — drew its inspiration from the personal experiences of Bioh. She attended a boarding school in Hershey, Pennsylvania and her mom is a graduate of Ghana’s prestigious Aburi Girls’ School.

“We have this strange, shared experience of understanding what it’s like to be in boarding school and having to defend yourself against a group of girls,” Bioh shared. “It’s a very interesting and precarious and unique time in your life, being in middle school and high school. I just feel like that gets intensified when you’re away from home and left to your own devices.”

Bioh, who was raised in the Washington Heights section of New York City, continued: “The way you have to assert yourself in that world is just a really interesting thing, and it’s a really fascinating time being a teenager. She used to tell me little stories of the way she had to defend herself against girls that who were mean to her and how she kind of became a little meaner. It’s more comical than anything. I just let my imagination run wild when I decided to write this play.”

Another inspiration for “School Girls” was thereal life drama surrounding the 2011 Miss Universe Ghana pageant — where Yayra Erica Nego, a fair-skinned, bi-racial American native (with questionable “ancestral” Ghanaian roots) went on to win the title and compete in the Miss Universe pageant representing the African country.

Noting that “one thing that every woman kind of identifies with African people is their beautiful, dark skin,” the former Cover Girl spokeswoman, further reflected about the controversial event: “It was just interesting that what many think of as terrible standards in another country, in another culture, had somehow infiltrated into African society.”

“We wanted to talk about colorism,” she continued. “And I just thought that this was a perfect opportunity to be able to conflate both my boarding school experience with this very strange, and sadly true, story of the Miss Ghana Pageant.”

As an actress, the Columbia University alumna has performed on The Great White Way as part of the ensemble of the much-lauded 2014 musical “The Curious Incident of the Dog in the Nighttime.” She also starred in Off-Broadway productions of Branden Jacobs-Jenkins’ “An Octoroon” and “Everybody” — for which she was nominated for a Lucille Lortel Award in the Best Featured Actress In A Play earlier this year.

“I’m disciplined,” Bioh told NBC News about her mastery of moonlighting and multitasking. “This year’s been really interesting because … I had like a one-and-a-half week overlap where I was working on my play that I wrote during the day, and then going and doing the show that I was working in at night.”

“There’s literally a picture of me backstage in my costume writing my other play,” she chuckled.

Playwriting became a craft she started to take on due to the scarcity in diverse acting roles during her undergraduate studies at Ohio State University, where she studied theater.

“I came into playwriting in a really funny way… I really wanted, obviously, first do the craft and work on things, but they cast a type there, which means that they only cast roles that racially fit or what the professors at the time felt like racially fit. It really limited a lot of the roles that I could play,” she explained. “To make up for the credits that I wasn’t getting, I decided to take a playwriting class and I kind of fell in love with it.”

With “School Girls” marketable subtitle, one can assume comparisons to the popular movie and Broadway bound “Mean Girls.” But Bioh noted that the “Or, The African Mean Girls Play” reference was only to be used as an explanation to potential theater producers.

“The subtitle somehow just stuck and I was like I’ll just keep it. It’s totally fine,” she revealed. “It’s fate, because it has put people in the mind frame of what they’re about to see even though my play is nothing like “Mean Girls.” There’s not correlation in any way with the exception of teenage girls in high school. Oh, and our cast looks a lot different than theirs.”