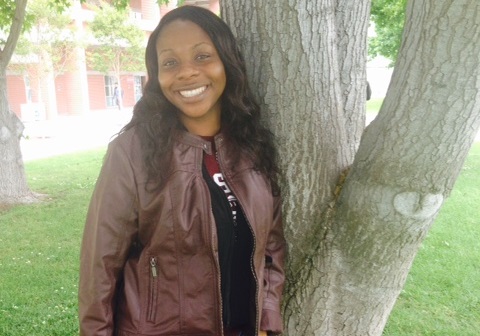 It starts when we’re young. Constant questions from family members and strangers asking ‘what do you want to be when you grow up?’ At first the thoughts are innocent and fun. Then begins the tedious process of making plans, building up hopes and tying our happiness to the timelines we create for ourselves to achieve our goals. When life inevitably shows up with a red ink pen and eraser to edit our timelines, our entire worlds can fall apart.

San Diego native Ayesha Gipson always knew she wanted to be a teacher since she was eight years old. In August, she’s about to transfer from City College to attend Grambling State University, pursing a degree in Secondary Education with an emphasis in History and Social Studies. However, Gipson will tell you the events leading up to her current success were light-years from any plan she could have drawn up as a wide eyed and hopeful eight year old girl.

The beginning of Gipson’s journey went according to plan. She graduated from Lincoln High School and enrolled in City College in August of 2009. Admittedly, her motivation for attending wasn’t to end up in front of a classroom of young minds waiting to be molded.

“I went just to be there,” said Gipson. “I wasn’t taking my education seriously. I was distracted because I wanted to find a military man to take care of me. That was my mindset back then.”

She got her wish, eventually leaving school to enter into a relationship and relocate to Hawaii with her new boyfriend. After a short honeymoon stage, however, the relationship became abusive mentally and physically. Gipson turned to friends and clients of her hairdressing side hustle to build the strength to leave the toxic situation with her boyfriend.

“I always talked about education and social issues with my clients while doing their hair. They would always tell me to leave here, go get my degree and become a teacher. I finally decided I had to get out of there before he killed me. I left and never turned back.”

Gipson returned to San Diego in August of 2015 to live with her mother. She spent every dime she had to her name making it home, but the mental stress from years of abuse paid the biggest toll on her.

“I suffered from anxiety. I was afraid to take out the trash, interact with people and even write my own name on checks. I forgot how to read or do anything on my own because I depended on him so much.”

Things slowly started to take shape when Gipson began to trust her intuition. She’d heard about the work the Urban League of San Diego did with young adults looking to start over. Something inside of her said to pay them a visit. Kea Hagan was the first to greet her at the Urban League, and after listening to her dream of getting involved with education, Hagan pointed her in a productive direction.

Gipson began volunteering with the Urban League, getting involved with their College Readiness Program, Golden Pyramid, and Scholars Program that are all dedicated to youth development. Her involvement introduced her to many influential individuals who could help Gipson get back on track. These connections helped her return to City College in 2016.

“The people there didn’t know what I’d been through, but they helped me and nurtured me. It was a big influence. I’ve always loved education. Of course things happened that distracted me for that, but getting back to that right path again gave me a greater passion for the whole process of achieving a degree.”

Gipson’s second stint at City College was completely different than her first. Fueled by her past experiences and new found drive to complete her childhood goal, she jumped at any opportunity to get involved and move forward. One resource Gipson utilized was the Transfer Agreement Program at City College. 21 Historically Black Colleges and Universities associated with the program provide automatic admission, priority housing, and available transfer scholarships for participants. Gipson applied to all 21 and heard back from Grambling first, solidifying her decision to transfer there and complete her degree.

It’s often said that God laughs at our plans. While it may seem crewel to think that a being who contains unconditional love would laugh at the trauma that comes with our journeys, I believe the true humor resides in the thought that we wouldn’t reach our destinies and thrive despite whatever happened along the way. Gipson left me with these words for anyone struggling getting back on track after a traumatic experience or failure in life.

“It’s not too late. Don’t think that you’re the only one out there. People are out here in the city of San Diego willing to help. But they won’t fall from the sky, you have to seek it yourself. Whatever happened to you is not the end. The beginning is when you decide to turn it around. You have to change your mindset and your surroundings. It broke my heart that I had to disassociate with some people, but I had a new direction I was going towards. I didn’t need people holding me back or bring me back to old mindsets.”