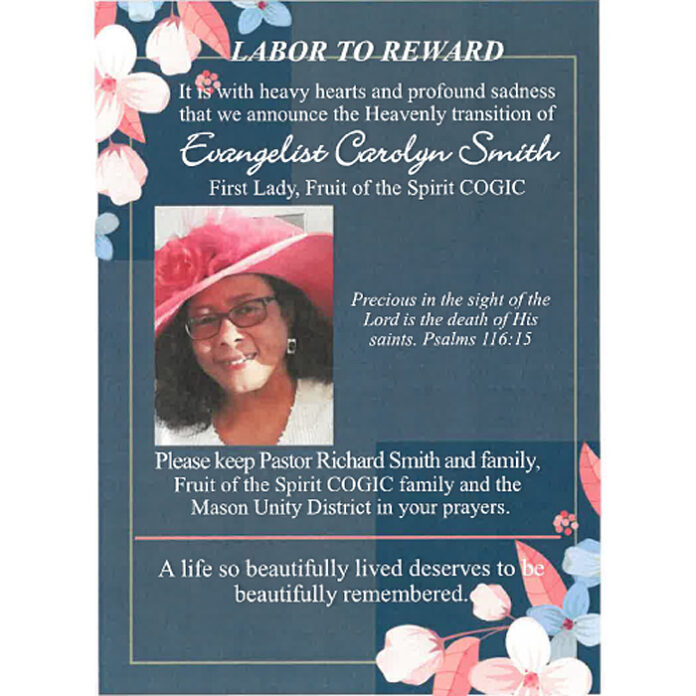 Carolyn Corinne Coleman-Smith, was born in Detroit, Michigan on December 22, 1945, and crossed the bar into the heavenly kingdom on May 27, 2021.

Mother Carolyn or Grandma as she was known was one of two children (brother John Danforth Coleman) born to the late Jesse John Coleman and his wife Thelma (Doby) Davis. At about the age of thirteen, Carolyn moved to the city of San Diego where she attended Lincoln High School and San Diego Community College.

Carolyn was a Navy wife for eighteen years as the spouse of the late Jack Smith. Her “first set” of offspring, Renee Bianca, Dana, Danny and Creta were children of this first marriage. On Thanksgiving Day, 1985, Carolyn married the love of her life, Richard F. Smith Jr., who brought five additional offspring as her “second set” into her role as mother. These were Robert, Richard III, Russell, Renee Francine and Yralinoska. On marrying, the couple agreed that there were to be no “your children”, “my children”, only “our children.

Carolyn had several employment opportunities prior to marrying Richard including working as a veterinary assistant, a full charge bookkeeper for a bread company and the office manager for Dr. Saul Goldston at the Euclid Medical Center. It was he who actually introduced her to Richard.

Once married Carolyn became an integral part of the family business, Quality Tax & Financial Services Inc. as  a California Certified Tax Practitioner and handler of all administrative and personnel tasks of the corporation. She performed those tasks for 35 years while simultaneously serving as a founding member of the Southeast Alano Club and a Board Member and Treasurer of the Lemon Grove Alano Club. Carolyn sponsored over 200 women in the Alcoholics Anonymous program during her 38 years of sobriety. In addition to advice and council she and her husband often provided a sober living environment in their home for those battling the disease. She was a well known speaker for AA, known up and down the West Coast.

Carolyn was a member of Bethel AME Church here in San Diego when she met her husband Richard. However, on the advice of her then Pastor Ellis Casson, she moved her membership to join her husband at St. Stephen’s COGIC where she not only sang in the Sanctuary Choir but served as Treasurer and as President of that group. She later teamed with her husband, by then Elder Smith, in planting the Fruit of the Spirit COGIC, continuing the work of guiding and counseling persons in the way of life Holiness and the Joys of walking in the footsteps of Jesus Christ. She was designated a Mother in the church by Superintendent Sidney Buggs III and was dedicated as a Missionary/ Evangelist by the Jurisdiction’s Supervisor of Women, Gloria Lynch.

In addition to her husband of 35 years, Mother Carolyn leaves behind her mother, her brother seven living children, twenty two grandchildren and twelve greatgrandchildren to celebrate and emulate a life well lived.

The family extends its thanks to all of those who have reached out to comfort us in this time of grief and sorrow. Your gifts, your tributes, your prayers and your kind words are truly appreciated.

“ Now I saw a new heaven and a new earth, for the first heaven and the first earth had passed away. Also there was no more sea.  Then I, John, saw the holy city, New Jerusalem, coming down out of heaven from God, prepared as a bride adorned for her husband.  And I heard a loud voice from heaven saying, “Behold, the tabernacle of God is with men, and He will dwell with them, and they shall be His people. God Himself will be with them and be their God.  And God will wipe away every tear from their eyes; there shall be no more death, nor sorrow, nor crying. There shall be no more pain, for the former things have passed away.”