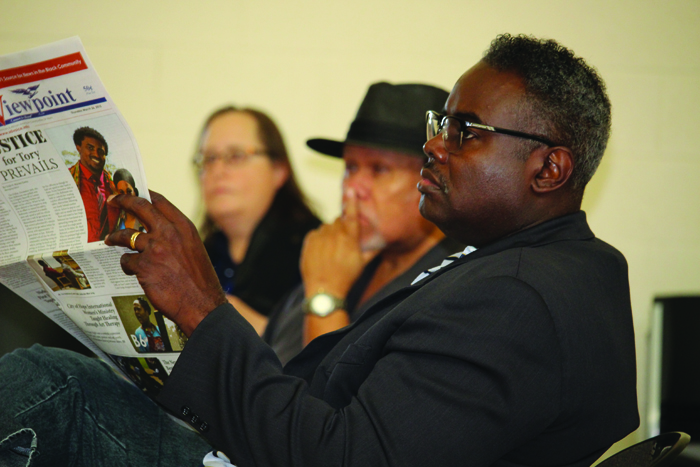 On Saturday March 28th, the San Diego Voice & Viewpoint, the NAACP and Black Men United held a combined Town Hall Meeting at the George Steven’s Senior Resource Center. About 80 members of the community were on hand to express their concerns over the use of Penal Code sec 182.5 and 186.22 as a means of incarceration our young black males who have no crimes  or charges against them. But the meeting was also a time of sharing other horror stories associated with law enforcement in San Diego County. Moderated by the Voice & Viewpoint Publisher, Dr. John Warren, the meeting opened up with a recap of courtroom events and discussions had, centered on Penal Code 182.5 and those affected. With an open microphone placed in the center of the room, Warren invited attendees to come to the mic to share their thoughts and feelings regarding the aftermath of this penal code.

Duane Harvey, father of Aaron Harvey, was the first to approach the microphone, offering words of thanks to the many individuals that have stood with he and his family over the last few months, rallying around his son’s innocence. “First I’d like to thank everyone that’s here and everyone that participated in the efforts of [spreading] awareness of 182.5. It took a lot of courage for a lot of people, especially for the young men that are being locked up.” Harvey shared that yes there was a victory with his son, and Brandon Duncan, but there is a lot to be done. “I looked at the 5-9 cases and there are more young men in [those cases] that have been charge with the 182.5 than that of the Lincoln Park case,” he said. “I stand here saying for myself, I know I was sleep on this thing, as well as many issues. I’m 53 years old, and I used to tend to work in just an area of my community – on just my street. I really didn’t do a lot outside, I just saw what was going on in my little area,” but this case has definitely made him more aware. “On this thing I was asleep, and I repent of that, “he said. “Now I am completely active in all the things going on that affect our community.  Don’t be ashamed that you don’t know. You know now, so you do now.” he encouraged. “When you wake up, then you do something.”

Next, Harvey’s son Aaron approached the microphone with the same words of thanks, but hastily reminded the audience that it wasn’t over. “We’ve still got a whole lot of things to do.” In a sense, Aaron said he thanked God for 182.5, because he believes that it woke a lot of people up. “It brought the community closer together,” he said.

Ms. Kathleen Harmon, a senior member of the NAACP was present to speak on behalf of the organization and expressed her gratitude for the gathering.  Harmon spoke against organizations with the same goal having numerous meetings, but was glad that instead, the various organizations in the community gathered together to stand as a fist instead of an open hand.  “Legislation is the answer,” she said. “That’s what will change things.”  Throughout the morning, different members of the community stood to talk about what they felt the next steps should be in freeing the remaining innocent young men incarcerated, and some even asked for clarity on what made someone a documented gang member.  Rev. Rickey Laster, who has recently been appointed as the Executive Director of the Commission on Gang Prevention and Intervention shared insight on his role and his focus. “I’ve been down there for about a month officially, but I have been working on the documentation for the past 10 years.”  As a past Black Men United President, Laster was key in bringing this documentation issue to the forefront. “I’m not happy about it and the Commissioner isn’t either,” he said. Other concerned members in the community that spoke expressed a concern in getting mental health issues of victims addressed, and rallying the community together to press towards a solution.

One of the untold stories is the pain of both the families of those taken into custody under questionable circumstances and the families of the victims of the violence crimes that are at the heart of the arrest and charges. Tahsa Williamson, Co-founder of the San Diego Compassion Project, shared her insight into the mental health issues that she has encountered while aiding families through this tragedy.  Her comments and the discussion surrounding it revealed a lack of support services for both groups of families with an emphasis on the children who are often traumatized the most. “If we’re not providing services for people like Aaron… he can go to jail tomorrow if he reacts to something because it would be considered an assault. We have to know how to identify that he is not okay, and that his family is not okay,” she said.  While the Compassion Project and those who work with them are doing an outstanding job of attempting to help these families, it became clear during the discussion that there is still a great need for support services such as counseling and financial support by the hardships created by events that cost individuals their jobs, without an apology.

Overall, the meeting not only provided an opportunity to hear from families and victims of 182.5, but also an opportunity for the community to weigh in with its concerns about what appears to be an effort to replace individuals released under Proposition 47 with a new host of jail occupants under 182.5.  For any questions about future meetings as well as concerns, please email news@sdvoice.info.