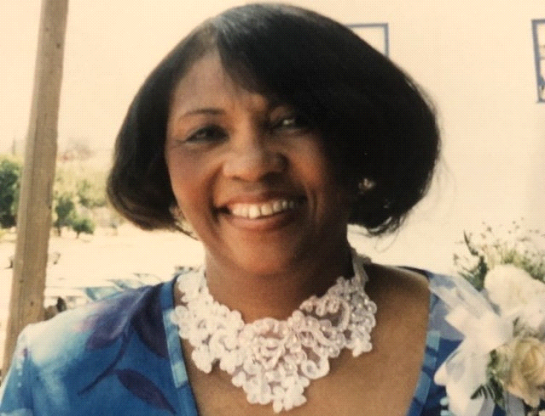 Funeral services were held on January 5, 2022 at Bethel Baptist Church, with the burial following at Mt. Hope Cemetery. Final arrangements were entrusted to Anderson Ragsdale Mortuary.

Gladys Virginia Calvin was born on February 28, 1940 in Bunkie, Louisiana. At a young age, she and her family moved to San Diego, California.

There she met and married Richard Calvin Jr. and to this union, three sons were born; Reggie, Rex, and Russ.

She later acquired her Bachelor’s Degree in Business Administration at National University in San Diego. Through her hard work and dedication, she became the first Black female bank branch manager in San Diego. Her position helped Southeast San Diego by providing financial opportunities and inspiring other young Black women and men to join the banking profession.

Gladys was active in the community in other ways through several different social organizations. She was a member of Women Incorporated, The Carrousels, Jack and Jill of America, and the Delta Sigma Theta Sorority.

She was a member of St. Paul’s Methodist Church of San Diego and later joined the Bethel Baptist Church, where she attended until her health prevented her from attending in person. Even though she was unable to attend in person, she served as an example of strength and love to all those who knew and visited her.

On December 11, 2021, God called Gladys home to find peace and rest. She leaves to cherish her memory, her sister, Winnie Faye Franklin of San Diego, CA. Her three sons: Reggie Calvin, Rex Calvin (Cheron) of San Diego, CA, and Russ Calvin (Clarice) of St. Paul, MN. Five grandchildren: Reiss, Richard, Clarke, CeeJay and Charley Calvin and a host of extended family and friends who are left to cherish her memory.