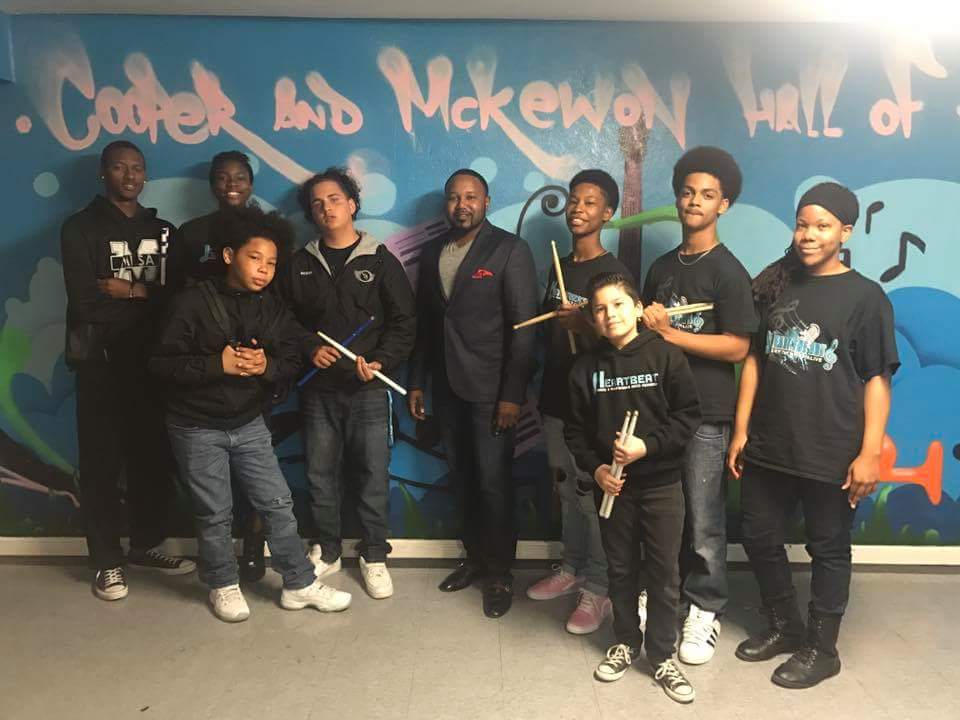 Director of Bands, Nathan Haymer came to San Diego Thursday, March 1st, to explore the city. He had always heard of and seen pictures of San Diego, however when visiting California, the furthest south he had come was Los Angeles. Little did he know, what was supposed to be a couple hour trip, turned into on site auditions for The Human Jukebox, the 240 member band (192 that march), at one of Louisiana’s premier Historically Black Colleges and Universities, Southern University and A&M College of Baton Rouge. For local students at Heartbeat Music and Performing Arts Academy, their love and dedication to music was about to turn into a lifetime opportunity.

Students and parents eagerly gathered at Heartbeat founded in 2014 by Tyra Hawthorne, an alumna and scholarship band member at Grambling State University, also an HBCU in Louisiana, for Haymer’s arrival. Students practiced, while curiously looking at the door every time it opened. When Haymer arrived, each was beaming from ear to ear. He first gave the history of The Human Jukebox, a band he had performed with and was Trombones’ Section Leader, when he matriculated at SU. The band’s name comes from its ability to play any and everything, bringing the music to life, oftentimes giving a sound better than the recorded version.  Four Super Bowls, five Presidential Inaugurations, Mardi Gras, the Annual Bayou Classic and the drum section has traveled to North Africa to perform and this is just a few of their notable appearances.

When asked, students within the Thunder Squad Drumline, stated sticks were the tool they used to drum with. Haymer explained, “No, that’s your key to get out of here, because I came here ready to give scholarships! I want to write a scholarship for you to come and pursue an education, by way of band.” That said, they were off. Students played scales, rudiments, a prepared piece and sight-reading. In between auditions, students heard some of the same words Hawthorne had previously lectured, perfecting sound and staying atop of their grades. After an hour and a half, Haymer grinningly stated he was excited he made the day trip to San Diego. “I’m getting somebody in here or somebodies, more than one person, whoever wants to come!” and he meant exactly that. The following morning 3 students woke up to emails from Haymer. Freshman and percussionist, Mekai Cross and Kylen Dent, a sophomore percussionist, were offered a scholarship to the band upon graduation granted they meet the University’s requirements in GPA and test scores and also improve their percussion skills. Alexandria Payton, an Olympian High School junior, was offered a full band scholarship to play the trumpet, when she graduates in 2018.

Southern University and A&M College, hosts an annual high school band camp during the summer that attracts over 500 students from various states throughout the country. Haymer advised that there were currently no students from SoCal in his band and that he is looking to change that. Thunder Squad Drumline was offered a band camp scholarship and will be reunited with Haymer and his staff this June.

“When taking on the responsibility of the youth, be prepared to be everything to them. Their mother, sister, teacher, mentor and counselor. You will fill voids for them where they need it most. They will trust and depend on you. Either you prepare to go all in or don’t do it at all,” passionately expressed by Hawthorne. Words that she humbly and without a doubt meant as since the visit, she has already scheduled for Director of Bands, Sanford O’Neil and Associate Director of Bands, Roderick Little of Jackson State University (Jackson, Mississippi), to come to San Diego on Saturday, May 6, 2017 at her academy. Hawthorne, can meet one on one with students and parents to explain the audition process and how to prepare. “My title is Founder and Executive Director of Heartbeat Music and Performing Arts Academy, but my job is to make sure that every child that walks through that door succeeds.”