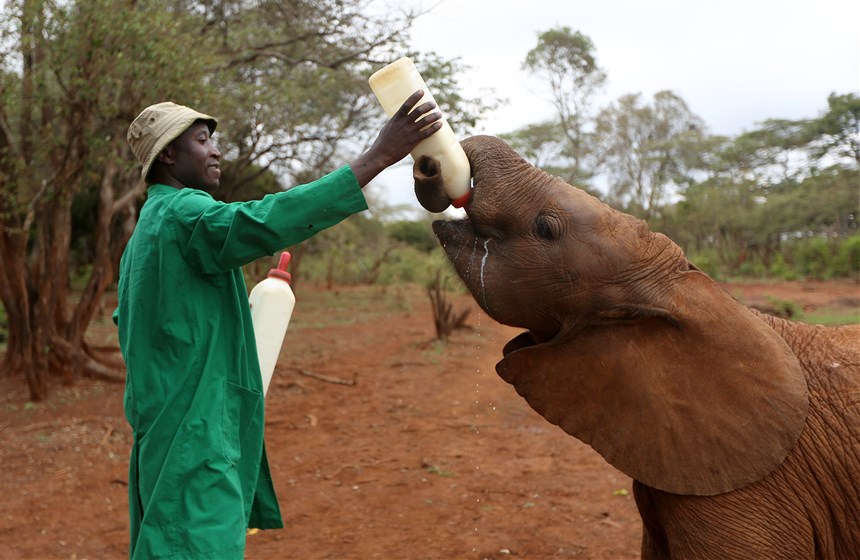 NAIROBI, Kenya — As the Trump administration announced a lift on a ban put in place by the Obama administration to stop hunters from importing elephant trophies into the United States from Zimbabwe and Zambia, African conservation groups continue to work to protect one of the continent’s most precious animals.

According to the African Wildlife Foundation, 100,000 elephants were slaughtered between 2010 and 2012 by poachers for ivory. At current poaching rates, elephants may be extinct in certain parts of the wild in as little as 10 years.

In Nairobi, Kenya, the David Sheldrick Wildlife Trust is committed to stabilizing and growing the elephant and rhino population. Founded in 1977, the group works to combat removal of the animal’s tusks for use as trophies and slaughter of the animals to be consumed as bush meat.

At 6 a.m., Peter Mbulu, 38, is following behind a group of baby elephants as he leads them into the forest at Nairobi’s National Park. A humid and a sunny morning, the elephants begin grabbing the tree branches and playfully pushing their keeper Mbulu along. Mbulu has worked for the David Sheldrick Wildlife Trust for 18 years and knows the elephant’s daily routine.

The trust has saved over 200 infant elephants and has rehabilitated the orphans back into Kenya’s Tsavo East National Park. Rehabilitation back into the wild typically takes between five and 10 years. The trust was created in 1977 by Dr. Daphne Sheldrick, who spent more than 60 years working with wildlife.

A dark time in the creatures’ history, there is a glimmer of hope. The keepers at the elephant nursery become a temporary family for the babies and many of them have been with the trust for more than 10 years, committing to the elephants well-being.

“The special relationship between the keepers and the baby elephants is very, very nice,” said Mbulu. “Because, we normally stay with them as our own children. We have to take care of them, protect them, walk them, play with them as sometimes we do with our babies.”

The nursery currently has 32 elephants as well as other animals, including one two-year old giraffe named Kiko and a blind rhino named Maxwell. There are 24 keepers total that feed the elephants, bathe them,and sometimes sleep with them in a process that lasts three years.

Elephants are not the only animals in danger of extinction. The black rhino population on the continent is down nearly 98 percent since 1960. The Sheldrick Trust has saved over 16 black rhinos from poaching in Kenya.

The David Sheldrick Wildlife Trust also operates nine anti-poaching units and five mobile veterinary units in conjunction with the Kenya Wildlife Service. Every month, these units on the ground and in the air work to rescue and keep wildlife safe.

As 10 a.m. nears, the keepers get milk ready for feeding. The elephants bound towards them in small groups, waiting for their turn to drink three liters or more of milk. Fed every three hours, the keepers stick to their routine. A dedicated group of caretakers that ultimately give elephants in Kenya a chance to survive in the wild.