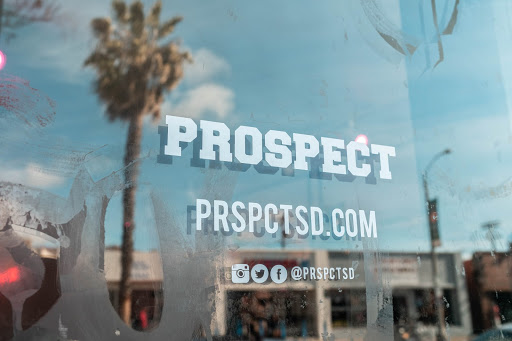 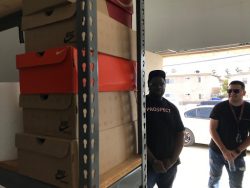 Garnet Avenue’s newest tenant doesn’t announce itself the way its neighbors do.

Tucked discreetly between into a mass of Pacific Beach eateries, bars and yoga studios, Prospect clothing boasts no signage or lighting.

Its entryway plays more like a dark urban alley than a beach town storefront.

“We opened our doors just to feel out the environment and some people came through and bought stuff. Repeat customers already come back organically.”

Valley – a native of Trinidad and Tobago – got his start in streetwear after landing in San Diego as a US Marine.

Five years and two locations later, Valley and his business expanded their products and services ahead of a relocation to Pacific Beach, seeking increased foot traffic and more central locale.

In addition to its own clothing and an array of footwear, Prospect’s new location carries products from local brands such as MondaySuck and Rottweiler.

Boutiques and shops like Prospect have become staples in the world of streetwear and lifestyle fashion in recent years, but have thrived primarily in larger cities.

“We’re one of the only boutiques in this area that carries the brands we carry,” said Prospect manager Jay Shells, a longtime friend and business partner of Valley. “A lot of people come in here and they’re like ‘Oh, this looks like a store out of L.A. or New York,’ we bring that culture to PB, which is predominately known as a beach town, a surf town (and) tattoos town.”

Despite its healthy retail climate, with sales tax accounting for more than 20 percent of the city’s annual budget in fiscal year 2017 ($272.8 million), Shells noticed a dearth of premium streetwear and high-end sneaker retailers in San Diego area.

“I’m from New York. I was stationed here,” he explained.

“I had nowhere to shop, but to take that three-hour drive to LA. So now we get a lot of guys that come in here like ’Finally I don’t gotta’ drive to L.A.’… It gives people who are into that culture options (and) those who don’t know an introduction to it.”

Like its products, the store takes cues from the lifestyles of its target demographics.

In the first weeks of business, the environment seems to be as big a draw as the products.

Customers have made a habit of hanging around to enjoy the music, in house sneaker-cleaning service and company of the staff.

“We have employees clock out and 5 o’clock sometimes and don’t leave until 11,” said Shells. “We close at eight, but we make some sales at 9:30, 10:30 sometimes at night cause guys pop their head in and ask ‘hey, can we come in?’”

Alex Le – a recent graduate of California State University San Marcos – began interning for Prospect after shopping in the store a week ahead of its grand opening.

“Me and my girlfriend were just walking down the street,” Le recalls. “I started talking to (Shells) and (Valley)…We talked for a long time and I asked if they needed interns and they told me to come back.”

Le is pursuing a career in product management and has aspirations of developing his own clothing line. Both he and lead associate Sarah Holovina take pride in the communal environment Prospect breeds.

“It’s not about clocking in, selling and clocking out,” Holovina said. “It’s (expletive) fun… I really like the brand, I like the guys and I think it’s gonna’ go far.”

“We definitely educate,” Valley said. “If someone comes in to drop off a pair of shoes for cleaning, we tell them what we’re doing, about each new brand and let them make their own decision on what they want.”

Valley noted as Prospect continues to develop its community of shoppers and followers, it plans to continue expanding its products, hinting at the possibility of a collaboration with a major sneaker or apparel company.

Such is an increasingly popular trend, with streetwear brands and boutiques including Undefeated Inc., Union Los Angeles and KITH releasing products in partnership with Nike.

“There’s some plans in the works,” he said. “We can’t talk about stuff too much yet, but there’s definitely gonna’ be some stuff coming out.”

“We were just talking to the (New Balance) reps to see if we could do something with him,” Valley said. “San Diego is a big supporter of him, ‘cause he’s a big state player. Kawai is San Diego when it comes down to it.”

Prospect is located at 1041 Garnet Avenue between Cass and Dawes streets. It is open from 11 a.m. to 8 p.m six days a week.