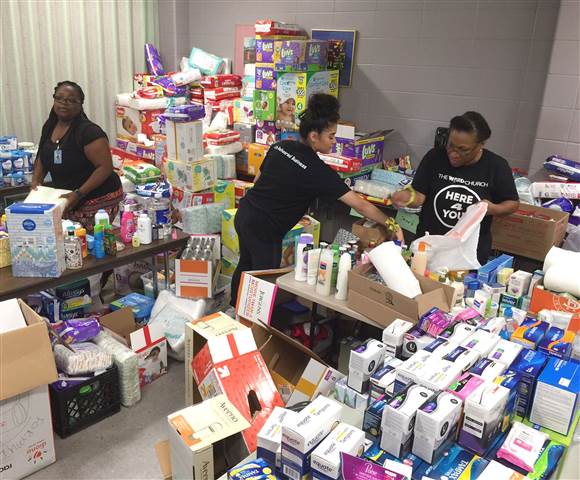 As Hurricane Harvey relief donations pour in from around the world and celebrities from Kevin Hart to Tyler Perry urge contributions, many are looking to Houston area mega-churches and asking whether the role of the church during times of disaster should extend beyond spiritual sanctuary.

Despite some pointing fingers — who should do what and how far should that spiritual assistance should go — leaders in the faith community say they’ve spent this week assessing the needs of their flock and are mobilizing to provide aid.

Gospel singer and YouTuber Joseph Solomon has teamed up with members of the Poets In Autumn Tour, a group of poets spreading the gospel through spoken word, to gather donations that will go directly to 8-10 families in need. Singers David and Tamela Mann, known for their roles in Tyler Perry shows like “Meet The Browns” are asking people to make donations to The Mint Foundation.

“In the midst of this catastrophe, our city needs a lot of helping hands,” James Edwards, pastor of Transforming Faith Christian Center said in an Instagram post. His church in southwest Houston will open Saturday as a distribution center to help communities such as Meyerland, Sharpstown, and Braeswood. He compiled a “wish list” of items people in the communities need and is accepting online donations.

Jamail Johnson, pastor of The Word Church in north Houston and a native Houstonian, called the flood “one of the most disheartening things I’ve ever seen in my life” but he said he was blessed. Parts of his neighborhood had severe flooding but his home was spared.

Although his church was flooded with nearly 2-feet of water, his team has been been distributing items and resources from the M.O. Campbell Center, a multi-purpose facility in north Houston that has been designated as a shelter.

People have not only been able to get necessities such as food and clothing, but also grooming care such as hair cuts. They have also been receiving items and donations through their outreach initiative “The Fulfillment Project.”

“If we are in the community, that community has to know that we’re there,” Johnson said. “We shouldn’t just use the community for the street address if we’re not addressing the issues on the street.”

A Black Beekeeper in Phoenix and her Baehive Sisterhood