Since 2008 Tamera Hill’s plays have been setting San Diego on fire. One of the few African American women in the game, Hill is a playwright that has been wowing audiences nationwide with her thought provoking, seat stirring productions. This Saturday, Hill will be debuting her long awaited Workplace Drama at the Lincoln High School Performing Arts Center in San Diego. Recently getting a nod from one the industry’s most prominent playwrights, David E. Talbert, Hill opened up Workplace Drama in the Los Angeles/Inland Empire area, with a mostly L.A. cast.  When asked why she started up north she explained “At some point you have to branch out, especially when people are requesting that you do. I’m getting a lot of requests! People are ordering my DVDs and I send them out.  People are requesting me to bring my shows to their different cities.”    Still currently employed part-time with the City of San Diego, she is an advocate of following your dreams. “The transition to part-time [is something] I just had to, it was too much, and I needed more time to write,“ she explains. “Sometimes your dreams will push you into where you need to go.” By next year, Hill plans to be writing and producing full time. 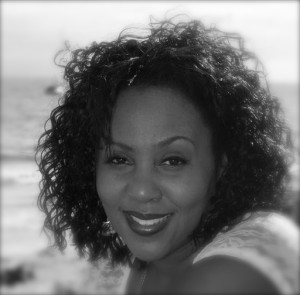 A go-getter, Hill wasn’t formerly trained to write and produce plays. She just had a passion to do it, did her research and pursued her passion. As she’s made steps towards what God has placed in her to do, He’s made the provision for her to accomplish the goals …even meeting Talbert. “He literally gave me a shout out on Twitter one day,” she recalls. “I gave my pleasantries and thank yous back, and then he asked me to Direct Message him. I thought it was a joke,” she chuckled, “but it wasn’t.”   Talbert asked for her contact information, and she waited to see what would come next.  Soon after, he adopted her as his mentee.  “We talk almost every day.  He literally calls me, doesn’t say hi, just starts talking,” she laughs. “I just pick up a pencil and paper and start writing,” almost as if Talbert was placed in her life for the specific purpose of passing on his nuggets of wisdom. When speaking of her plays, Hill believes that what she does is a ministry to heal and deliver. “God has simply called me to minister on a different platform. I don’t cram Jesus down their throats but when they see a show, they can tell that something is different.”  Not only has Hill been able to touch audiences with her messages, but those that are right under her, such as members of her cast. “One young lady said that she had let God back into her life because she had totally pushed Him out. She had even started her personal bible studies back up again. Sometimes it’s right in your camp where you are able to minister to people.”

Now when asked what people can look forward to regarding Saturday’s show, Hill giggled, while she took time to think about what was brewing in her Workplace Drama pot. “You will laugh a lot! You will see stereotypes in people from what you see at your job – from the office playboy, to the person that gossips, to the boss that is extremely sneaky and cunning,” and much more. “I always want to put what’s real in front of people. It’s real life! Not just what we see on stage,” she said.

Workplace Drama is an urban comedy musical with a Broadway twist, bringing light to hysterically funny circumstances in the workplace. It is about a hard- working janitor named, Al, who falls in love with an employee named Gloria.  He wants her to notice him, but knows janitors are hardly desirable to a woman as attractive as Gloria. Instead, he watches from afar. As he’s watching, he sees so much drama in the workplace that it gives him an excellent idea that will change Gloria’s perspective of him forever. Gloria, in the meantime, is engaged to man who hates anything to do with church, God, or religion.  In the end she comes to a crossroad. Will it be God, religion, or her man in the end?  The hit play “Workplace Drama,” embodies every stereo type that we encounter in the workplace. It’s entertainment and a message wrapped in one that is sure to satisfy our need for good theater, music, and comedy.

So what’s next for Ms. Tamera Hill?  ” We are looking forward to shooting our very first film this year for I Never Heard My Father Speak in Association with See Through Production and Mandate Records.”  Don’t miss Saturday’s hit stage play. Bring the family out for some laughs, some tears and some deliverance!!  To purchase tickets contact Mandate Records at (858)650-3190 or Business Matters at (619) 263-4200.  Hill is offering a 2 for 1 sale for Senior Citizens for her matinee show. Just have ID present. Show times are 3:30 and 7:00 p.m. For additional questions, contact (818) 691-0010.  Visit her online at   http://www.tamerahillplays.com/