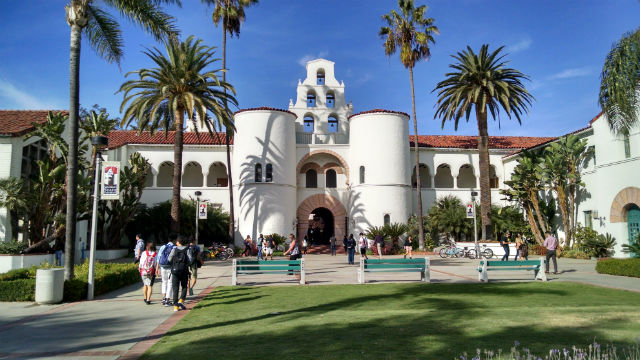 SAN DIEGO, Calif. (April 29, 2017) —The Campaign for SDSU has raised $800 million, exceeding its goal of $750 million, as the first-ever university-wide fundraising campaign comes to a close.

“On behalf of the entire university, I’m extraordinarily grateful to all of our donors,” said SDSU President Elliot Hirshman. He spoke Saturday evening at an event with some of SDSU’s more than 70,000 campaign donors.

“The campaign has changed every corner of the SDSU campus and impacted our entire university community,” he said. “It has laid a stronger financial footing for the entire university and created a culture of philanthropy that is critical to the university’s success today and into the future.”

The university launched The Campaign for SDSU in July 2007 with a goal to raise $500 million to benefit students, faculty and staff. That goal was increased to $750 million in 2014.

“The Campanile Foundation (TCF) believed from the very start that The Campaign for SDSU would succeed,” said Mary Curran, chair of the all-volunteer TCF board, the university’s fundraising auxiliary. “We will continue to find new ways to build momentum and help the university become even more successful through sustained philanthropy.”

Approximately $185 million was donated to endowed scholarships, which will be available to students in perpetuity, including student-veterans, honors students and students studying abroad.

SDSU received 138 gifts of $1 million or more. Among the most notable gifts of the campaign are a $25 million endowment from Ron and Alexis Fowler to support programs within the newly renamed Fowler College of Business and a $20 million scholarship endowment created by the late Conrad Prebys to support at least 200 students annually.

The Fowlers’ most recent gift was established as a matching gift, which challenges the university and its supporters to raise an additional $25 million for the Fowler College of Business.

While the Campaign for SDSU officially ends on June 30, 2017, the university’s need for philanthropic support is ongoing. State funding provides only 20 percent of annual operating expenses.

“Private giving will continue to be the bedrock of SDSU’s ambitions to advance academic excellence, hire and retain top-tier faculty and develop its research agenda,” said Mary Ruth Carleton, vice president for University Relations and Development, who led the 10-year campaign.

San Diego State University is a major public research institution that provides transformative experiences, both inside and outside of the classroom, for its more than 36,000 students. The university offers bachelor’s degrees in 91 areas, master’s degrees in 78 areas and doctorates in 22 areas. Students participate in research, international experiences, sustainability and entrepreneurship initiatives, internships and mentoring, and a broad range of student life and leadership opportunities. The university’s rich campus life features opportunities for students to participate in, and engage with, the creative and performing arts, a Division I athletics program and the vibrant cultural life of the San Diego region. For more information, visit www.sdsu.edu.