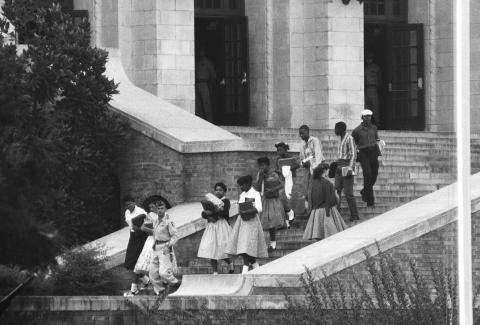 Tania León wasn’t familiar with the story of the Little Rock Nine when she was approached by The University of Central Arkansas to compose the opera to commemorate the 70th anniversary of the event, which took place on Sept. 25, 1957. Ironically, it’s what made her perfect for the job.

The Cuban-born and raised, multi-award winning musician, composer and conductor was tapped to compose the opera of the seminal civil rights moment, in collaboration with prominent African American scholar Henry Louis Gates, Jr. and Thulani Davis. A preview of the opera, which will be completed in 2018, will be shown Monday night, on the day of the anniversary, at the University of Central Kansas.

León is fueled by a humanist curiosity that defines her work as she defies expectations. Rejecting labels and preconceived notions, she delves deeper than most because she bypasses the easier questions in order to get to the true heart of the matter.

The nine African American students who walked into the segregated, all-white Little Rock Central High School, lead by President Eisenhower’s National Guard, must have known they were putting their lives on the line to take that important first step. Yet seventy years later, the nation still grapples with division and questions of race and equality.

Ahead of the premier of ‘The Little Rock Nine’, León spoke to NBC News to discuss her approach to the material, what really fuels racism and how you become a global citizen when you remember where you came from.

What was your approach to such an iconic moment in American civil rights history?

When the team at the University called me, I didn’t know anything about it. Working on this piece was very hard. Up to a certain point it’s distant because it’s something that happened seventy years ago, but look at the consequences of what those decades have brought up until today. Hearing how we express ourselves against each other—it’s terrifying. Hearing an individual say that the color of their skin is better than the color of another person’s skin — to think the capacity of a person is conditioned by the color of their skin, it’s absurd.

As an Afro-Cuban woman, did you identify with the struggle of the Nine?

I don’t like the codification of people based on skin color, religions, or preferences. The entity of the person gets completely abolished when they are grouped. It’s like saying someone is Latin American but not mentioning what country they are from, without defining culture. I have an ample mentality in terms of that, which is much more human.

Is that what made you take the job?

When I did the research, I was more than interested for the simple reason: I was born on the street Salud in between Oquendo & Soledad. I come from a cradle where we were all united by poverty. We were multi-racial, multi everything but what we had in common is that we were poor. So that kind of diversity is how I see the world and without diversity, there is no progress.

Since my arrival in the United States, I have tried to understand the mindset of people who feel they are better than others. And of course I have always seen it as a matter of convenience for one group that has certain —I don’t want to call it privilege —but people that take advantage of using a certain mechanism to take advantage of a group of people because of the color of their skin.