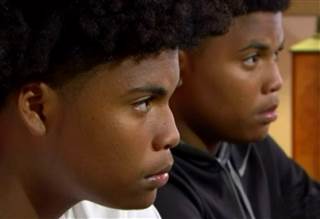 The twin teenage brothers in the back seat of a car that was fired upon by a Texas officer now charged with murder said in an interview that as they were driving away all they “heard was a cop start shooting the car.”

The front seat passenger, 15-year-old Jordan Edwards, was shot in the head and killed, and now-former Balch Springs police officer Roy Oliver has been charged with murder in the April 29 incident near a party.

Maximus Everette said he, his twin brother Maxwell, Edwards, another passenger and the driver of the car left after the police arrived and loud noises were heard. The car was driven by Edwards’ stepbrother, and Edwards brother was also in the car, according to a lawsuit filed on behalf of the family.

“I got in the car and they were like we just need to leave because we heard like some loud noises outside, and then, like, as we were driving away, all I heard was like a cop start shooting the car,” Maxwell Everette told NBC Dallas-Fort Worth.

He said officers put them in handcuffs after the car stopped and didn’t immediately check on Edwards. “They wasn’t like even like in the car even helping him or nothing,” Maxwell said.

Oliver allegedly opened fire on the vehicle with a rifle after another officer broke the vehicle window with his weapon, according to the warrant. Last week, The Balch Springs Police Department fired Oliver, who was hired in 2011, saying Oliver “violated several departmental policies.”

A warrant was issued by the Dallas County Sheriff’s Department for Oliver’s arrest on Saturday and he turned himself in to the Parker County sheriff’s office later that day, authorities said.

Oliver was booked on a charge of murder and was released on a $300,000 surety bond, according to jail records. Maximus told the station the arrest shows “we’re going in the right direction to get justice for everything that’s going on, and especially for Jordan.”

The Edwards family has filed a wrongful death lawsuit against Oliver, the city of Balch Springs and the police department.

The suit says the young men were trying to leave the area where the sounds resembling gunshots were heard, the driver heard someone yell “stop the f—ing car!” and before he could respond or react Oliver opened fire into the Impala, with the rounds entering the front passenger door and striking Edwards.

The suit also alleges that after the car stopped an officer used a racial slur after ordering the driver to exit the car and walk backwards towards police. The suit does not specify a dollar amount.

Balch Springs is a southeastern Dallas suburb of around 23,700.