Home Business Why Blacks Have Had 10 Times Less Wealth For the Last 40... 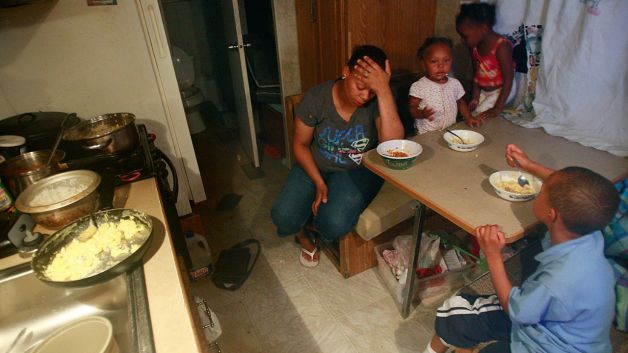 CNN/Kaiser Family Foundation released a new poll showing that 55% of blacks and 52% of Hispanics said it was easier for them to achieve the American Dream than their parents. That’s compared to only 35% of whites who feel the same way. Blacks and Hispanics who were interviewed said they felt that they have more opportunity currently in terms of education and jobs.

However, for the typical Black and Hispanic household, those opportunities haven’t translated into real financial gains. Even with earning a college degree, it hasn’t protected them from falling behind. In fact, the CNN/Kaiser poll found that Blacks and Hispanics with college degrees are not significantly more satisfied with their financial situation when compared to their peers without degrees.  Whites with college degrees, on the other hand, are generally more satisfied than their counterparts with less formal education.

Blacks/Hispanics still typically earn much less than whites, in part because whites dominate higher-paying fields, both as employers and employees, such as technology and finance. The income gap has held fairly steady for the past 40 years.

There is a huge gap, when it comes to wealth.  Whites have roughly 10 times the wealth of blacks and Hispanics. Over the past 25 years, the wealth gap between blacks and whites has nearly tripled, according to research by Brandeis University.

These results are credited mainly due to differences in home ownership rates. Most Americans’ net worth is tied up in their homes, but Blacks and Hispanics are much less likely to own the roof over their heads.

Unemployment in the Black and Hispanic communities is also a big issue. The jobless rate has historically been much higher for Blacks (nearly double that of whites) and Hispanics (almost 1.5 times that of whites), which contributes to their having lower income and wealth levels. Once unemployed it takes blacks, on average, an additional five weeks longer to land a job than it does whites.  Ironically, Hispanics, find new positions two weeks sooner than whites.

As to be expected, all these factors contribute to higher poverty rates among blacks and Hispanics. More than one in four black Americans are in poverty, and nearly that many Hispanics are as well.   The numbers are even more staggering when including child poverty rates.  Just under 11% of white children were in poverty in 2013, but 38% of black children and 30% of Hispanic children are poor.

The CNN/Kaiser Family Foundation poll was conducted August 25 through October 3, 2015, among a random national sample of 1,951 adults, including 501 Black and 500 Hispanic respondents. Results for all groups have been adjusted to reflect their actual national distribution. Interviews were conducted on conventional telephones and cell phones, in English and Spanish, by SSRS of Media, Pennsylvania. This poll was jointly developed and analyzed by CNN and staff at the Kaiser Family Foundation (KFF). Results for the full sample have a margin of sampling error of plus or minus 3 percentage points; for results based on African Americans or Hispanics it is plus or minus 6 percentage points. Read more about the poll.

CUNY Study Underscores the Enduring Vitality of the Black Press

Black Businesses Continue to Face Down the Pandemic