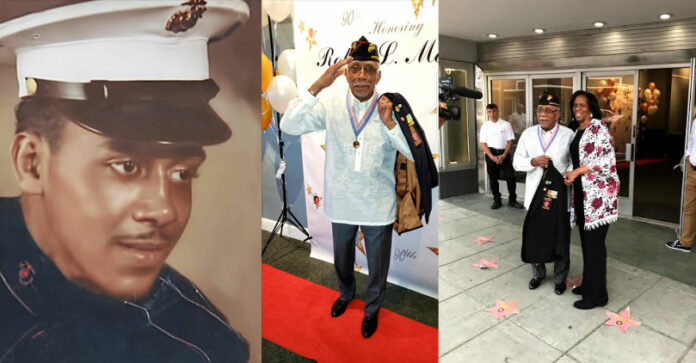 Saturday, August 24, Brooks Theatre on North Coast Highway in Oceanside was the location for the 90th birthday celebration of Mr. Robert L. Moore, retired U.S. Marine Corps Gunner Sergeant. Sergeant Moore entered the Marine Corp at the age of 17. He did his basic training at Montford Point near Camp Lejune, North Carolina. Montford Point has been made famous in the Black community because it was the training site for most Black Marines.

Mr. Moore worked as a Food Service Technician Specialist both overseas in Korea, Japan, North Vietnam, the Philippines, Guam and Thailand. Later, upon returning to the states, he worked at Camp Pendleton Marine Corp Base, and the Marine Corp Air Combat Center.

In 1972 Gunnery retired from the Marine Corps, and took a civilian position at the Naval Hospital on Camp Pendleton Marine Corp Base. In 2012, after almost 70 years since joining the Marine Corp, he retired and was awarded the Congressional Gold Medal in the Nation’s Capital in recognition for his training and service as a Montford Point Marine. Mr. Moore was recognized by the City of Oceanside also in 2012.

Guests enjoyed the music of Trumpeter Milkshake Mayfield and songstress Kristine Mayfield as well as local talent LaDeidra Schenck. Rap A Tap dancers along with Iverson Harding gave an arousing performances to set the stage for circa 1930’s night at the Apollo theater party theme. After receiving congratulations, birthday wishes and appreciation letters and awards from the likes of David H. Berger General, U.S. Marine Corps Commandant of the Marine Corps., United States Senator Kamala Harris, The Los Angeles Chapter of the National Association of Black Military Women, The City of Oceanside, and The National Montford Point Marine Association Inc., Oceanside Chapter #44.

The San Luis Rey Bakery made the birthday cake while Brothers Desserts provided the Ice Cream Bon Bons and Pop Pa’s Popcorn the popcorn. Young Marine Volunteers from Camp Pendleton came out and escorted guest as well as lent a hand in presenting the birthday cake to the honoree Robert L. Moore.

In attendance were over 110 guest with family and friends from as far away as Washington, DC. The honoree Robert L. Moore has been asked to tell his life story to the StoryCorps organizations who broadcast weekly on National Public Radio and archive each story in the Library of Congress in Washington D.C. Mr. Moore will be receiving a proclamation from San Diego County come this September 2019 after the article by San Diego Union Tribune ran earlier this month highlighting Mr. Moore’s career and achievements.

Robert Moore’s 90th Birthday celebrates a life well lived and a service to many others.