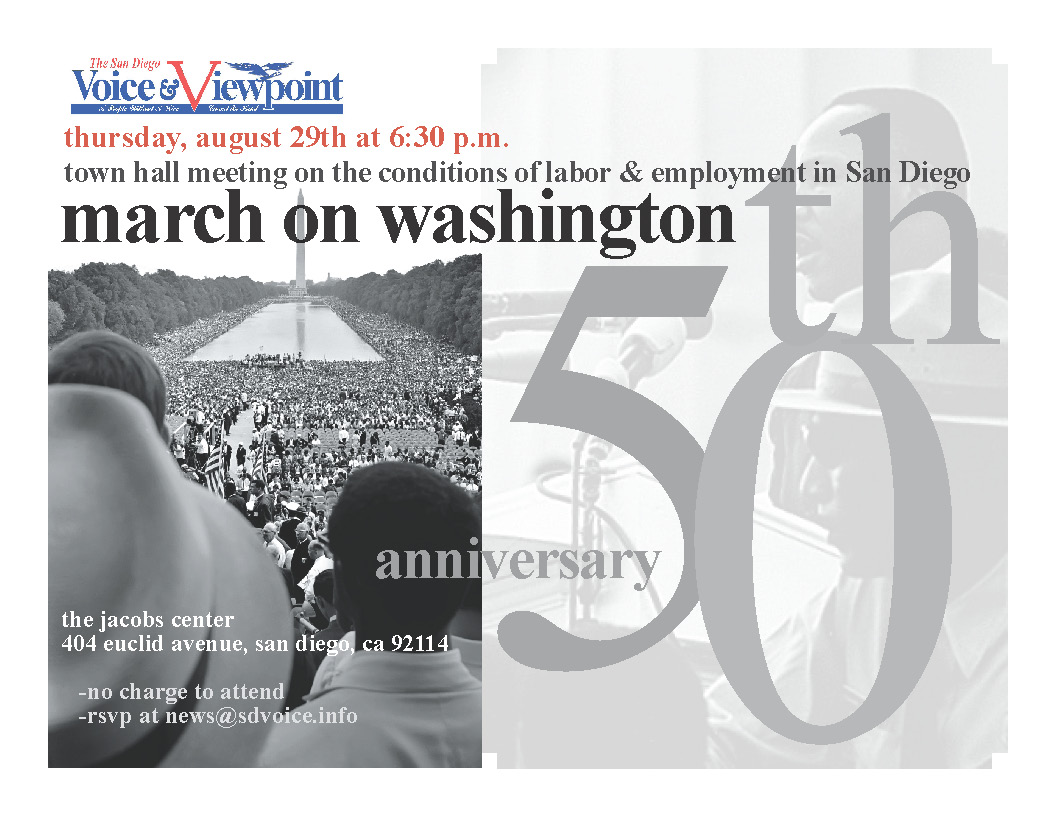 Next month on August 29th, the San Diego Voice & Viewpoint Newspaper will hold a community town hall meeting in celebration of the 50th Anniversary of the 1963 March on Washington, D.C. Nationally, there will be a March in Washington, D.C. on Saturday August 24th in celebration of the 50th Anniversary March. While it has been estimated that upwards of 750,000 people will attend that event, we know that many of us here, if not most, cannot afford to make the August 24th March due to health, finances and a number  of other reasons. Since jobs was one of the major issues that drew so many African Americans in 1963, we would like to address the employment issue facing us 50 years later. We have overcome placing an African American in the White House, but he has not helped us overcome unemployment.

We want the rank and file of organized labor to attend this meeting as we not only discuss challenges to Blacks in the workforce, but also the degree to which they are being included in the leadership and decision making of our local unions. We need to discuss employment issues in  both the public and private sectors as well as language and other barriers to full employment. Many of our immigrant brothers and sisters face a variety of additional issues which limit their job options to certain industries like parking facilities and taxi cab drivers. They too face challenges which many of us are not aware of and should know about.

As with all our town hall meetings, they are intended to give you, the participant, an opportunity to voice your views and not have provide an audience for a host of speakers. We are currently in discussion with a number of organizations starting with the San Diego NAACP  and several African Americans from organized labor; the sponsors of the Women’s March and our ministers as well as others are encouraged to contact the newspaper so we may plan for a real and meaningful experience in celebrating this great event.

Please let us have your comments and suggestions by email, fax, Facebook or letter.