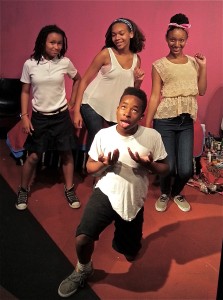 In an era that has chipped away at the role of arts in the schools, Jennie Hamilton’s Community Actors Theatre (CAT) is an oasis of talent and cultural enrichment. The Oak Park theatre’s latest production, “Three Crazy Girls & One Stink Boy,” which closed last weekend, is a shining example of what is possible for the community and young people when parents, sponsors, educators and committed theatre lovers  come together.

Written and directed by Tanya Fuad, “Three Crazy Girls & One Stink Boy” is a moving tale of four siblings, cruelly orphaned by the civil war in Liberia, and adopted into an American home. The play chronicles their journey as they struggle to adjust to a new life and yet hold onto the memories of the life they left behind.

Through the lens of the play, which engages us with humor as well as tears, we are granted a moving portrait of war from the vantage point of young children. Liberia was ripped apart by 14 years of successive civil wars, beginning in 1989, claiming the lives of more than 200,000 Liberians and displacing others into refugee camps. Entire villages were emptied and little or nothing of the education system remained as the majority of schools in the country were destroyed.  And perhaps cruelest of all was the devastating impact on children. Nearly all youths witnessed terrible atrocities, many of which are alluded to in the play.

Oreta, Hana, Coco, and Donzo, the characters in the play, are four of these children. The “White Lady” of the story, who never appears onstage, is the woman who adopted the orphaned siblings and has provided a safe place for them as they continue to find their way and carve out new lives.

The story is torn from the pages of playwright Fuad’s own life. Born in Bagdad to an Iraqi Kurdish father and an American mother, Fuad was a Peace Corps volunteer in Liberia from 1986-1988, leaving just before the brutal civil war broke out. She later returned to the village she had known, only to find it pillaged and the house she had lived in burnt to the ground. When she returned home, it was with four Liberian siblings that she adopted, and from these events and experiences, wrote the play.

The characters capture our hearts from the very beginning. Oreta played by Tyrah Majors is the eldest and she spills forth many of her wretched memories in passionate monologues.  “Oreta tells ugly stories,” one of the children complains. And so she does, in heart-wrenching detail, re-tell horrors that fascinate and repel her siblings. Janiece Island plays Hana, the next eldest, with great sensitivity, interacting with each of the characters in a way that holds them close even when they are at odds.  Coco (bright-eyed and effervescent Yadira Derskins), loves to parade before the mirror: “I was the cutest baby ever,” she preens. Derskins captures the character’s essence with youthful exuberance. Osiris Alexander is a standout as Donzo, the youngest, and the title’s “stink boy” (showers are anathema to him), who explodes with energy, lovably obnoxious as he grates on his sisters’ nerves and painfully endearing as he searches for the truth of his own story in the fable-like tellings of Oreta.

These are fine young actors, all students in San Diego area schools, whose talents and intellectual curiosity have clearly been nurtured in the cauldron of CAT’s quality theatrical training ground. “It is an honor to be part of this play,” said 16-year old Tyrah Majors, in a post-show conversation, especially having the opportunity to have a “heart-to-heart” with the real-life “Oreta,” who visited with the cast, deepening her understanding of the character and the times (three of Fuad’s four children attended performances and visited with the actors during the play’s run). “I was amazed I got the part,” confessed 11-year-old Osiris Alexander. “I learned I can do something more than video games when I set my mind to it,” he chuckled. Yadira Derskins (11) and Janiece Island (15) were equally buoyed by the experience of learning history firsthand and by the connections they formed with their characters and with each other. “We’re best friends,” they all agreed and all plan to continue with their acting endeavors.

Fuad’s story is compelling and, with its beautifully drawn characters and global significance, is certainly worthy of further development. Kudos to the entire cast and crew for a fine production.

After leak, religious rift over legal abortion on display