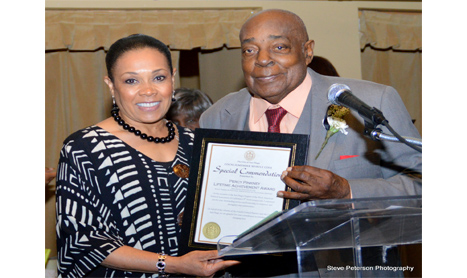 “Celebrating the fighters within our community,
If you see a good fight – get in it”

On Saturday, February 8th, 2014 The San Diego Chapter of BAPAC (Black American Political Association of California) held its 5th Anniversary Community Gala at The Jacobs Center @ Market Creek 404 Euclid Avenue, San Diego 92114. As the 300 plus BAPAC supporters entered the Jacobs Center, the atmosphere was electric as old friends got reacquainted and new friendships were created.

During the evening, distinguished gala guests such as Assemblymember Shirley Weber, Interim Mayor Todd Gloria and ACLU Executive Director, Norma Chavez-Peterson, among others, took the time to address the crowd from the podium, constantly reminding event attendees that as communities of color, we have many battles to continue fighting. Dr. Weber gave details about the committees she’s working on in Sacramento, and the impact her presence is having. Gloria reminded San Diegans that while we remain America’s Finest City, there still are many issues to be addressed within the city’s confines. “There are over 10,000 homeless people in San Diego, and we need to do something about it,” he urged. Chavez-Peterson gave a fire-filled statement about the things the ACLU is doing, and the many injustices that they are addressing, encouraging the Black and brown communities to stand up and fight recidivism among other things. “Have you read the book called ‘The New Jim Crow’?” she asked. “If you haven’t, put that on your priority list for this year!”

New Executive Director for the Rueben H. Fleet Science Center was invited to attend by Councilmember Cole and shared a few words about opportunities the center is embarking on to save our children from being at the bottom of the list when it comes to math and science. “Do you realize that California’s children rank 47th for math and science?,” an astonishing figure to say the least. He encouraged the community to step up and join him in changing that statistic among our youth.

The mission of BAPAC is to work for the maximum effective representations of African Americans and all citizens in the political, economic, and educational systems of San Diego County! The San Diego Chapter of BAPAC is a visionary “Movement” that focuses on ensuring that the Black community in San Diego County is well positioned to remain a major economic, social and political force in Southern California! You can reach BAPAC at PO Box 741336 San Diego CA 92174 or (619) 962-3888 or email for more information www.bapacsd.org.