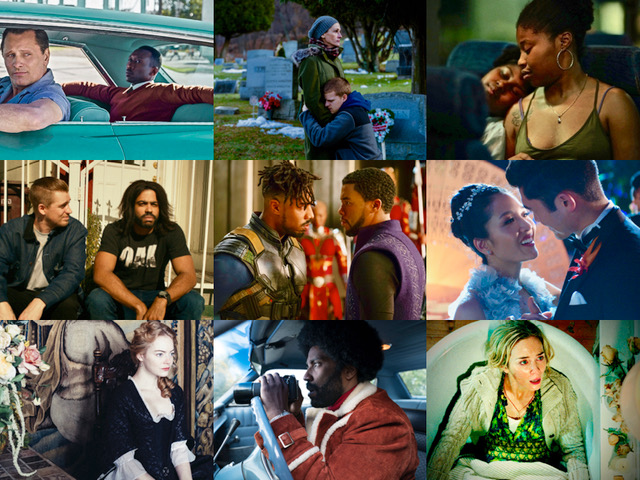 In 2018, the stories told, talent on view, compelling characters, emotions expressed,and genres stretched were just amazing. It was more than enough to make viewers track films from the theaters to streaming services. Or vice versa.

Check out the year in movies. Enjoy.

The plague of drug addiction hits the tony suburbs and writer/director Peter Hedges takes his audience to the front door of a home that is bearing the brunt. Julia Roberts soars as the distraught mom trying to save the life of a duplicitous son, expertly played by Lucas Hedges. Courtney B. Vance co-stars in this compelling and cautionary family/drama.

The late Stan Lee left behind a key to the future. That key was Black Panther, as envisioned by the very intuitive director/writer Ryan Coogler. The African nation of Wakanda became the world’s #1 tourist destination ($1.3B at the box office). It’s supermen (Chadwick Boseman, Michael B. Jordan, Daniel Kaluuya) and superwomen (Lupita Nyong’o, Danai Gurira, Letitia Wright) were artfully displayed (cinematographer Rachel Morrison) as they embodied Black power and pride.

Of all the films that tackled racism and the PSTD a black man experiences as a result, this very grassroots indie captured that feeling the best. Set in gentrifying Oakland, CA, the ambitious script by lead actors Daveed Diggs and Rafael Casal chronicles a time and place when inner city black neighborhoods are disappearing and the inhabitants are stressed—every day. Wonderful direction by Carlos López Estrada.

Leave it to filmmaker Spike Lee to find the most hard to believe but true story about a black cop (John David Washington) who infiltrates the KKK with the aid of a Jewish police officer (Adam Driver). The undercover brother even hoodwinks David Duke! A nervy and very informative look at the dimwits who joined the Klan and the brave policemen who thwarted their moves. Considering the times we live in, the 1970s subject matter has a very contemporary appeal.

This jolly film is the first Asian/American movie to get a major release in 25 years! A stellar cast—Constance Wu, Henry Golding, Michelle Yeoh and Awkwafina—turn a rags-to-riches love story into the best romantic comedy of 2018. Director Jon M. Chu with writers Peter Chiarelli and Adele Lim turn a golden opportunity into solid gold entertainment.

A very unlikely story, based on true events, features the best acting duo of the year. The brilliant scholarly actor Mahershala Ali plays a concert pianist who is driven around The South, in 1962, by a burly Italian chauffeur/bodyguard played hysterically by Viggo Mortensen. The most unlikely director in the world, Peter Farrelly (Dumb and Dumber), tells the tale with a nod and a wink and peppers it with social and racial themes, real drama and historical facts. An organic crowd pleaser.

Kids separated from their parents and relegated to foster homes and institutions should have their stories told. New actor-turned-director Jordana Spiro uses a script she co-wrote with Angelica Nwandu as a basis for her poignant ode to troubled youth. Dominique Fishback plays the train wreck of an 18-year-old older sibling in the process of leading her 10-year-old sister (Tatum Marilyn Hall) down the wrong path. Vulnerable characters you have to love.

Every 10 years, writer/director Tamara Jenkins makes a feature film. It’s worth the wait. A neurotic couple, nearing middle age, tries to have a child. Previously, they were so caught up in their lives that by the time they decided to have offspring, they had to scramble and hope IVF would pay off . Tough challenge for them. Great laughs for the audience. Kathryn Hahn plays the fretful wife with anxious humor and Paul Giamatti is the put-upon husband. A sweet, delicious adult comedy.

This is the absolute best use of sound effects ever devised for a horror film. A very innovative but scary take on a post-apocalypse world where demons’ attacks are instigated by the slightest sound. Ingeniously concepted by actor/writer/director John Krasinski who guides his wife Emily Blunt into the performance of her career as the protective mom.
Unlike many news organizations, Voice & Viewpoint delivers content that matters to you. Help us keep it that way by making a generous donation for as low as $2. Your support will fund local, investigative journalism for the community, by the community.