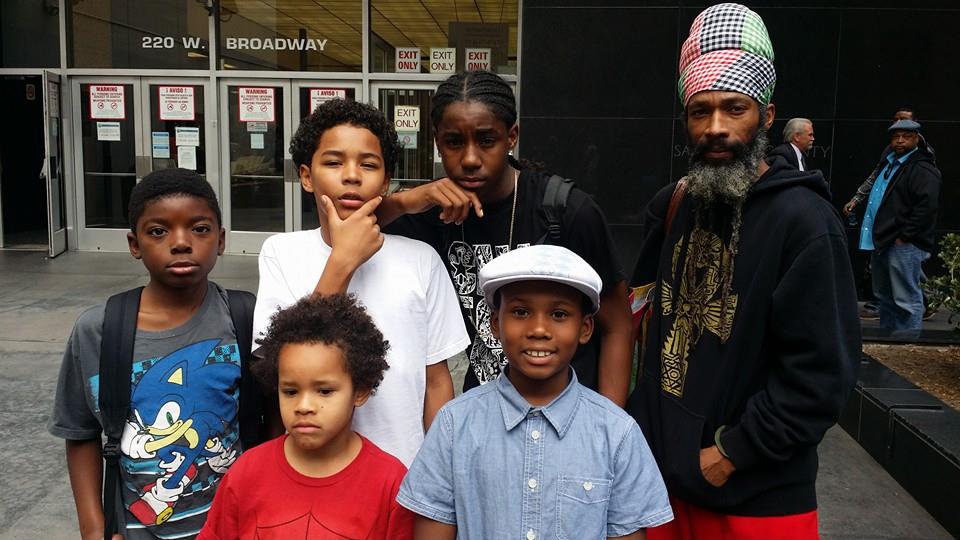 Unfortunately the first bit of information many young African Americans learn about their history in public school education is the struggle and turmoil of slavery. Many of the profound scientific, philosophical and spiritual teachings developed during the thousands of years Africans thrived are left out. The omission of this rich history can make it hard for young black students to feel proud about their origins and culture. Kwaku Abdallah, 46, has dedicated his life to enlightening young black male students by instilling Afro-Centric teachings and modalities through his charter school Beta Selam Academy.

Abdallah hails from Detroit but his distinct patois and long beard give him a foreign and ancestral essence. After serving with the Marines, Abdallah come to San Diego to further his education. He attended Grossmont College studying political science and San Diego State for pre law at San Diego State.

“That political astute activity let me know what the world was really like,” said Abdallah.

Observing the systems of education and political policies Abdallah felt created disadvantages for black youth prompted him to delve into the realm of education. Determined to create a space to counter the miseducation of his people, Abdallah begin his journey as a teacher highlighting the rich history of Africa.

“From my time coming through my journey of education I knew that this is what needed to be done, but there wasn’t an environment out there that would allow it to go on,” said Abdallah.

Fortunately, Abdallah was able to connect with Dennis Newsome, the founder of Os Maladros De Mestre Touro Capoeira studio on Imperial Avenue. Along with teaching Brazilian martial arts, Newsome also hosted a summer educational program for youth. The space felt like home to Abdallah and a partnership was formed.

“He expanded (the program) to another level,” said Newsome. “It’s better because the education component comes from an African perspective.”

The summer program eventually evolved into Beta Selam Academy, an all-boys S.T.E.M school where Abdallah has served as headmaster for over a year.

One of the unique qualities of Beta Selam Academy is their implementation of collaborative learning. Student’s ages range from 7 to 14 and have the freedom to assist each other in the learning and teaching activities.

“I would never want a classroom with a bunch of young children of the same age and expect them to act in a mature fashion,” said Abdullah. “By (different age groups) being together they get introduced to words and concepts they may not be introduced to otherwise.”

There are currently 5 young men enrolled in the academy creating an intimate environment where proper attention can be directed at the needs of each student. Their curriculum matches state requirements for education, however elements such as learning Swahili and reciting the Nguzo Saba seven principles of Kwanza every morning before the school day begins highlight the Afro Centric spirit incorporated.

“I cry at their excellence. But I can be just as angry at how they do our boys out there,” said Abdullah. “We keep putting our children back in the same systems we complain about expecting something different. We had to because we didn’t have alternatives.”

Marco Jones, 14, was a member of Newsome’s summer program and transitioned into Beta Selam Academy upon its inception.

“It’s a small bubble here. The amount of attention everyone gets in here makes the process faster and everything go by easier so you can retain the information you’re being taught,” said Jones. “Other students (at public schools) get held back because one student isn’t up to speed. Here we get to remain focused.”

Jones excels in the fields of Engineering and Chemistry. He plans to pursue a career implanting both disciplines after he graduates college.

Machai Lewis, 11, has a passion for cooking and has accepted the duty of ‘executive chef’ of the Academy. He prepares snack and lunch for the other students. When asked about his feelings about learning in an Afro-Centric environment, his response was very clear and telling of the benefits the academy can give young men of color.

“It makes me feel better about myself to know that there’s nothing wrong with being African,” said Lewis.

You can learn more about Beta Selam Academy by visiting www.betaselamacademy.org