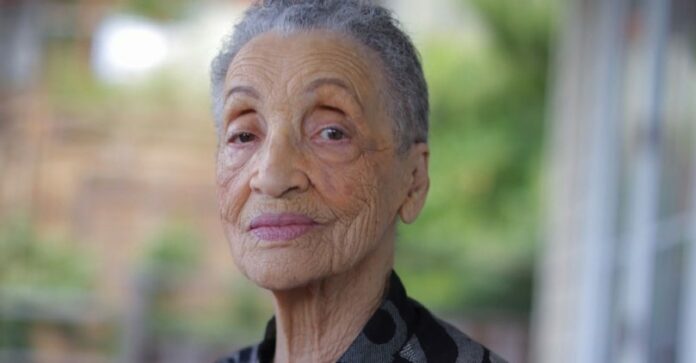 “For now, we will need to hire in-home care to keep her safe and give her the best possible opportunity for recovery, recognizing that, at 98 years old, recovery is not a given,” Soskin’s son, Bob Reid, wrote on the GoFundMe site on Sept. 24. “We want her to have the best possible care during this challenge.”

Betty Reid Soskin is renowned for numerous reasons, including the insightful dissertations she regularly gives at the Rosie the Riveter Museum in Richmond, Virginia.

There, Soskin regularly speaks on Richmond’s history, race, and social change, including her own life as a black woman working at the city’s segregated union hall.

At 98, Soskin is the country’s oldest park ranger. She’s earned a bevy of honors, including from President Barack Obama.

Today, the famous park ranger is recovering from a stroke, and her son, Bob Reid, said expenses have continued to mount. Reid has started a GoFundMe campaign to help with medical care.

“For now, we will need to hire in-home care to keep her safe and give her the best possible opportunity for recovery, recognizing that, at 98 years old, recovery is not a given,” Bob Reid, wrote on the GoFundMe site on Sept. 24. “We want her to have the best possible care during this challenge.”

In a Facebook post on Sept. 22, Reid wrote that Soskin showed evidence of a stroke while working at the Rosie the Riveter World War II/Home Front National Historic Park. A visit to the hospital confirmed that fear.

“She continues to improve,” Reid later wrote. “She seems to be getting on with being alive! There is much to reconnect with. Thank you all for your support and for caring for her!”

In an Oct. 9 post, Reid said the International Boilermakers, Iron Ship Builders, Blacksmiths, Forgers, and Helpers, sent in a check for $10,000.

“The International Vice President, Tom Baca, told me about his first-time meeting Betty. He said it was at a big gathering,” Reid wrote.

“He was wearing his suit and had given a speech that he was pleased with and which had gotten an enthusiastic response from the crowd. He told me that as he was accepting congratulations and was feeling pretty good about things, this diminutive woman came up to him and said, ‘I will never forgive the Boilermakers for what they did to me.’ His stature shrunk. Hers grew.”

“He proceeded to learn about the history of the Boilermakers and the ‘Auxiliary’ unions, which kept men of color out of the Union. Tom began to see things through a different lens and now says he is grateful to Betty.

“He said the Boilermakers Union now embraces and acknowledges that past.

“It was obvious that there was a deep caring in that office for my mother. I am grateful for his initiative to make this check happen! Thank you, Boilermakers Union, for your generous donation to Betty’s Fund.”

In a 2018 feature in Glamour, which named Soskin its “Woman of the Year,” the magazine noted that Soskin was 85 when she started work as a park ranger.

Soskin had worked as a field representative for California Assemblywoman Dion Aroner, who asked her to sit in on planning meetings for a new park.

During meetings, Soskin would enlighten those assembled with tales of history.

She “quickly saw that, if she didn’t speak up, the park would portray a whitewashed version of history,” according to Glamour.

“There was no conspiracy to leave my history out,” she says in the article. “There was simply no one in that room with any reason to know it.”

She regaled the audience with tales of working at an all-black union hall during World War II. Soskin said she briefly worked in an all-white branch of the Air Force – they didn’t realize she was black when they hired her.

Tom Leatherman, the park’s superintendent, told Glamour that Soskin motivated organizers to bring more people to the table. “Because of Betty, we made sure we had African American scholars review our films and exhibits. We also made sure we were looking out for other, often forgotten stories — Japanese American, Latino American, American Indian, and LGBTQ narratives — that were equally important.”