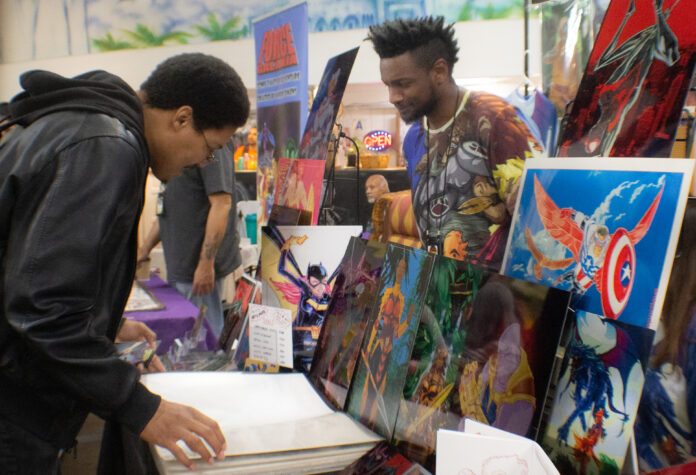 This is the third Black Comix annual event. The first two were held at the Malcolm X Library in San Diego, California. There were over a dozen artists present, including Jason Reeves, Khaulid Hunter, Matthew Jones, Michael Scott, and Aubree T. Rose.

Topics of discussion covered the realities of the comic book industry, and how, in some cases, decision makers in the industry often want to purchase black comic book characters and change their color.

“Don’t get discouraged by the mainstream view of you or your craft,” Reeves said.

The harmonic chatter topped with cultural melodies of soft jazz playing set the scene for a Sunday afternoon with plenty of activities for kids like face painting.

Vegan and vegetarian-friendly foods and beverages were on hand for all to enjoy. People from all backgrounds poured into the Worldbeat center, with curious eyes and humble pockets. Those from the youngest to the oldest comic book fan could be spotted.

In San Diego, the land of Comic-Con, the cost to reserve tables and vending space are too high for up and coming artists. Hosts like Cheatom and Jones make it possible for artists of modest means to have their artwork on display. Artist Brian J. Lambert, who started out last year with a backpack and a couple of prints, is now a vendor this year.

“Believe in yourself before anyone else believes in you. It’ll do wonders for your career and life. That’s what Black Comix is about. Us Doing Us,” Keithan Jones said.