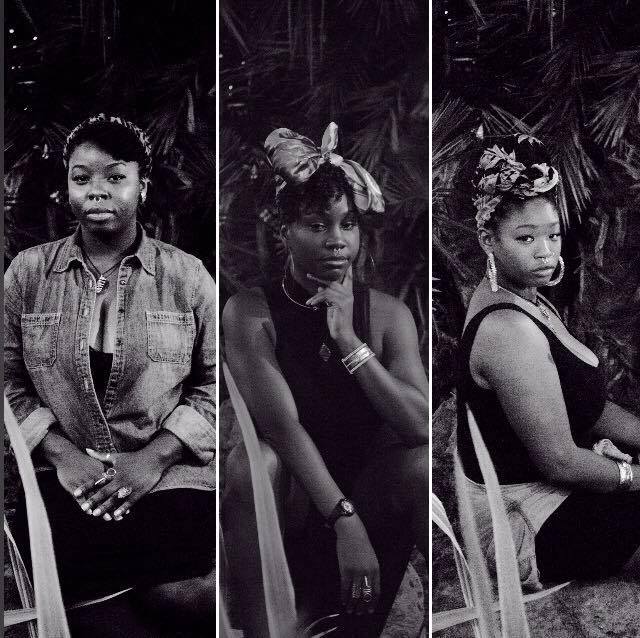 Black Girl Magic is a term that gets thrown around easily these days. Unfortunately, it seems to be for more promotional reasons than diving into the true meaning of the phrase and the women who put their magic to use daily. Ashley Wilkins, Joann Guillory, and Ardese Guillory are powerful reminders of what happens when women get together and align their magic, talents and services to the communities they live in.

The three young business women have been friends since childhood. Joann and Ardese are sisters, and Ashley has become like a third family member. The idea for the mini market came about when Ashley, in an attempt to raise money for her cell phone bill, decided to set up a table in public to sell her book.

“I was by myself, I didn’t have anyone to watch my things and it was kind of scary at first,” Ashley said. “But then as the days went on, I noticed how much attention I got and how much people actually loved to see me sitting there. I was already aware that Joann and Ardese had businesses I liked and I thought it didn’t make any sense for me to sit out here by myself when there are two other entrepreneurial women that I actually know, have family ties and have some type of solidarity.”

After Ashley proposed the partnership, Joann and Ardese were tabling their products with her the very next day. They’ve been sharing their gifts with the public since June 28th of this year.

Joann started her skin care line towards the end of her college years. People would often comment on how great her skin looked and she felt an urge to make a business out of it.

“I just decided to be that gateway for whoever is interested in transitioning. I realized it became bigger than me and it was more about getting people off of product that are causing us health issues and things like that. Helping them transition and understand what’s in the product on the shelf vs what I’m trying to offer.”

All of Joann’s products are handcrafted utilizing organic skin care alternatives which include facial cleansing scrubs, body and hair butters, soaps and moisturizers.

Death of a Serial Monogamist

Ashley began writing poetry at a young age but only saw it as a hobby at first. As she continued to write and eventually share her work, she always received great responses from those who heard it. After getting out of the Marines, Ashley made the decision that she wanted to be a writer for the rest of her life. Heading her mother’s advice, Ashley put her collection of poems together for her book ‘Death of a Serial Monogamist’.

“The collection of poem presents the key to understanding dysfunctional relationships from a female perspective. It lets women know its ok to find yourself and build that before you decide you want to bring someone on for the ride. It can be a detrimental path if you involve people before you’re even ready to deal with yourself.”

Ardese started her business after receiving encouragement from Joann and her mother. She’d always been interested in watching a lot of ‘Do it Yourself Videos’ on YouTube and kept running into jewelry videos during binges. One day she decided to try and make some jewelry herself and a new passion was born.

“At first I wasn’t really trying to make it into a business, it was more just for fun to show people you can do things by yourself. But people kept telling me I should sell it. I make the jewelry with the intent of bringing someone good vibrations. That’s why I use the stones I use. I want people to feel good and not necessarily have to spend a whole bunch of money to look cute.”

The mini market isn’t exclusive to these three businesses. They often welcome other entrepreneurial women to showcase their work as well in a safe space.

In the future, Joann, Ardese and Ashley plan to expand the mini market into a nonprofit to provide services for women including yoga, book classes, jewelry making, skin care, self-defense and debt management.

Yes, Black Girl Magic has been used often, but these young women have the authority to define it for a higher purpose.

“I believe that black girl magic is the definition of being fabulous no matter who you are and realizing that as soon as possible, said Ashley. “We’ve all dealt with insecurities growing up with not feeling beautiful enough. Accepted enough, not light or dark enough. All of these things with being a woman period. BGM allows us to embrace that term on a daily basis.”

“Black girl magic represents unity,” said Joann. “Ever since we’ve done this, I’ve felt a closeness with my sister, Ashley and any other black women whose come across. It’s like a secret club now. They’re all part of it. The vibe makes them feel special when they come across our table.”

Visit the Black Girl Magic Mini Market Facebook Page for more information on where you can find products and contact to sell your own.