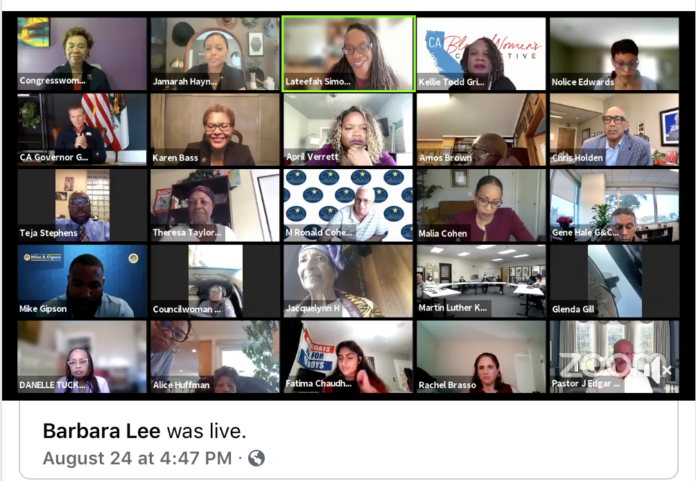 Each of the speakers took about one minute to voice their support for the governor and share why they intend to vote ‘no’ on the recall. Many of them also spoke out against controversial recall candidate Larry Elder, who is L.A.-based radio talk show host and who says he not an African American but an American who is Black. He is the leading candidate vying to replace Newsom.

“We come together today as African American leaders because we understand the danger before us. We understand this is a right wing move and we’re not going to let it happen,” said U.S. Congresswoman Karen Bass (D-CA-37). “We can’t get confused by Larry Elder. I don’t care what he looks like. We know Larry Elder very well in Los Angeles. He has built his career on attacking black leaders.”

The meeting began with a prayer delivered by the Rev. Amos Brown, pastor of Third Baptist Church in San Francisco and president that city’s NAACP branch. Brown prayed for the “redemption of our democracy” and that the promise of the nation be upheld. Congresswoman Lee echoed Congresswoman Bass’ support for Newsom.

“We know that the health of our children, our neighbors and our communities depend on Governor Newsom’s leadership. He’s been there for us, and we will be there for him,” she said. California Superintendent of Public Instruction Tony Thurmond shed light on unprecedented education spending Newsom helped make a reality in the state.

“Our governor has given our schools a $123-billion budget for education. A record budget. It includes funding for broadband, mental health, community schools, universal meals for all kids, universal pre-school for all 4-year-olds, COVID tests, PPE and anti-hate. We don’t recall governors who do good things for African Americans and for all people. We say ‘no’ to the recall.”

Malia Cohen, member of the California State Board of Equalization, called Black women to action, stressing that the recall election is especially urgent for women’s rights. “If we lose Governor Newsom, we are losing our reproductive rights, we are losing our opportunity to have a champion that has been helping us fight the fight for child support and helping us lead the way for universal Pre-K. This is a human being that is an ally.”

San Francisco mayor London Breed thanked Newsom for believing in her and first appointing her as well as providing logistical support to her city. “Governor Newsom has been there for us. He has answered our calls. He has been active and reached out to us on so many different levels. And what I don’t want to do is to go backwards and stopped the progress we have been making,” Breed said.

“More importantly, I want to express that Gavin Newsom has been an amazing supporter and friend to African Americans – not just in his capacity as governor but when he served here as mayor of San Francisco,” Breed continued. “The first position I was appointed to was on the San Francisco Redevelopment Commission and Gavin Newsom appointed me. A lot of people think it was Willie Brown. It was not Willie Brown. It was Gavin Newsom.”

Brown was the first Black mayor of San Francisco and a former Speaker of the California Assembly. Newsom, who joined the call, expressed his gratitude for the support he’s received thus far and reiterated the stances he plans to champion as governor. He pledged to continue to put women in positions of power, to build on economic and workforce development strategies for minority communities, and to continue to reform the public education system in California. His most candid moment came during a brief question-and-answer session near the end of the meeting. He was responding to a question posed to him by California Democratic Party Black Caucus chair Taisha Brown about his agenda for Black Californians once the election is over.

“This is a point of passion for me. This is a point of pride that I didn’t just come to the issues of the African American community in the last 6 months since this recall became real,” he said. “This has been the cause a good part of my life, working with Rev. Brown and so many other leaders on this call. I look forward to continuing this work hopefully for many years to come when we defeat this recall.” Voting in the recall election has started in California’s 58 counties. Voters can return their mail-in ballots now by mail or at designated drop-off stations or polling centers in their counties. Or they can show up to the polls on election day Tuesday, Sept. 14, to cast their vote.