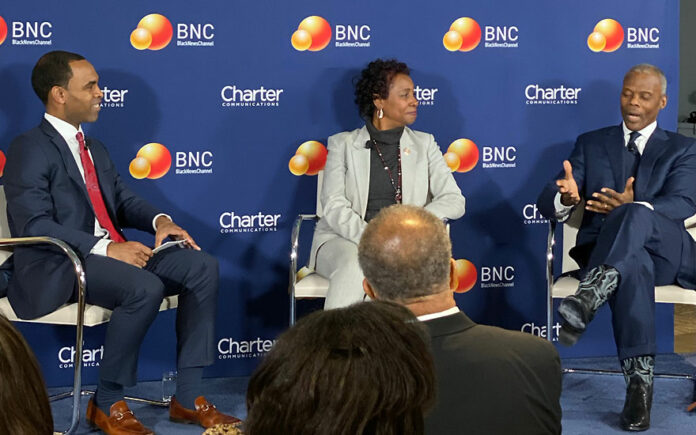 Congresswoman Karen Bass (D-Calif.), the chair of the Congressional Black Caucus and Congresswoman Yvette Clarke, the chair of the House Committee on Energy and Commerce, joined a gathering of BNC officials, anchors, and other guests at a reception on December 3 in Washington, D.C., to toast the launch of the network.

As the historic launch on January 6, 2020, of the Black News Channel (BNC) approaches, officials can count members of Congress among those eagerly anticipating the new platform.

Congresswoman Karen Bass (D-Calif.), the chair of the Congressional Black Caucus and Congresswoman Yvette Clarke, the chair of the House Committee on Energy and Commerce, joined a gathering of BNC officials, anchors, and other guests at a reception on December 3 in Washington, D.C., to toast the launch of the network.

“This has been long in the making,” said BNC’s Vice President of Community Affairs and former Tallahassee, Florida Mayor John Marks.

“When you see what we’ve done and what we’re going to do, it will knock your socks off,” Marks stated.

Bass called the fledgling channel a necessity for African Americans and others who seek a different perspective than what’s available through other news outlets.

“Right now, we have a lot of opinion in the news,” Bass stated.

“There are 54 members of the Congressional Black Caucus who want to be a part of this because you don’t see us, and you don’t hear about us [through mainstream news],” she said.

With a partnership with the National Newspaper Publishers Association’s Black-owned newspapers and media companies, the BNC expects to fast become the top destination for all who want to consume African American news in print, on television and mobile devices.

An independent network that’s minority-owned and operated, BNC will be the nation’s only provider of 24/7 cable news programming dedicated to covering the unique perspective of African American communities.

The channel is the endeavor of the network’s visionaries and co-founders, Chairman J.C. Watts, Jr. and CEO Bob Brillante.

“I remember going to West Africa with a bipartisan delegation that included Democrat William Jefferson,” said Watts, the former Republican congressman out of Oklahoma.

“We saw the little huts and where they kept African people at the door of no return to never see Africa again. But we also saw clinics, doctors, the building of hospitals, lawyers, and others.

“That is the mission of the Black News Channel. There’s more to the African American community than what we see,” Watts stated.

During the December 3 reception, Watts participated in a fireside chat with Clarke and Waldo McMillan, the vice president of Legislative Affairs at Charter Communications.

“We don’t have as many opportunities to view ourselves and to have our narratives authentically portrayed through those who have similar experiences,” Clarke stated during the engaging chat before nearly 200 guests.

“What’s significant about the BNC is that it will be a reflection of people of African descent. In my district, I have people from around the world, the [African] continent, the Caribbean, South and Central America.

“They’re all seeking knowledge and a viewpoint and lens that speak from their experience. So, I’m excited about this,” Clarke stated.

Watts noted that the BNC would be culturally specific.

“Rarely do you hear anyone on any network today talking about Sickle Cell Disease, which is a disease that primarily impacts African Americans,” Watts stated.

“By and large, white people talk about stuffing and pumpkin pie. That doesn’t mean we can’t interchange those dishes, but culturally specific to us would be sweet potato pie and cornbread dressing. We have different cultures, different meals.

“But, it’s a lot of things like that we never hear or see in mainstream media when it comes to African American culture.”

Watts also said it was important to acknowledge Charter Communications’ role in the launch of the BNC.

“If someone thinks you can do this without distribution, it’s a pipedream. Charter came along and bought into our vision and understood where we were going,” Watts stated.

“They could have seen it as risky, and I suspect that someone sitting at the table said, ‘I’m not so sure,’ but they did it, and it made us real. Things have fallen into place. We have over 60 people employed in Tallahassee, and we have bureaus in New York, Atlanta, Washington, and other areas.”

Watts, who was a star quarterback in college and the Canadian Football League, then used a football analogy to describe where things currently stand with the BNC.

“We’re in the Red Zone,” he stated. “We’re about to raise our hands [signaling a touchdown] on January 6, and I would not be sitting here with Congresswoman Clarke, had it not been for Charter Communications saying, ‘We believe in the Black News Channel vision.’”