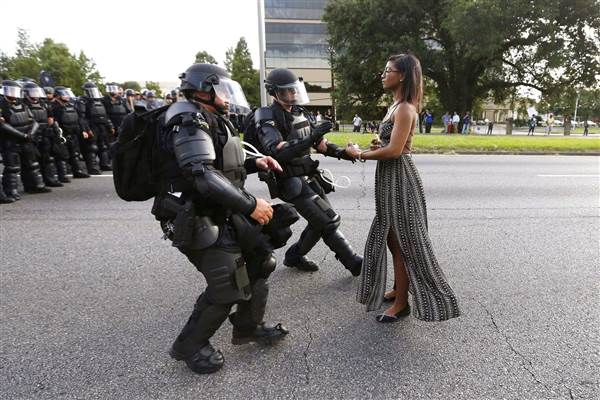 Bree Newsome snatched down a Confederate flag at the South Carolina Statehouse. Ieshia Evans calmly faced down officers in riot gear at a Baton Rouge march.

Widely published photographs of these and other black women offer some of the most arresting images to emerge from the protest movement of recent years.

“We as feminists of color … have been involved in building these movements over the decades, but we have never been acknowledged as leaders,” said Barbara Smith, co-founder of the Combahee River Collective, an early and influential black feminist group.

Unlike many of their predecessors from previous decades, this generation of black women is “demanding that they be respected. They can assert that publicly and have impact and visibility, because of all the movement work that has come before,” Smith said.

Newsome scaled a flagpole in 2015 to tear down the Confederate banner in the aftermath of the attack at a Charleston church where a white supremacist shot nine worshippers to death during a Bible study. Evans acted last summer after the police killings of two black men — Philando Castile in a suburb of St. Paul, Minnesota, and Alton Sterling in Baton Rouge. Images of both women become powerful emblems of protest and unrest.

Historically, black women have been no strangers to the quest for social change. Sojourner Truth was a leading abolitionist. Ida B. Wells led a crusade against lynching during the early 20th century. Fannie Lou Hamer demanded voting rights in the 1960s. Black women founded the Black Lives Matter movement.

But they have often been overshadowed — during the suffragette movement by white women who relegated them to the rear during marches and put their own rights first, and by the black men lionized during the civil rights movement.

“You can find that overshadowing throughout all these movements until very recently,” said Jelani Cobb, a historian and journalism professor at Columbia University. “These movements that were trying to achieve democracy were not always functioning democratically.”

COMMENTARY: The Power of the Truth

COMMENTARY: Back to School, Back to Fighting Far-Right Attacks on Education

Op-Ed: Don’t Say ‘Black’ in California, Unless You Need a Vote!