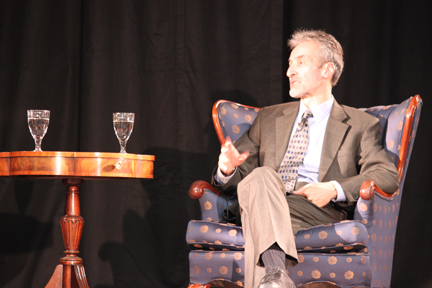 Only a small community of writers knows about the “Symposiums by the Sea” at Point Loma Nazarene University, and yet the affairs are so grandeur, it’s hard to believe such a fine occasion takes place in the heart of our own San Diego.

Director of PLNU’s journalism department, Dr. Dean Nelson is the mastermind behind bringing revered authors and writers to PLNU’s campus so that students and local writers have the opportunity to get up close and personal with them. And on Thursday, January 19th the symposium with award-winning author Samuel G. Freedman provided exactly that.
Renowned journalist and educator, Freedman has been known to write books about subject matters that would make a number of his colleagues at Columbia University uncomfortable. With titles such as Jew vs Jew: The Struggle for the Soul of American Jewry, Upon This Rock: The Miracle of the Black Church and Breaking The Line: The Season in Black College Football That Transformed the Sport and Changed the Course of Civil Rights, Freedman had made quite a stir throughout the nation. Because of the subject matter of Black football during the civil rights era, Nelson saw it fit to ensure he reached out to the appropriate communities and invite them to this particular affair. “One of my goals is to get a more diverse audience to PLNU for all the symposiums,” Nelson said, “We have another great author coming next Thursday.”
During the symposium, Nelson sat with Freedman on stage in a couple of New England; old world styled chairs and asked insider questions. “I’m thinking of a scene in Breaking the Line, where a young football player is sitting in a room…looking at himself in a mirror,” Nelson prefaced Freedman, “You described that scene as if you were there…but you’re not there. How did you do that?” Freedman explains his method of text study and in depth interviews that allowed him to go back to the days of civil uproar in America.

Freedman’s book Breaking the Line takes place in 1967 when two rival football teams Grambling College and Florida A&M set up an end of the season championship that breaks one of America’s many color barriers. Nelson’s question had more to do with highlighting the art of an author such as Freedman and his ability to re-enact scenes of non-fiction that were far from anything the writer experienced within his own lifetime. Nelson reiterated that because of stances Freedman took in the past about staying authentic and true to what he is writing, he undeniably knew Freedman wrote from a place strict authenticity. That was important especially in any case in which an other than Black individual is writing about the Black experience.
In the prologue of Breaking the Line, so many historical facts from those days uproots the most sensitive emotions from any reader especially that of the average African American. Freedman does such an excellent job of reminding us of the past, at the same time as keeping us current to how it affects us now. Freedman writes:

Despite that cynical design, these black colleges subverted the Jim Crowe regime. They served as the agency of black achievement and the epicenter of black pride, a kind of secular equivalent to the African-American church. Decades before a hip-hop entrepreneur titled a clothing line FUBU—meaning “For Us, By Us”—those words could have been the slogan for black colleges.
Freedman also makes it a point to emphasize how it took from 1954 Brown vs Board of Education to the 2007 Super bowl game to witness for the first time in history, two Black head coaches on the football field of America’s favorite pasttime game. According to Freedman and many other recorded facts, the NFL did not draft its first Black player until 1949; have a black assistant coach until 1957, appointed a black head coach until 1989. “Many Blacks who were selected by the NFL for quarterback positions would be “suspiciously” reassigned soon after he showed promise in his original position,” wrote Freedman.

During the author book signing at the end of the night, writers and students were able to have one on one conversation with the author. By the feel of Freedman’s personality, you wouldn’t guess him to be the type to write about such subject matters so far out of his realm of reality. However, the fact that he did so in such a successful manner was definitely a teachable moment for all the up and coming writers within the room.