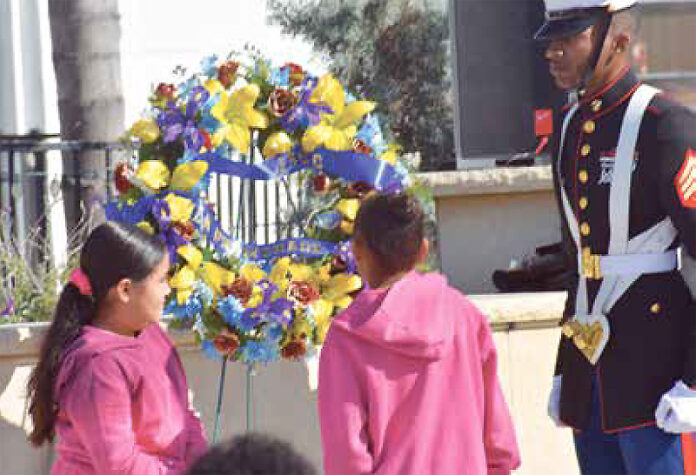 The Broadway Heights Community was out in full force on January 15th for a wreath laying at the bust of Dr. Martin Luther King, Jr. at the now famous neighborhood Promenade celebrating Dr. King’s life and legacy.

At this first Annual Wreath Laying, 4th graders Shenice Medina-Garcial and Mary Bailey placed the wreath on a stand at the top of the Dr. Martin Luther King, Jr. Way Promenade in the heart of the Broadway Heights community. The ceremony itself included the Passing of colors by the USMC Color Guard, the Pledge of Allegiance to the Flag by Lemon Grove School Students. Louise Sheffield gave Dr. King’s “I Have a Dream” speech and Rev. Eric Miller, Pastor of True Vine Missionary Baptist Church spoke on Remembering Dr. King. Closing remarks were made by Mr. Robert Robinson, President of the Broadway Heights Community Council.

In 2007, a group of residents from the Broadway Heights community went on a 16-day tour of civil rights locations across America. When they came back home, they were disappointed that they did not have a street named after Dr. King in San Diego. For the next 12 years, they worked with the City of San Diego to make it happen. Last February, San Diego City Council members voted 8-0 to rename Westin Street to Dr. Martin Luther King, Jr. Way.

But it is not just any street — the entire block was transformed into a “Smart Promenade.” The Broadway Heights Community organization has partnered with the San Diego Unified School District to have students come to the site on field trips for the rest of the month.