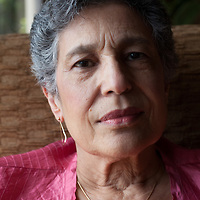 In 1957 there were two major news stories. The space race between the United States and Russia was taking flight and Americans were glued to their television sets. In fact, television was still in its infancy stages. Headlining the evening news was Sputnik, and the Little Rock Nine.

In 1954, the landmark Brown v Board of Education decision made segregation illegal across all public schools in the U.S. But in the Jim Crow South, “separate but unequal” continued. And in September of 1957, nine brave African American students entered Little Rock High School under the protection of the National Guard. Though they didn’t know it then, they were making history.

“I knew things were going to change. And I was always told that I was just as good as anyone. So when they passed around the signup sheet in my homeroom, I signed my name and didn’t think anything else of it,” remembers Dr. Carlotta Walls-LaNier, one of the Little Rock Nine.

Last Thursday evening, Dr. Walls-LaNier graced an attentive audience at the Saville Theatre on City College’s downtown campus, recounting the weeks leading up to the integration of Little Rock High School. Before enrolling in Little Rock High, she was a student at Dunbar Junior High and had a passion for learning. She spoke of the strong influence her parents and extended family instilled in her to pursue education to the highest degree. So when the opportunity arose to attend Little Rock High, she jumped at it.

Dr. Walls-LaNier described growing up in Jim Crow South, remembering being banned from public swimming pools, being relegated to the back of movie theaters, and even being only allowed to enter public zoos on a specified day of the week, “…as if the animals really paid that much attention to the color of humans’ skin,” she added guilefully.

“They had better books, better classrooms, their building was better taken care of,” Dr. Walls-LaNier remembered. “Don’t get me wrong, we had some excellent teachers [she said in reference to the colored high school, Horace Mann], but we knew their facility was better.” Little Rock High’s library was twice the size of Horace Mann’s. “Signing that paper was about having the same access as white students to being educated.”

Though over 100 students were selected, only 39 made the final cut. But on the day of destiny, only nine students arrived to walk into Little Rock High; Ernest Green [who would become the first African American graduate], Elizabeth Eckford, Jefferson Thomas, Terrence Roberts, Minnijean Brown, Gloria Ray Karlmark, Thelma Mothershead, Melba Pattillo Beals and Carlotta Walls-LaNier. Integration didn’t happen on that first day, because of the violence that broke out, and it took nearly a month before the students were able to enter into the high school and begin classes.

Governor of Arkansas Orval Fabus used the National Guard to block the nine African American students from entering the school. But, President Dwight Eisenhower saw what a disaster was taking place, so he used his own force, pulling troops from the 101st Airborne Division of the United States Army, and students entered.

“They told us we could not retaliate,” said Dr. Walls-Lanier. “Even with the protection of the National Guard, kids would find ways to provoke us.” She shared the story of one white student who would walk behind her to her first class of the day, stepping on her heels. So Dr. Walls-Lanier decided to walk very fast every day. “I was going to at least make it difficult for her. I had a different guard every week because they said I walked to fast.” But the attacks from the students were harsh, whether they were verbal or physical – and the nine could do nothing in defense.

A normal, “typical” high school experience was something of a dream for the Little Rock Nine. They were forbidden to participate in any extra-curricular activities within the school, and this included any school dances, football games, anything relating to what we would consider essential to the high school experience.

Back at home, recounting the days of growing up on an all-black street, Dr. Walls-Lanier says her friends were supportive. None questioned her motives, and all thought she was brave. But she stresses, “not all black people thought, or think, the same way.” Still, her parents were even more supportive. And even more aware of the danger she faced. “My dad would not let me drive, because there was a risk in me being run off the road by whites who were mad at the integration. It had happened to him. There were some parents whose children weren’t even a part of the integration, but they lost their jobs and were forced to travel out of town for work because the whites were mad.” White retaliation was a regular occurrence.

The years attending Little Rock High were tumultuous. Dr. Walls-LaNier said of the teachers, “some teachers welcomed us, some did not and some just taught.” Her home was bombed in 1960 in a race-related attack. So after her graduation on May 30, 1960, she “took the first thing out of Little Rock.” Dr. Walls-LaNier was the only female to participate in graduation exercises from the original nine.

She went on to attend Michigan State University for two and a half years, one of the first Big Ten schools to embody diversity. She later graduated from Colorado State College – now University of Northern Colorado. She married and had two children, as well as a very successful career as a real estate broker. It would be 30 years before the group came back together.

Since reconnecting, the Little Rock Nine have toured the country, giving presentations, appearing on television and radio shows, sharing the horrors and the triumphs of their decision to pursue education in a radical way. “My experiences serve as a means of connection and inspiration,” said Dr. Walls-LaNier.

To students of all races in 21st century America she says, “You need to know why you’re sitting in a classroom with people who don’t look like you.”

President Lyndon B. Johnson’s Commencement Address at Howard University: “To Fulfill These Rights”