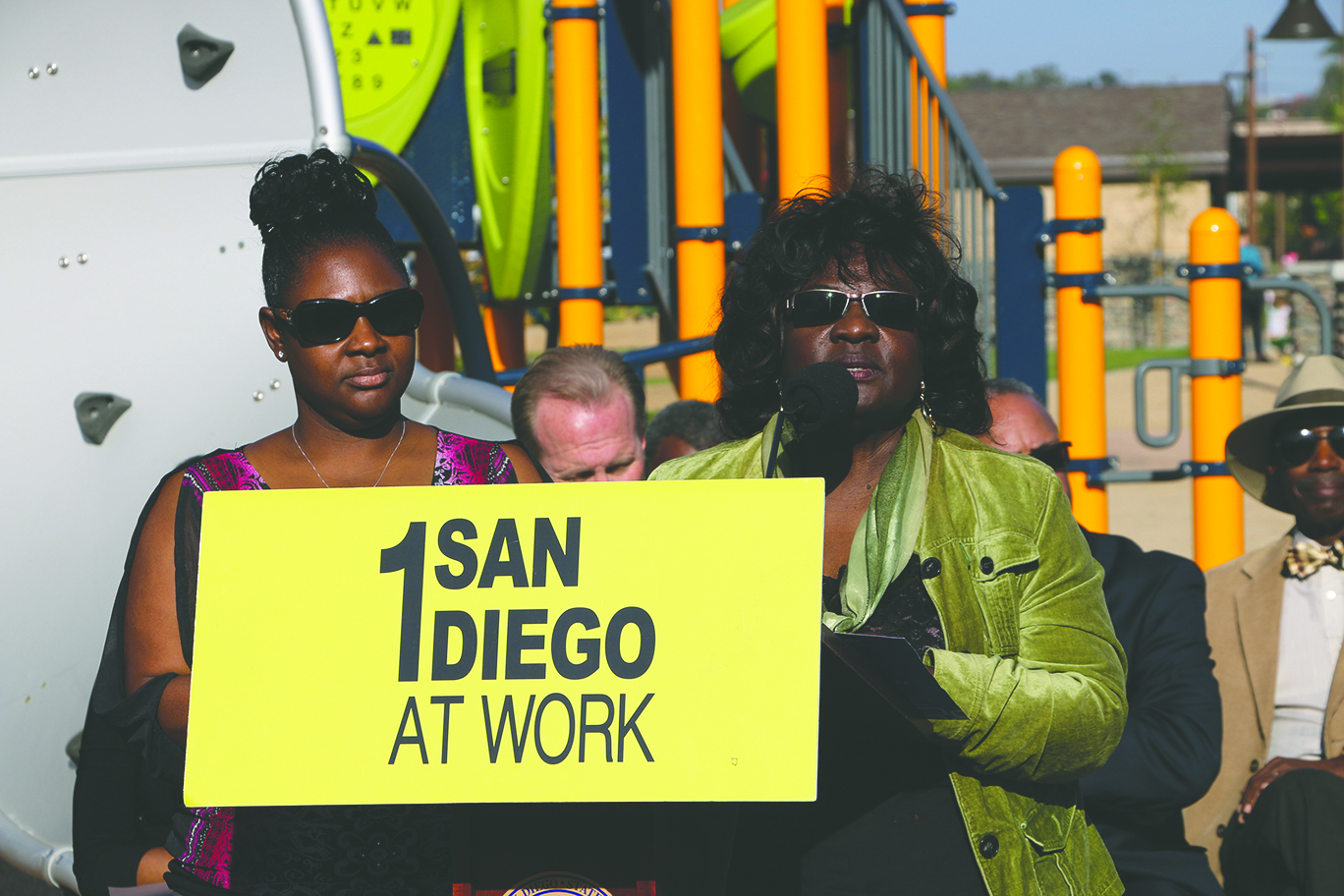 By JoAnn Fields
San Diego, CA: On Thursday, December 10, 2015 the City of San Diego Mayor Kevin Faulconer,
Councilmembers Myrtle Cole and Marti Emerald, Former Councilmembers Anthony Young and Ralph Inzunza joined the family of the late Councilmember Charles L Lewis​, his​ widow Carlette Lewis, mother Rosemary White-Pope, ​sister ​Charos Maul and nephews for the grand opening of his namesake park the Charles L. Lewis Memorial Park located on Home Avenue​ east of the I-15 freeway.
Charles L Lewis the third lived in San Diego for more than 32 years and committed to ensuring that the residents of the ​F​ourth Council District shared in the City of San Diego’s success, economic prosperity and community pride. Charles spent his childhood growing up in Skyline and Paradise Hills. He graduated from Morse High School, Class of 1984. During his senior year at San Diego State University (SDSU) Charles served as an intern for US Congressman Jim Bates. In 1990, he received his bachelors of arts degree in public administration from SDSU and earned a SDSU Extended Studies Certificate in Community and Economic Development. After serving under ​the late Councilman George Stevens for more than 10 years, Charles played a key role in a number of projects including the establishment of more than 23 neighborhood councils in the Fourth Council District.
In addition to the extensive experience in constituent work and service, Councilman L​ewi​s attributed his success from being blessed by God. Councilman Lewis s​a​t as co-chair for the City and County Reinvestment Task Force and served on the following boards and committees: Natural Resources and Culture, Public Services and Neighborhood Safety, Metropolitan Transit System, Land Use and Housing, Automated Regional Justice Information Systems (ARJIS) and the San Diego Workforce Partnership Policy Board.

In his last year​,​  he was involved in the restoration of Chollas Creek; the implementation of the San Diego Graffiti Strike Force; beautification of communities by planting trees to enhance neighborhoods in the Fourth Council District; the implementation in support of the Fourth Council District Youth Advisory Board and the creation of the Filipino American Advisory Board; quarterly Ministers Meeting and the initiation of the Business of the Month to acknowledge and thank business members of the communities in order to stimulate the job market, boost economic development and attract potential investors.Charles believed in three words of success, reputation relationships and results!   “As a public servant​,​ Charles served his community on the premise that excellence is generated through public service. Charles would be proud that ​this​ park has been created in his honor as a place where families and children can convene for the betterment of our community. This park not only enhances this​ community,​ but the entire City of San Diego,” states widow Carlette Lewis.