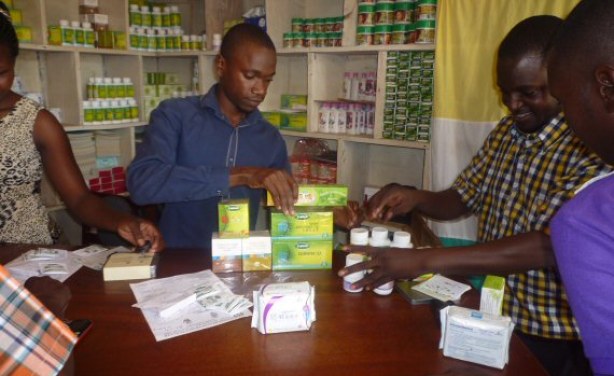 Thousands of people in Uganda have signed up to a company believing it will cure all their illnesses and help them make a fortune. It is more likely to do the opposite.

On the corner of a bumpy, red-soil road in the rural town of Iganga in eastern Uganda, there lies a small store. A handful of people mill around the entrance in the glaring sun, waiting their turn to enter. They are the main source of activity on this placid street, but their patient presence barely betrays the hubbub within.

Inside, almost a dozen people sit crammed on makeshift benches around two edges of the stifling room. Most of the remaining space is taken up by a shop counter, behind which are shelves piled high with vibrantly-coloured health products covered in Chinese characters.

A couple of customers compete with a baby wailing as they read out lists of products to the shop attendants who pick them off the shelves. Every now and then, the door in the corner opens. Someone steps out, usually holding a piece of paper, and the person sitting closest steps in.

Beyond that doorway is an even smaller room, windowless and illuminated by a single light. As I peer in, three people are undergoing diagnostic tests, a woman is standing on a machine that hums loudly as it vibrates, and a few more patients are waiting slumped along the wall.

Wasswa Zziwa Edrisa – or “Doctor Wasswa” as he is known here – stands in the centre wearing a fresh, chequered shirt on his back and an unwavering grin on his face. With the easy charm of a seasoned salesman and the swaggering self-assurance of Uganda’s national bird and symbol, the crested crane, Wasswa welcomes me in.

“I will show you how we help so many people,” he says, beaming. “Let me show you the machines.”

“This is one of the scanners,” he explains, pointing to a piece of kit that looks a bit like a 1970s radio. “It shows everything. We can see if you have diabetes, kidney deficiencies, liver problems, eye problems. Everything.”

Wasswa explains that the test works using a traditional Chinese understanding of the body whereby different points of the hand relate to different internal organs. We watch as an attendant prods a patient’s left palm with a metal tip, making a little meter light up. When the light goes green, he explains, it means that part of the body is fine, but if it goes orange it indicates a problem.

Next Wasswa points me to the corner where a woman is standing on a small machine and holding onto a pair of handlebars to which she is harnessed. Her whole body blurs in the dim light as the platform beneath her vibrates rapidly, its droning buzz filling the room.

Similar machines can be found in many gyms these days and are meant to help tone muscle, but the uses Wasswa presents are quite different.

“This is a blood circulation massager,” he announces. “You see how she sweats. It opens the vessels and deals with paralysis. It helps people with stroke.”

Wasswa then shows me another diagnostics machine, this one connected to a laptop. As the patient holds on to an appliance plugged into the computer, pictures of different organs flash up on the screen for a few seconds each as a dial next to it oscillates erratically. After a minute, a one-page document pops up, listing how well his organs are functioning.

In the airless room, Wasswa runs through a few more devices – a face pain remover, a blood pressure reducer, a necklace that removes radiation – before squeezing past bodies and chairs to get back to the first patient we met. By now his diagnostic test is complete. He tells me that he came to the store because of some mild pain around his mouth, but Wasswa breaks the news that there are more serious things about which he ought to be concerned.

“Ah, he has a problem with his spleen,” says Wasswa, nodding knowingly. “At times, he gets constipation and some swelling in the legs and arms. There is also some paralysis in the legs. He gets headaches. At times he feels dizziness. His brain arteries need to be detoxified. He has kidney deficiencies. He has bad chest pain. He has high cholesterol. He has poor circulation. And he has problems with his stomach.”

The roster of the young and healthy-looking patient’s conditions seems extreme, but Wasswa is not perturbed.

“He needs to improve his circulation by using our machines and he will need to take our products. If he uses them, he will be fine,” he reassures.

Back in the light and noise of the waiting-room-cum-pharmacy, Wasswa shows me some of these products. He picks goods off the shelves, ranging from capsules to toothpastes to body creams, and stacks them on the counter as he explains what they each do. “This takes away all the radiation in your body. This helps with diabetes. This treats ulcers. This is for slimming. This adds more white blood cells to your system. This is for people who are mentally disturbed,” he says.

“These medicines are good for everything,” he concludes finally, the pile of products on the counter now complete. “If you have cancer, we can help. If you have HIV, we can help. Even if you have a hernia or a tumour or appendicitis, you just take our products and they will disappear.”

This small store in eastern Uganda employs a handful of staff and, according to Wasswa, receives dozens of patients each day. Wasswa is also frequently heard on local radio advertising his services and has made quite a name for himself in the area. He was previously a school teacher and says his parents were “peasants”, but now, in his 30s, he is anything but. These days, Wasswa drives a shiny four-wheel drive, wears sharp suits and even goes on jet-setting trips around the world. All this makes him quite the exception in Iganga, but across Uganda, this young ‘doctor’ is by no means a solo pioneer and his store is by no means unique.

Similar stores can found all across the country, from Kasese in the west to Soroti in the east, and from Gulu in the north to Entebbe in the south. There are four such outlets in Kampala alone. These stores offer the same diagnostic tests, stock the same range of products, and above all their doors, there hangs the same innocuous green and orange sign which reads: “TIENS: Together We Share Health And Wealth.”

TIENS – also known as Tianshi – is a multinational company based 10,000 miles away in the Chinese metropolis of Tianjin. It was founded in 1995 by Li Jinyuan, who has since become a billionaire from the venture. The company has established branches in 110 countries including 16 in Africa, employs over 10,000 staff globally, and reportedly enjoys net profits worth hundreds of millions of dollars each year.

TIENS first began tapping into the Ugandan market in 2003 and it has grown steadily ever since. There are now around 30 stores across the country, TIENS distributors regularly engage in outreach programmes to rural communities, and according to the company’s national chairperson, Kibuuka Mazinga Ambrose, TIENS-Uganda has an annual turnover of around $6 million.

The company has even bought the most prominent advertising spot on the Health Ministry’s official calendar, a particularly brazen move given that none of its outlets are registered health facilities.

EXPLAINER: Is Griner’s Guilty Plea a Step Toward Freedom?

WNBA’s Griner Pleads Guilty at Her Drug Trial in Russia