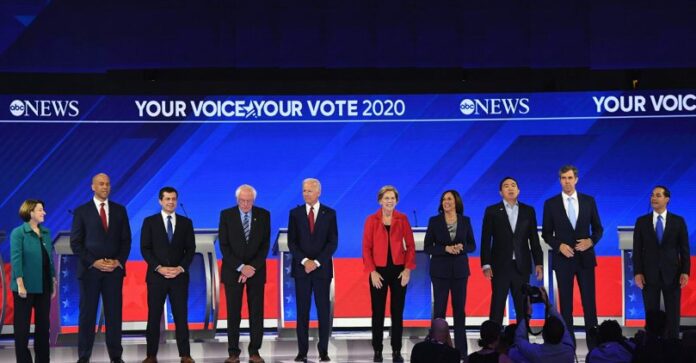 An analysis by USA Today’s Aamer Madhani noted that, with 12 candidates vying for voters’ attention at the debate, “the White House contenders threw sharper jabs at each other and competed to outdo each other in their expressions of outrage over President Donald Trump.”

The symbiotic nature of debates and public opinion polls was on full display this week in Ohio, stated Krista Jenkins, a political science professor at Farleigh Dickinson University and the school’s poll director.

“[Former Vice President Joe] Biden stood for incrementalism, and those who flanked him – Sens. Elizabeth Warren and Bernie Sanders – pushed hard for a vision that’s anything but incremental,” Jenkins said in a recap of the debate for Advance Local Media in New Jersey.

Nowhere was this more evident in the debate over health care, Jenkins noted.

Booker drew a contrast with his opponents and President Trump, saying he was “having deja vu all over again” after early questions in the debate about Trump’s attacks on Joe Biden and his son Hunter’s work in Ukraine.

“I saw this play in 2016’s election. We are literally using Donald Trump’s lies. And the second issue we cover on this stage is elevating a lie and attacking a statesman. That was so offensive,” Booker said during the debate.

“We should not have to defend ourselves. And the only person sitting at home that was enjoying that was Donald Trump seeing that we’re distracting from his malfeasance and selling out of his office.”

And Sands noted that Booker used his time to walk through his own priorities, from addressing childhood poverty to gun licensing.

Booker’s campaign manager, Addisu Demissie, said in a statement Tuesday night that Booker “won the night by standing out as a leader, a unifier, and the adult in the room” who had “refocused the conversation on the issues that matter most”

Demissie said Booker was a “breath of fresh air” on the stage, “particularly by coming to Vice President Biden’s defense against Trump’s lies and highlighting issues that aren’t getting enough attention in this presidential campaign, like women’s reproductive health care, strengthening unions, and ending child poverty.”

“For yet another debate, Cory showed a national audience that he can unite our country and make real change for Americans who face injustice and seek opportunity,” Demissie said.

An analysis by USA Today’s Aamer Madhani noted that, with 12 candidates vying for voters’ attention at the debate, “the White House contenders threw sharper jabs at each other and competed to outdo each other in their expressions of outrage over President Donald Trump.”

Sanders returned to the debate stage two weeks after suffering a heart attack and resumed his call for a “political revolution.” Billionaire activist Tom Steyer made his stage debut but struggled to get much speaking time.

The network noted that Buttigieg, the South Bend mayor, had one clear goal in the debate: Hit Elizabeth Warren on her support for “Medicare for All,” and make sure Democratic voters knew he had an alternate plan that would not eliminate the private health insurance market. “Mission accomplished,” the analysts said.

On Yang, a CNN analyst said, “If I told you even three months ago that there would be a time in mid-October in which there was an extended conversation in a Democratic debate about the dangers of automation, you would have laughed at me.”

On Tuesday, the network’s analysts highlighted the fact that it formed the basis of a head-to-head between Warren and Harris.

“I just wanted to say that I was surprised to hear that you did not agree with me on this subject of what should be the rules around corporate responsibility for these Big Tech companies, when I called on Twitter to suspend Donald Trump’s account, that you did not agree,” Harris said. “I would urge you to join me.”

But Warren did not seem interested in discussing the matter.

“Look, I don’t just want to push Donald Trump off Twitter. I want to push him out of the White House. That’s our job,” Warren said.

“So, join me. Join me in saying that his Twitter account should be shut down,” Harris responded.

To that, Warren responded: “No.”

Warren then pivoted to “why it is that we have had laws on the books for antitrust for over a century and yet for decades now we’ve all called out how the big drug companies are calling the shots in Washington.”