Home Editorial and Commentary COMMENTARY: ‘Somebody taught you to hate me’ 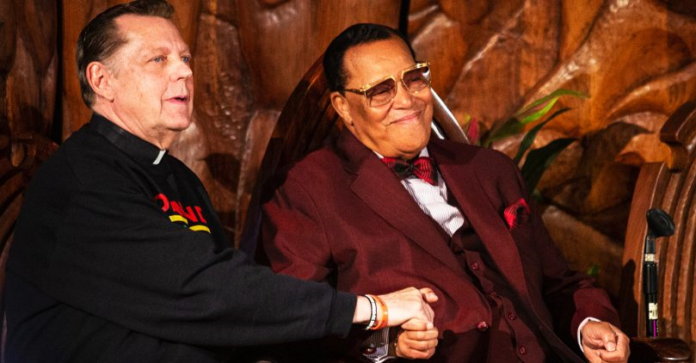 CHICAGO — A rousing crowd in a packed St. Sabina Catholic church greeted the Honorable Minister Louis Farrakhan and church pastor Fr. Michael Pfleger as they walked arm-in-arm into the sanctuary during an event held for the Minister to respond to being banned from Facebook and Instgram.

The media giant cancelled the Minister’s account and those of others they described as “dangerous” individuals who deliver “hate speech” in violation of the platform’s policies.

Fr. Pfleger, a White Catholic priest, offered the Minister his church May 9 to respond to the ban, setting himself up for days of condemnation, personal threats and hateful speech as a result.

The 86-year-old Minister said his critique of Jewish actions—specifically his public exposure of writings in the Jewish Babylonian Talmud that declares that Jesus is in hell boiling in excrement and describes Mother Mary as a prostitute – has fueled the anger of powerful members of the Jewish community.

“The enemy is so hateful of me,” he said. “You make me the litmus test for any Black person who wants to rise in America.”

As an example, the Minister said Barack Obama would never have been elected president if a photo of him and the former Illinois senator had been released to the public.

“Poor Barack. We (Nation of Islam) helped him to win in Illinois,” he said. “I’m a hated man today, you can’t even have a picture with me. That kind of hatred is insanity.”

Reaction to the Facebook ban was swift as Blacks and others who support the beloved Minister flooded the platform with his picture and his words. The audience was asked to stream the event on Facebook Live during the event.

With the image of a Black Jesus painted in the church looking down upon him, the Minister said when Jesus walked the earth he was hated without a cause. What have I done that you hate me like that, he asked?

The answer, perhaps, is rooted in his stance in defense of Rev. Jesse L. Jackson during his run for president in 1983. During that time, members of the Jewish community held demonstrations outside Rev. Jackson’s campaign events chanting “Ruin, Jesse, Ruin” and sending death threats to the prominent leader.

Min. Farrakhan advised Jewish leaders to sit down with Rev. Jackson to discuss differences, adding, “If you harm this brother, I warn you in the name of Allah, this will be the last one that you harm.”

From that time to the present, media and Jewish leadership have dogged Min. Farrakhan with the label of “anti-Semite” and continue to pressure prominent officials from associating with him.

In 1985 a Black Chicago bank was pressured to refuse deposit of a $5 million loan to Min. Farrakhan and the Nation of Islam from Libyan leader Muammar Gadhafi for economic development.

In 1993, Jewish leaders pressured Black leaders to disinvite Min. Farrakhan from speaking at the 30th Anniversary of the assassination of Dr. Martin Luther King, Jr.  In 1995, some of those same Black leaders spoke at the Million Man March.

In 1994, after Nation of Islam male members known as the “Dopebusters” disarmed a drug dealer and cleaned up several Washington, D.C., projects, Jewish influence caused the government to cancel a contract with a security firm established by members of the Nation of Islam.

“Some of us could not come out tonight because they did not wish to be censured by those who presently have power to censure,” the Minister said. “But that power is gradually being taken from you, and I am so grateful to God that He made me an instrument to bring that end to your wicked system of injustice.”

Min. Farrakhan explained that after the prophets died, Satan entered their communities and divided the followers. God’s coming is after the workings of Satan and many of us don’t know that we’re followers of Satan thinking we’re following Jesus Christ, he said.

“You can have a church on every corner, but don’t fight Satan. Satan has won against all the prophets of God,” he said to clergy. “Discipleship will cost. Are you really willing to pay the price?”

A Facebook statement said the process “for evaluating potential violators” of Facebook policies “is extensive and it is what led us to our decision” to ban Min. Farrakhan. A spokesperson told CNN such factors include “whether the person or organization has ever called for violence against individuals based on race, ethnicity, or national origin; whether the person has been identified with a hateful ideology; whether they use hate speech or slurs” in their social media profiles.

“I am really dangerous,” Min. Farrakhan said to a standing ovation. “I’m not dangerous on my own. God, the Lord of the Worlds, made me dangerous to Satan and his world.

“That day, what day? Judgement cannot come unless there is a falling away first and the man of sin be revealed, the son of perdition,” he continued.

In opening remarks, Student Min. Ishmael Muhammad said Fr. Pfleger has always answered the call of justice and been on the right side of history.

Knowing that his brother is innocent of those charges, Fr. Pfleger saw this as another effort to silence those who would dare speak truth to power, Min. Ishmael Muhammad said. Even though Fr. Pfleger is now being attacked, we remind him that no weapon formed against the righteous will prosper in the time of God, he said. 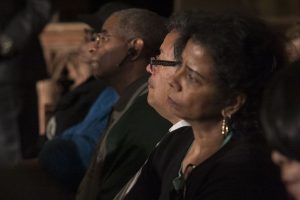 Referring to the cell phone as the modern day “picket sign,” Min. Ishmael encouraged the audience to text “#wearefarrakhan” to 990-00 to register support for Min. Farrakhan and to be kept updated on the campaign.

Min. Farrakhan teaches us to pool our resources in a collective manner and to do something for ourselves, the student minister said. He leads us to establish an independent school system and make our communities a decent and safe place to live, he said.

Farrakhan did not neglect the people of Flint; Farrakhan did not lie to the American people about weapons of mass destruction that caused thousands of lives to be lost on the battlefield, Min. Ishmael Muhammad charged.

“By calling the Minister dangerous you want him to be hated by those who love, respect and admire him. And for us to distance ourselves from him. For which one of his works do you stone him,” he asked?

“The truth of the matter is, you are the real clear and present danger to the suffering masses. You lie, you steal and you murder the innocent,” Min. Ishmael Muhammad said. “You charge the innocent with what you really are.

“We are here tonight because we have benefitted from his teachings and the example of righteous character. We love Min. Farrakhan and we will not let you tell us who we should listen to. Your day of being ‘Massa’ is over!”

This is the same Facebook that has been live streaming shootings, attempted rapes, White supremacists, racial name calling and countless other racist and dangerous acts, Fr. Pfleger told the audience.

“It is dangerous to me when we begin to stop free speech and seek to silence prophetic voices. There are many who say they do not like Min. Farrakhan because all they have heard is various sound bites. Perhaps that is why Facebook wanted to ban him, to keep people from hearing his entire message and the truth that he seeks to teach us,” the Catholic priest explained.

Citing the work of cleaning up Black men and saving lives, Fr. Pfleger added: “Min. Farrakhan has been a bold voice against injustice done against Black people in this country and his voice deserves and needs to be heard.”

Fr. Pfleger said he has been cursed at, received hateful Facebook postings, had to cancel a fundraiser, had financial support withdrawn, called an “n-lover” and a traitor to White people since inviting Min. Farrakhan.

He said St. Sabina historically has invited imams, rabbis, prophetic preachers, civil rights leaders, and icons to speak and “live the faith we say we profess.”

“It is interesting to me that those who accuse (Min. Farrakhan) of hate have been so hateful this past week. Oh, the hypocrisy,” he said. 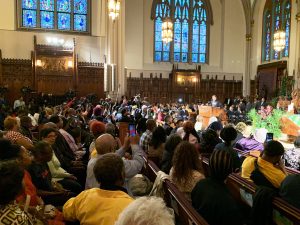 Sitting on a step outside the church waiting for the line to diminish, Suave Griffin, 17, said he came to hear the message because Min. Farrakhan has been “like a wise grandfather and teacher” to him.

“I have been waiting for him (Farrakhan) to disappoint me a little but he still hasn’t said anything to let me down. If you can go 86 years of life without being fake says a lot about him. I can listen to him for two hours and say ‘wow’.  It’s like music. I can’t sit that long and listen to my mom without dozing,” the high school student said with a laugh.

Aliyah Redmon, 22, said she disagrees with the ban. “Black people are the strongest and most resilient people on earth. Why is our unity such a threat? Anyone preaching unity and love and taking a radical stance against oppression is bound to be silenced.

“Everything I have heard from Farrakhan has been truth backed up by facts. Nothing he says has been biased. He is strong with his words and he knows what needs to be done as far as us being unified,” she said.

Lamar Johnson, 29, directs the Violence Prevention program at St. Sabina Church. He said no other Black leader has done to reform Black men over the last 60 years than Min. Farrakhan. Banning the Minister shows the hypocrisy of White privilege, he said.

“To say that what the Minister has said is hate speech when no other demographic of people in America has experienced hate more than Black people. A statement on social media is never equated to the systemic and literal oppression Blacks have experienced for centuries. We have been at the front end of receiving hate. I love the Minister and the things he’s been doing,” he said.

“This is much ado about nothing. Those of us who have been in the presence of Bro. Farrakhan for now 40 years, we’ve seen this movie before. In the ‘90s when they were repudiating him, Black United Communities put him in our Hall of Fame,” said longtime activist Eddie Read.

Min. Farrakhan is a truth teller, he said noting the absence of established Black leadership that normally draw media attention. They’ll come running to the Minister when they need his aide, but they won’t stand with him in the time of challenge when others are beating on him, he said. I say that Fr. Pfleger is a Black man trapped in a White man’s body, he commented.

“I came to support a man I know that has benefited our community. He’s the one who shows us our value and uplifted many of our brothers broken down by the injustice of the criminal justice system,” said State Senator Jacqueline Collins (D-16), a member of St. Sabina. “He knows his people; he loves his people. I came to shine the light of love back on him.”

“Hands off Farrakhan,” added activist Zakiyyah Muhammad. “Anybody who comes after Min. Farrakhan is an enemy of mine. He’s been a leader, teacher and healer to millions of people. The enemy hates him because he’s revealing their hatred for Black people.”