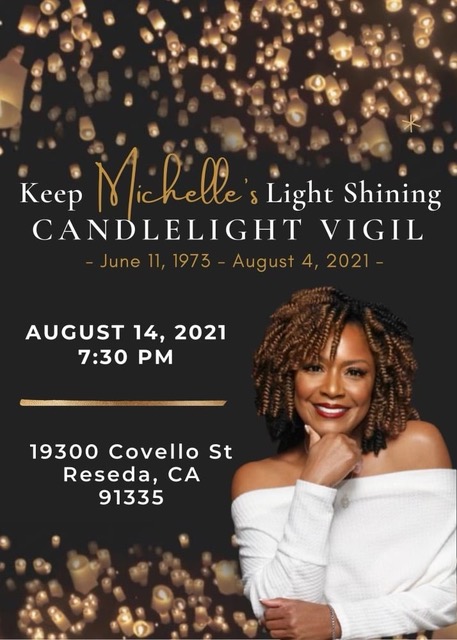 Hundreds gathered online and in person at Faithful Central Bible Church in Los Angeles for the home-going celebration of Michelle A. Avan on Aug. 27.

The 48-year-old senior banking executive was found beaten to death in her Reseda home on Aug. 5.

Viewers of the livestream expressed prayers and condolences, and especially shared how beautiful the celebration of her life was.  Their sentiments reflected the beauty and solemnity of the invocation, songs by an all-female youth ensemble, and a video presentation of the beloved mother, daughter, sister and friend in her personal and professional life experiences.

Avan’s son Trevon Avan and daughter Nyah Avan shared some of their endearing and humorous moments with her.  They were best friends, more like sisters, said her daughter, as she took deep breaths.  She loved to dress up in her mom’s clothing, and grew to love to pick out Avan’s attire, especially for award ceremonies and galas.

“I know her spirit will still continue to help me through my own award ceremonies, because she’ll give my aunties, my uncles, my cousins, my grandparents, my dad, her sister-friends, her village, the strength to help carry me and my brother on during these difficult times,” said her daughter, brimming with pride.

Andy Sieg, president, Merrill Lynch Wealth Management, reflected on the woman who had a remarkable impact on the company for over 23 years.

She landed her dream job and took charge of the hiring, development and advancement of women, people of color, and others with differences, when she was made head of Women’s and Underrepresented Talent Strategy for Bank of America last June, he reflected.

“That is a huge impact.  It’s across a company of 200,000 people,” said Sieg.  As teammate Susan Axelrod expressed, Avan’s unique gift was the ability to bring people together in very special ways, to lift up those left behind, to encourage others to extend a helping hand … Far beyond their mission of driving adversity, she stood for unity, empathy, acceptance,” he continued.

Meanwhile, police arrested 52-year-old Anthony Turner, her ex-boyfriend, alleging he entered her home on August 3, killed her, then left the next day. Bail was set at $2 million.

Turner faces one felony count each of murder and first-degree residential burglary, and has pleaded not-guilty.  He has been released on bail and a preliminary hearing has been reportedly scheduled for Sept. 30.

Family members, friends, concerned community members and colleagues of Black women and girls plagued by and ultimately killed in domestic or intimate partner violence bemoan the question over and over again, “Why did she stay?”.

Jenesse Center, Inc., in its 40-year history of meeting the needs of intimate partner survivors has learned that the answers are more nuanced, complex, and many, such as:
“I had nowhere else to go.”
“I felt ashamed.”
“I couldn’t call the police.”

Our Black girls and women face the added burden of structural racism.  Negative interactions between law enforcement and Black girls and women are rooted in the institution of slavery and have become institutionalized responses in the decades since. Far too often we are seen as “less than human” and as such, are not given the respect and grace to be in crisis and needing help; to be a victim, and not perpetrator of violence. If the police are called, far too many Black girls and women have themselves been arrested and persecuted as the “aggressor.”

In other cases, Black girls and women have been killed by police responding to their calls for help. On average, it is expected that between 2.4 and 5.4 Black girls and women per 100,000 will be killed by police over the course of their lifetime.  Black women are 1.4 times more likely to be killed by the police than white women. They also fear not being believed and that if the police respond and do nothing, they and their children are at greater risk of increased acts of violence by their partner once the police leave.

But also, Black women are conflicted by the thought of turning their children’s father over to the state, compounding years of social injustice in the criminal justice system. However, they also face further isolation, shame, and ridicule by family and friends for calling -9-1-1 even when their very lives are at-risk.

Collectively, what is our community responsibility to safety and protection of Black girls and women in Los Angeles County?  How do we take a stand to protect our mothers and daughters? How do we amplify our voices to say, “enough is enough”?

The Jenesse Center, a domestic violence intervention organization based here in Los Angeles, calls upon elected officials, public policy makers, employers, and community and spiritual leaders to join us in solidarity toward action. The interventions and preventative support services we provide to victims and survivors of domestic are holistic, trauma-informed and culturally responsive.

We need informed advocates who relentlessly amplify the message that Black girl’s and women’s lives have value and drive action to ending intimate partner violence in our homes. Jenesse is ready to change the world by changing hearts and minds right here in our community.

Are you ready to join us?

About the Author
Karen Earl is CEO of the Jenesse Center, a Los Angeles-based non-profit organization that provides domestic violence intervention and prevention support programs.