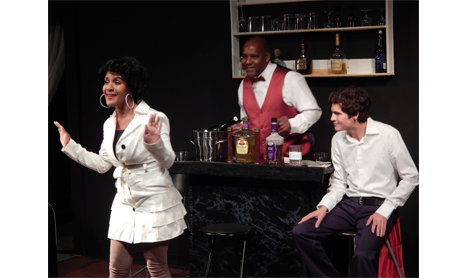 To kick off Black History Month, Community Actors Theatre (CAT) bestows upon the masses a head-bobbing, toe-tapping, finger-popping musical that is not only entertaining, but bursting with historical facts about many well-known music artists who pioneered present day’s R&B, jazz and blues, even pop and rock & roll.

Bojo’s Place takes place in a nightclub by the same name owned by none other than Bojo himself, played by actor Carl Johnson. Throughout the night at Bojo’s, there are guest appearances by Ella Fitzgerald — played by Sheashonna Christopher, Lena Horne — played by Kimberly Sellers, Luther Vandross — played by Willie Lang Jr., James Brown — played by Robert A. Moore, Chaka Khan — played by Cynthia Rogers, and Big Daddy/BB King — played by comedian Amir Rahim a.k.a. Extreme Rahim. All the while backup singers/dancers Robert Urista, Richard Caja, Damarah Bryant and choreographer Patty Fay, also doubled as narrators as they took turns expertly educating the audience on each artists’ background.

Each actor put on a phenomenal performance and truly lived up to the characters that they portrayed, embodying the artists’ personalities and voices to a tee, including when Moore breaks down to his knees on his rendition of the late James Brown’s “I Feel Good” and Caja covers Moore’s shoulders with a cape. Anyone who’s ever seen a James Brown performance, whether live or via YouTube knows that that was a signature move of his; then he would explosively knock the cape to the ground and continue singing, which Moore did as well. And the other cast members were definitely memorable with their equally extraordinary vocals and dance moves that made the audience want to jump out of their seats to join the fun.

Bojo’s Place is not the typical musical with sing-songy story lines reminiscent of a Disney movie. It’s an educational journey through where the music that we know and love today has evolved from. This is a show that is not to be missed!

CAT will be running Bojo’s Place until February 23. Visit www.communityactorstheatre.com or call 619-264-3391 for more information about exact show times, as well as future shows.