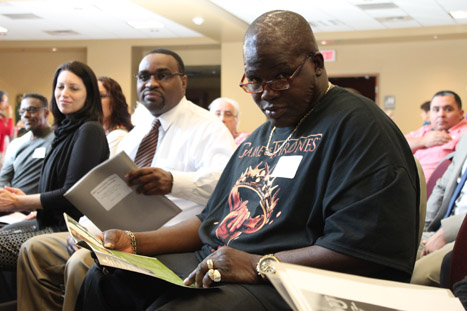 Jacobs Center—Saturday, February 21. Opening remarks by District Attorney Bonnie Dumanis set the tone for an event that appeared to be much needed by a community stricken by gang violence and homicides.
For all intended purposes by those who put together the summit, all bases seemed to be covered. They had three sessions entitled Know Your Rights, Trauma Informed School and Communities and Promising Practices For School and Community using former Gang Members.
Know Your Rights was facilitated by NAACP President Lei-Chala Wilson and southeast division Captain Tony McElroy. Three youth from the Alliance for Community Empowerment (ACE) sat in this session for the first 9:30 round. McElroy and Wilson did a great job tag teaming and letting the youth know questions to ask in the event they are stopped by law enforcement. The youth had the opportunity to attend the two other sessions at 10:15 and 11:00. However, youth Yasin said he learned the most from the first one. “I like knowing what to do if the police stop you,” he said with a hardened look on his face. “If he doesn’t tell me I’m under arrest, I can leave.” Yasin said he also enjoyed “the session with the bangers”. He adamantly declared that he now knows why he is going to stay away from the gangs in his neighborhood of City Heights.
Yasin and two other youth from the ACE program seemed to be the only youth attending the event, besides the handful that were part of Reginald Washington’s Project AWARE. The absence of surrounding community youth, adults and known fourth district leaders, was the first sign that there was a lack of community awareness about the summit.
In addition, there was a moment where one community member was able to confront one of the diversion program leaders during one of sessions. The program leader asked why parents weren’t willing to come to her diversion sessions. One gentleman replied that trust was an issue​​, others gave their reasons it could be and one community member that dealt with the leader in the past, spoke out sincerely as to why she didn’t want to attend. “I met you the night my son was caught up in a curfew sweep,” she said, “and that night you weren’t trying to hear me and so we don’t trust you!” The leader wanted to reply, but it was time to go to the next session, so their conversation had to continue outside of the room.
Community organization 100 STRONG was one of the leaders within ​the ​fourth district that was not in attendance that day. Founder Mario Lewis said, “I didn’t find out about it until the day of. By that point I couldn’t rearrange my schedule.” Lewis went on to say he was quite disappointed that he wasn’t made aware of the summit. “You see these organizations and people coming into the community without figuring out who is already trying to do something about the violence within the community,” Mario quipped, “And when people don’t do their homework, they end up wasting the community’s time and resources. Our community is always getting poverty pimped. Somebody came in and threw this thing together with grant money and did a half [blank] job at community outreach!” Lewis said he had it on his list to start investigating some of the so-called diversion programs within the neighborhood. Lewis said it was time to start making the organizations receiving funds, accountable to the community at large.
After the breakout sessions, lunch was served and the keynote speaker Julio Marcial, Program Director for The California Wellness Foundation was introduced by Councilwoman Marti Emerald.
Marcial kept things real as he talked about the discounted neighborhood he grew up in and spoke about homicides in such a detailed way a saddened dose of reality began to permeate the entire room. Marcial spoke about the one healthy adult that connected with him as a youth. “I had a mentor that created a safe place,” He reminisced, “[Often] we are looking for new technologies and innovations…let me remind you there is nothing new about what we do.” The audience cheered in agreement.
Marcial continued to say things that many of the organizers of this event could have learned a hard lesson from. “What I am impressed about today is the number of young people that are here,” said Marcial, “because in some way we talk about wanting to help them find that path way, but we never ask them what we can do with them.” According to Marcial, this leads to an “us versus them mentality” and that mentality was evident by some of the “programs” present that day.
As Marcial made his closing comments, audience members gave him a standing ovation. But many were still left wondering if his message had been really heard at all.