A focus on overdose awareness is a crucial element in bringing light to an alarming rise in opioid addiction occurring across the country, and here in San Diego County.

SAN DIEGO AND THE OPIOID CRISIS
In 2019, there were 151 recorded deaths attributed to drug overdoses in San Diego. Comparatively, in 2020, there were 457 fentanyl-related overdose deaths. That’s a giant 202 percent increase in just one year. The Black/African American community made up 23 percent of those deaths, second only to Native American/Alaska Natives, who made up 34 percent. 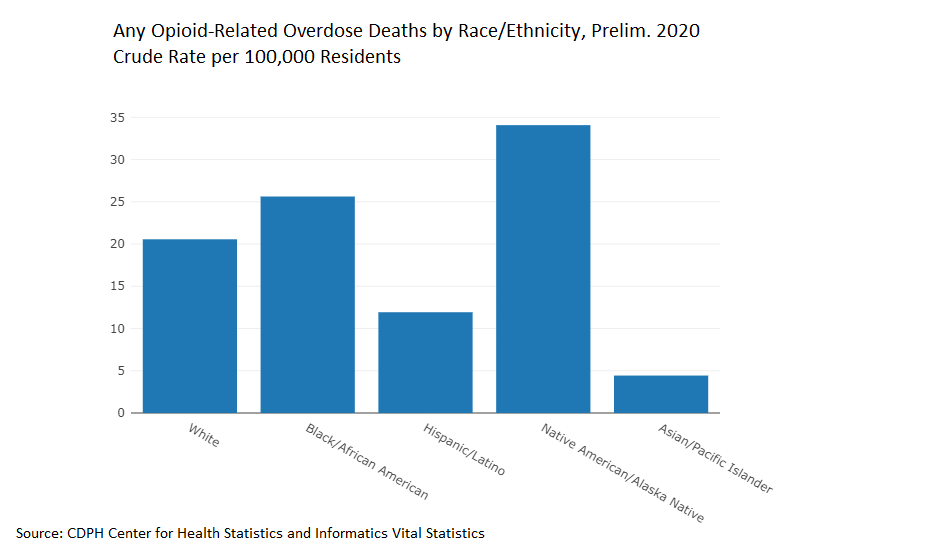 Tara Stamos-Buesig, founder and executive director of the Harm Reduction Coalition of San Diego, says that the COVID-19 Pandemic has created a perfect storm for drug users, who tend to use more when they are isolated, under stress, or afraid of outside stigma. But what’s truly killing people, in numbers that have never been seen before, is one thing: fentanyl.

According to the County News Center, San Diego’s opioid crisis has mainly involved prescription opioids, but synthetic opioids such as fentanyl are now extremely prevalent, with an 82 percent increase in deaths involving fentanyl. The National Institute on Drug Abuse (NIDA) defines fentanyl as a powerful synthetic opioid that is similar to morphine, but 50 to 100 times more potent.

It can be found in prescription form and given legally to patients in extreme pain, such as after certain types of surgeries. Fentanyl can also be made and used illegally. It is now being found more and more in drugs such as cocaine, heroin, methamphetamine, and MDMA, as it is a cheap and effective additive. Because of the potency of fentanyl, it is extremely easy for users to become addicted to the drug.

“Our drug supply is poisoned and that’s not going to go anywhere any time soon,” says Stamos-Buesig. “It’s not like when I was a kid, we could party and hang out and try some stuff but we wouldn’t die. We might get sick, we might throw up but we didn’t die. Today people are dying. We can’t just babysit someone better or leave them alone; it doesn’t matter, with a fentanyl overdose they are going to die.”

WHAT YOU CAN DO
While in an ideal world, there would be no drug addiction or overdoses, the reality is far different. We as San Diegans must accept that there will always be drug use and there will always be those that suffer from the illness of drug addiction. Punishment and draconian stigmas have not and will never work, but compassion, preparedness, and empathy will.

Gretchen Burns Bergman, Co-Founder and Executive Director of A New PATH, has high hopes for the future of San Diego. She praised our local leaders and our Health and Human Services for advocating for the adoption of harm reduction services. “Nathan Fletcher is helping push that agenda. I think San Diego typically is very conservative. I’ve been doing this work for 22 years and I know that we could have probably gotten a lot more accomplished in that time but I would say that now, things are really open. I want to support those people that our helping to open that up. Things happen way slower than I would like to see but I have to applaud when I do see positive change.”

“We are a little bit behind the jurisdictions in other counties—LA and San Francisco, when you think about what they’re really doing out there. So this is my call to action to ask everybody to get trained with Narcan,” added Ella. “I don’t care if you think you’ll never need it—it is better to have and not need than to need and not have. Not one more, no more overdoses.”

HOW TO USE NARCAN AND WHERE TO FIND IT
Narcan is easy to use and extremely effective at preventing deaths from opiate overdoses. Instructions for use:

In May 2021, the County News Center reported that nasal Naloxone would begin to be offered to the general public at several community-based locations and clinics throughout the region at no cost. Until the program is put in place, people who would like to be trained and given free Narcan can contact April Ella at A New PATH: 619-670-1184 or april@anewpath.org