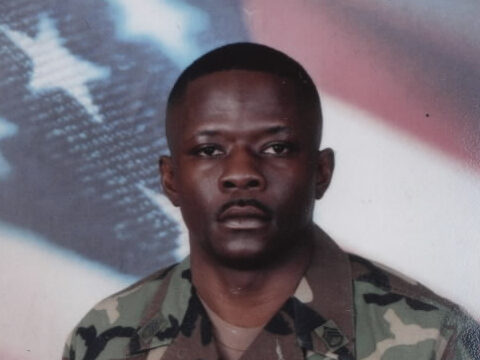 Edited by Daniel Kucin Jr. and David Matthew | Zenger News
ST. AUGUSTINE, Fla. — After a 15-year effort by his family and members of Congress, the U.S. Senate on Tuesday passed a bill authorizing a posthumous Medal of Honor for U.S. Army Sgt. First Class Alwyn Cashe.
Introduced by U.S. Reps. Stephanie Murphy (D-Fla.), Dan Crenshaw (R-Texas) and Michael Waltz (R-Fla.), the bill waives a federal law that requires a Medal of Honor be awarded within five years of the actions that prompted it.

The House of Representatives passed it on Sept. 22, but its momentum slowed while Senate Republicans were focused on Supreme Court Justice Amy Coney Barrett’s confirmation process. The bill will go to the White House to be signed into law. It permits the Department of Defense to waive the five-year rule for Cashe.

Cashe died on Nov. 8, 2005, from injuries he sustained while rescuing his fellow soldiers from a vehicle destroyed by an Improvised Explosive Device in Iraq.

“I am so grateful the Senate passed our bill to pave the way for the President to award Alwyn Cashe the Medal of Honor,” said Murphy, who represents the Sanford, Fla., and Oviedo Fla., communities where Cashe was born and raised.

“We are now very close to recognizing this unbelievably heroic soldier, who died saving his men, with our nation’s highest award for combat valor, which he earned beyond a shadow of a doubt.”

Murphy’s co-sponsors were effusive after the bill cleared the Senate on the eve of Veterans Day.

“We are one step closer to properly recognizing Sergeant First Class Alwyn Cashe for his bravery in risking his own life to save his fellow soldiers,” said Crenshaw, a former Navy SEAL. “He is deserving of the Medal of Honor, our nation’s highest military award for bravery on the battlefield, and we urge President [Donald] Trump to quickly sign our bill into law to make sure that happens.”

“It’s not every day you read an extraordinary story like Alwyn Cashe’s,” Waltz, a former Army Special Forces officer, said. “His bravery in the face of danger has inspired so many already, and this is a significant step forward to properly recognize him for his heroism.”

Cashe will be the 91st African American serviceman to receive the Medal of honor.

The Long, Hard Road to Now

Cashe was born on July 13, 1970, the youngest of a blended family of 18 children. He is remembered by his sister as a “rambunctious, spoiled, somewhat bad kid” with a passion for the outdoors.

“He was very outdoorsy,” said Kasinal Cashe White, 62, a registered nurse in Tallahassee, Fla. “His favorite times were when he had a gun on his hip or a fishing pole in his hands.”

After graduating from Oviedo High in 1988, Cashe enlisted in the U.S. Army, where, as an infantryman, he served tours of duty in the 1991 Gulf War and during the 2003 invasion of Iraq.

On Oct. 17, 2005, acting as a platoon sergeant for 1st Platoon, Alpha Company, Cashe, and his troops embarked on a mission to clear a route in the city of Daliaya.

According to Military Times reports, Cashe was in the lead Bradley Fighting Vehicle when it struck an Improvised Explosive Device, rupturing the vehicle’s fuel cell, covering him in fuel, and causing the Bradley to engulf into flames.

While ablaze and under heavy gunfire from insurgents, Cashe rescued six soldiers from the burning vehicle, returning multiple times and refusing medical assistance until everyone was pulled from the burning wreckage.

At the end of the skirmish, an interpreter was killed in action, with 10 soldiers wounded, seven severely.

Cashe was flown to a medical facility in Germany after having 72% of his body severely burned before being transported to Brooke Army Medical Center at Fort Sam Houston, Texas, where he ultimately succumbed to his wounds.

When the news of her brother’s incident first came to light, White thought little of it.

“I was told that Al had been hurt,” she said. “My sister, Bernadine, told me he’d been in an accident, so I thought maybe he broke his leg.”

During her commute from her then-Lake Butler, Fla., home to Gainesville, Fla., where she was working as an intensive care nurse, she received another call: the description of his condition was downgraded from “hurt” to “wounded.”

“Now, you’ve got my full attention,” she said. “I was routed to the doctor in Iraq that told me Al had been burned and was in critical condition. That’s not a term that’s used loosely. All I could think was, ‘please don’t let my brother die. Send him home to me.’”

The fog of war made initial reports of the action sketchy. Unaware of how badly wounded Cashe was and the extent of his heroism, mainly performing a rescue while taking on enemy gunfire, his battalion commander at the time, now-Lt. Gen. Gary Brito, nominated Cashe for the Silver Star.

Along with a Purple Heart, that award was presented to Cashe’s mother outside his hospital room, where he lay fatally wounded.

Meanwhile, the hospital staff provided Cashe’s sister with more details of his actions on that fateful day in Daliaya.

“They were telling me that my brother was a hero, but, in the U.S., that’s a word we throw around a lot,” said White. “But, I did my research and concluded that my brother deserved a Medal of Honor.”

After getting the “run-around” from former Sen. Bill Nelson and former Florida Gov. Jeb Bush, who both claimed they could not aid in her efforts to upgrade Cashe’s Silver Star to a Medal of Honor, Rep. Murphy took up the mantle.

“She called me and said, ‘Ms. White, I’ve been reading your brother’s story, and I can’t believe a Florida citizen did this, and there’s not a building named after him. I will support you,’” said White.

On July 14, 2014, a new Army Reserve Center in Sanford, Florida got Cashe’s name. The Oviedo, Florida post office was renamed in his honor in May 2019.

Buoyed by additional statements provided to the Army by Brito to justify upgrading Cashe’s award to a Silver Star, Murphy, Waltz, and Crenshaw reached out to Secretary of Defense Mark Esper last fall to formally request the upgrade.

“After giving the nomination careful consideration, I agree that SFC Cashe’s actions merit award of the Medal of Honor,” Esper responded in a letter to Waltz on Aug. 24.

“However, 10 U.S.C. § 7274 requires that the Medal of Honor be awarded ‘within five years after the date of the act justifying the award.’ Before we can take further action with this nomination, Congress must waive this time limit. Once legislation is enacted authorizing the President of the United States to award, if he so chooses, the Medal of Honor to SFC Cashe, I will provide my endorsement to the President.”

After skepticism born of a decade and a half of trying, White said she is elated at the news.

“My heart is overjoyed. We now have passed the Senate, which means we have full support,” she said. “This means more than you’ll ever know because now all we need is for the president to sign off on the endorsement, and my brother, Sgt. First Class Alwyn C. Cashe, will finally get the medal he deserves, our nation’s highest honor.”