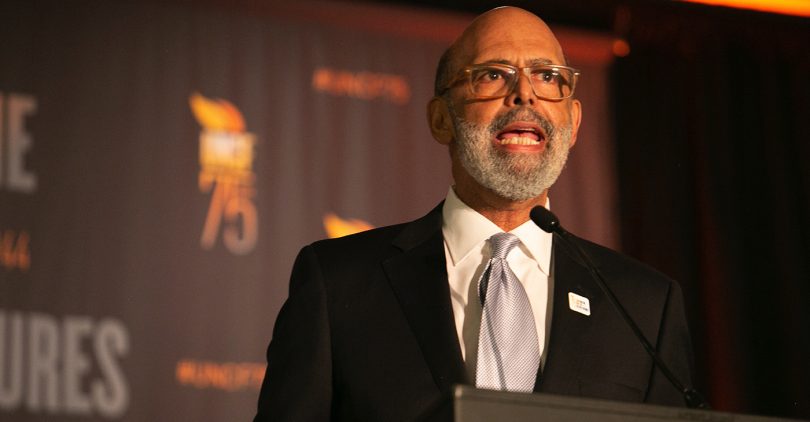 For 75 years, the United Negro College Fund has been lighting the way to better futures for young people and leaving little doubt to the importance of its catchy but all-too serious slogan: “A mind is a terrible thing to waste.”

And, for more than 14 years, no one has championed the cause of a good education for African Americans and other underserved students better than Dr. Michael Lomax, the president and CEO of UNCF, which counts as the country’s largest provider of scholarships and other educational support for students of African descent.

“Many [African American students] are choosing historically Black colleges and universities (HBCUs),” Lomax said this week after hosting a luncheon where he helped to deliver a State of HBCUs address.

“HBCUs have more enrollment today than in the era of segregation. We had a decline in enrollment of about 10 percent because of the Parents Plus loan fiasco in 2012, but enrollments are growing,” Lomax said.

A large number of African American millennials are applying to HBCUs but many are finding that they can’t afford to attend without the benefit of more scholarships and grants, he said.

“That’s why we’ve called on Congress to double the Pell Grant, not just for HBCUs, but for all private institutions which are endangered species in this country,” Lomax said.

Since its founding, UNCF has raised more than $4.8 billion and has helped at least 450,000 students earn degrees at UNCF-member HBCUs.

With 37 member colleges and universities, the UNCF also advocates for the importance of minority education and college readiness.

Currently, UNCF supports more than 60,000 students at more than 1,100 colleges and universities across the country.

“There are more small white colleges that are being threatened with closure and shutting down and a member at Harvard University has predicted that half of all private colleges will be closed over the next decade,” Lomax said.

It’s that same spirit that led UNCF and many others to respond when the historically black and all-girls Bennett College was given just 60 days to raise $5 million in an attempt to keep its accreditation.

“There are 95 standards [the Southern Association of Colleges and Schools) hold its institutions to and they include education programs and faculty requirements. Bennet had 94,” Lomax said.

“They missed one and the one they missed was the standard on finances and even when they did what they were directed to and out-did it, [the association] still withdrew accreditation,” he said.
Lomax continued:

“I consider that to be biased and inequitable and I’ve called on Congress to intervene. We’re in court. We’re not going to allow Bennett to be destroyed because the actions taken are actions to destroy Bennett and it’s inappropriate, biased and unfair and we will fight it and we stand with Bennett.”

Fighting for Bennett is of little surprise as UNCF continues to press its vision of a nation where all have equal access to a college education that prepares them for rich intelligent lives, competitive and fulfilling careers, engaged citizenship and service to the nation.

One of UNCF’s primary objectives is to increase the total number of African American college graduates by focusing on activities that ensure more students are college-ready, enroll in college and persist to graduation.
That mission includes helping to eradicate much of – if not all – student debt.

“Student loan debt is an enormous financial and psychological toll on students. We must invest in students and keep them from being in the red,” Lomax said.

An alumnus of an HBCU (Morehouse College graduate), Lomax formerly served as president of Dillard University in New Orleans and he worked as a literature professor at UNCF-member institutions Morehouse and Spelman colleges.

The founder of the National Black Arts Festival, Lomax also served as chairman of the Fulton County Commission in Atlanta, the first African American elected to that post.

“I have seen first-hand that HBCUs produce outsized results for first-generation, low-income students of color, and do so with no-frills budgets,” Lomax said.

And, when he hears from critics that HBCUs are no longer relevant, Lomax provides the perfect response.
“Virtually no researchers have sought to comprehensively assess the modern-day economic impact of HBCUs,” he said.

Under Lomax, the UNCF has done exactly that.

The latest researched revealed the total economic impact of HBCU spending stands at $14.8 billion annually while those institutions generate 134,090 jobs for their local and regional economies.
Further, the total lifetime earnings for graduates exceeds $130 billion.

The positive economic impact of HBCUs demonstrates that those institutions are economic engines in their communities, generating substantial financial returns year after year,” Lomax said.

It’s also why he’s called on Congress for the following:
Increase Title III Part B funding in the amount of $100 million to enable HBCUs to use funding to meet the needs of their institutions:

Extend annual mandatory funding of $85 million for a decade for the Strengthening HBCUs Program, an initiative to increase the number of minorities in science, technology, engineering and mathematics (STEM);
Appropriate $1 billion for HBCU’s infrastructure to preserve and upgrade the historic institutions, improve technology and expand capacity;

Double the Pell Grant award for students to pursue their degrees without burdensome or crippling student loan debt;
Review the procedures and decisions of higher education regional accreditors to offset the “harsh, seemingly disparate [and] too often existential punishing sanctions handed out to historically Black colleges and universities,” Lomax said.

“Among the many contributions that HBCUs have made to this country, HBCUs are the engines that help power and deliver much-needed economic and workforce diversity,” he said.

“By that standard alone, our institutions are worth the federal investment we are asking for.”