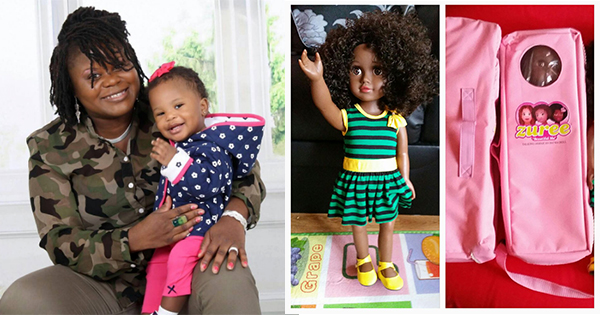 Saffron Jackson, a 38-year old Jamaican entrepreneur, is making headlines for creating Zuree Dolls – unique baby dolls that look Jamaican and speak the language of Jamaican Patois. She says she wanted her daughter to have a doll that looked like her, spoke like her, and connected her to her own culture and heritage.

Although she is a Jamaican native, Jackson actually who lives in England, and first presented her dolls to the Jamaican High Commission in London. One week later, they were available online for the public to purchase… and they instantly sold out!

She was taken back by the huge demand for Patois-speaking dolls. She far exceeded her initial goal to sell 400 dolls, and even started to received orders from the U.S. – her first being an order from Miami, Florida for 50 dolls.

Jamaican culture is in demand

Hundreds of thousands of Jamaicans live all over the world, so Jackson wants to get her Zuree Dolls into all major stores that sell dolls. She is also working on a Zuree Girls book series; the first book has already been published. In March, she will also introduce her new Rasta-talking bear.

Jackson says she is already getting sales from countries like Australia, Estonia, Amsterdam, and Germany. She says that this show that “there is a massive demand for our culture.”

To learn more about her and/or Zuree Dolls, visit www.zuree.co.uk