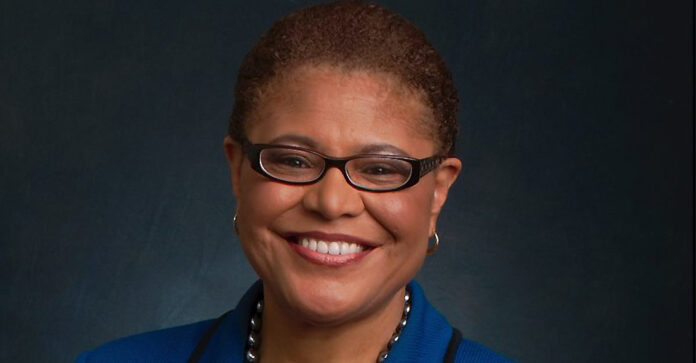 WASHINGTON — October 31, 2019 — Today, by a party line vote of 232-to-196, the Democrat-controlled House of Representatives took the historic step of passing a resolution formalizing the parameters of the next phase of the impeachment inquiry. An important move in a process that could eventually lead to the impeachment of President Trump.

Shortly after the resolution was passed, Congresswoman Karen Bass (D-CA), the Chair of the Congressional Black Caucus, briefed publishers and editors from the Black Press of America during an exclusive conference call with members of the National Newspaper Publishers Association (NNPA).

The congresswoman explained to Black Press publishers what has transpired and what to expect going forward.

“I wanted you to know, first and foremost, that we did not vote to impeach the president. We passed a resolution that had five major points,” Bass stated.

“Over the last few months, we have been involved in an impeachment inquiry, and our Republican colleagues had wanted us to vote on an inquiry,” she said.

“What we did today was a vote on an impeachment inquiry, and we voted to continue the depositions and hearings and investigations that have been ongoing.”

Today’s action in the House opens the door for all Americans to hear and see the public presentation of the testimony and evidence against the president.

The vote also provides the president and his legal team the opportunity to present evidence, witnesses and testimony in the president’s favor and to cross-examine anyone who testifies against Trump.

The House Intelligence Committee will continue to hold private meetings on impeachment, but will soon hold public hearings, Bass stated.

“If we take Articles of Impeachment on the floor and vote them off the floor, that will be the beginning of the impeachment process,” Bass continued. “It’s a two-step process, that you can view from an indictment, which is what an impeachment is, and then a trial will take place in the Senate.

“The first two years of his presidency, when Republicans were in charge, they refused to provide any oversight whatsoever. And so, the investigation that took place before that was done by [Special Counsel Robert] Mueller was not a part of a congressional process.

“Now, after the Mueller Report came out in the Judiciary Committee, we spent time looking at the ten examples of obstruction of justice, where we believe that the president violated the law.

“But one of the frustrations of the Mueller process was that he refused to make a definitive statement because he said he couldn’t since the president is not subject to an indictment.

“So, what I think happened was a dramatic change in the situation. We were looking at the president before – what happened in the past.

“When the whistleblower came forward, well, that’s happening right now. Many of us believe this was his attempt actually to be involved in the election next year.

“So, it’s one thing to talk about his past, but it’s a whole other situation to speak about him violating the law presently on an ongoing basis.

“And, if you listen to his public statements, he’s been pretty bold about saying, Yes, he thinks that China should provide dirt on opponents.

“And so truthfully, up until the time of the whistleblower, I was of the mind that if we impeach him, there would be no way he’d be tried and convicted in the Senate.

“At this point, I feel like several people around him, especially from the State Department in the Intelligence Community, have had enough and they’re spilling the goods.

“And this is a qualitatively different situation than existed a month ago.

“With his illegal behavior, the president is really providing all of the information we need.

“He goes out in public and says that, you know, he invites the Chinese to investigate his opponents. You know, you’re watching him on live TV say things that one could argue are illegal.

“He is holding back hundreds of millions of dollars in foreign assistance, military assistance to one of our allies who are in the middle of a war. Now you refuse to assist them until they publicly say that they are going to investigate your opponent.

“Then you have him panic and decide that he is going to pull troops away from an ally, another ally, and essentially a slaughter occurred. Those two things together are dramatically different than anything that’s happened before.”