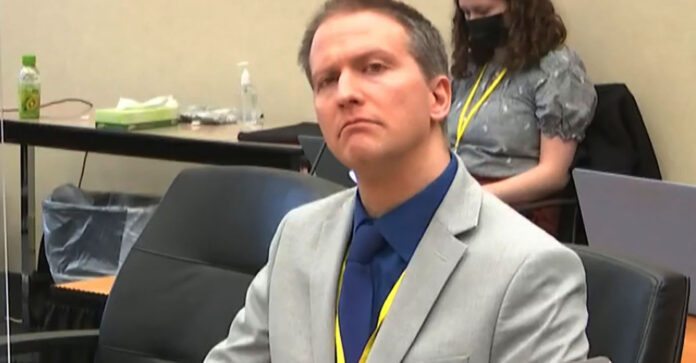 As Derek Chauvin listened to formerly fellow officers, EMT workers, and civilian witnesses repeatedly issue damaging testimony, the former Minneapolis cop knew he still had more than a fighting chance at an acquittal in the death of George Floyd.

He has American history and a wealth of statistics that suggest a favorable outcome in spite of what some witnesses have testified — and the irrefutable video evidence that shows he alone caused Floyd’s death.

Recent data made public by a Bowling Green State University criminologist revealed that police officers who are charged with committing murder or manslaughter are more likely to win an acquittal – if they are prosecuted at all.

According to statistics provided to the Washington Post this month by Philip M. Stinson at Bowling Green, between 2005 and 2015, more than 1,400 officers were arrested for a violence-related crime committed on duty.

“In 187 of those cases, victims were fatally injured in shootings or from other causes. The officers charged represent a fraction of the hundreds of thousands of police officers working for about 18,000 departments nationwide,” Stinson reported.

“Police charged with committing violent crimes while on duty were convicted more than half the time during that period. In the most serious cases — those involving murder or manslaughter — the conviction rate was lower, hovering around 50 percent,” the report continued.

What’s more, although half of the people shot and killed by police are White, African Americans are shot at a disproportionate rate – accounting for less than 13 percent of the population, police kill Black people at more than twice the rate of White Americans.

“The public has witnessed case after case where an officer is recorded brazenly shooting and killing an unarmed Black person and is not arrested or charged for these crimes,” Johnathan Spencer Perkins, a public academic, higher education attorney, lecturer, and podcast host, told NNPA Newswire.

“In most states, police are immune from financial liability. This means they can behave however they’d like, without fear of an outside lawsuit,” Perkins remarked, noting that “study after respected study has found that Black people are 3-to-5 times more likely to be stopped, arrested, hurt, and killed by police.”

Chauvin did not shoot Floyd, but his actions were consistent with those of other officers whose behaviors led to physical confrontations between African Americans and law enforcement. An unfortunate reality in this scenario is that police work closely with prosecutors thta are reluctant to upset the relationship by prosecuting officers, some experts said.

“On a daily basis, police officers are prosecution witnesses in nearly every criminal case. Prosecutors and police rely upon and collaborate,” April Preyar, a criminal defense and civil rights attorney in Chicago, told NNPA Newswire.

“Prosecutors are reluctant to try to secure a conviction against someone who has essentially been their partner in the criminal courts. Further, prosecutors know what judges and jurors alike favor cops,” Preyar observed.

“Potential jurors often admit during voir dire that they will believe an officer who they have never met before over any civilian witness who may hit the stand. Further, the Fraternal Order of Police carries a great deal of clout in the political process.

“Judges often don’t want to get bad press from the FOP by convicting one of its own. Lastly, prosecutors often have difficulty finding an appropriate statute to charge an officer who committed a crime while on duty. The laws are written with civilians in mind. Often this gives dirty cops a loophole which they can avoid prosecution and subsequent conviction, regardless of how egregious their actions were.”

“Law enforcement officers and prosecutors have working and personal relationships that require trust. When a District or State Attorney prosecutes a police officer, one has to wonder if the prosecutor is doing so with the same zeal that they would any other defendant,” Parker weighed.

“Are they showing the same passion in making their argument to a grand jury? Are they prosecuting tenaciously or merely going through the motions, granting their co-workers the benefit of the doubt?

“In theory, a prosecutor seeks justice on behalf of the people whom they represent, regardless of the identity of the defendant. In reality, prosecutors are humans who possess emotion and possess established loyalties.

“And these human characteristics can make a prosecutor feel compassion for someone he or she shares a common bond. This compassion can lead to a weaker level of prosecution that another defendant might experience when facing criminal charges.”