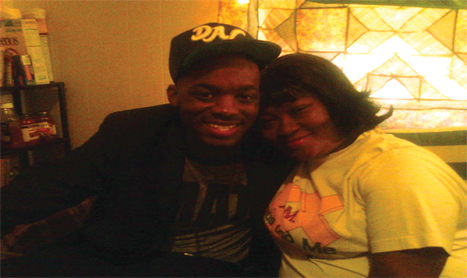 Kelly Lott, a Denton native and resident, spent her entire life overcoming drug abuse and homelessness. Within five years she lost her parents to cancer, her brother in a car accident, and three boys to Child Protective Services. Decades have passed, but Kelly has still managed to maintain peace of mind and life.

Born as a crack baby with several health problems and taken at birth, Milton Lee Hood was officially adopted by the Bradford family at the age of six years old and renamed J.R. Bradford. The young boy thrived in the environment created by his adopted parents. The family adopted five children with J.R. being the oldest and the only they’d adopted from two weeks old. Raised in Ft. Worth, J.R. spent his adolescent years searching for his true identity and family. A few years ago he found his passion and talent in acting and stage plays where he has been very successful.

For the past five years every Christmas, J.R. has searched for his biological mother. While his adopted parents had passed away over the last few years. Time and time again, his research only unearthed bits and pieces of information but now had led him in the right direction. On Thursday, December 24th, he decided to search for “Lott” on Facebook and added published author and entrepreneur Crystal Victoria as a friend. He quickly sent a short message to ask if she knew of a Kelly Lott. J.R. had finally met one of the only living relatives of Kelly Lott, her niece Crystal Victoria.

Crystal Victoria is the founder of Target Evolution Inc, a 501c3 nonprofit organization teaching entrepreneurship to at-risk youth and low income families located in Dallas, Texas. After reading J.R.’s message, Crystal called the contact number to arrange to meet J.R. in person. She drove across Dallas to pick him up and after one look decided they should go find Kelly together immediately. Crystal was unsure of where Kelly was located but knew her aunt wanted to find her children. Over the past few years, Crystal and Kelly searched online to locate her sons, however to no avail due to name changes. CPS and the adoption agencies had sealed the records making it impossible to locate the boys by their birth name.

Crystal had a hunch of where Kelly was living in Denton, and took J.R. to see if they could locate his long lost mother. On the way to Denton, Crystal and J.R. had a great conversation and became good friends immediately. Out of all the places Crystal wanted to check to find Kelly, they found her at the very first stop. J.R. watched as Kelly ran out of the house to embrace Crystal for the first time ever. Taking in every moment of time observing his mother, he anticipated the moment they’d meet for the first time.

Finally, Crystal introduced Kelly to J.R. and asked her if she saw a resemblance. Kelly looked baffled, but introduced herself as “Aunt Kelly”. Crystal intervened and said, “I’m not sure you’re Aunt Kelly in this case. In fact, I think y’all look a lot like mother and son.” Kelly’s eyes instantly watered as she asked Crystal if J.R. was her son. Crystal’s smile gave away the answer, and Kelly clinched her heart as tears of joy fell from her eyes. She turned to J.R. and embraced her son for the first time ever on Christmas Eve.

The three bonded for the next few hours and Crystal took J.R. back to Denton to spend Christmas Day with his mother. For the first time in 28 years, Kelly and her son were reunited for the holidays. Next, for Aunt Kelly, Crystal Victoria and J. R. Bradford is to find the other two siblings, Christopher Milton and Brett Boyeau.

If you or anyone you know, can assist them in their efforts to reunite their family please contact Crystal Victoria via email at CrystalV@eemceducation.com.