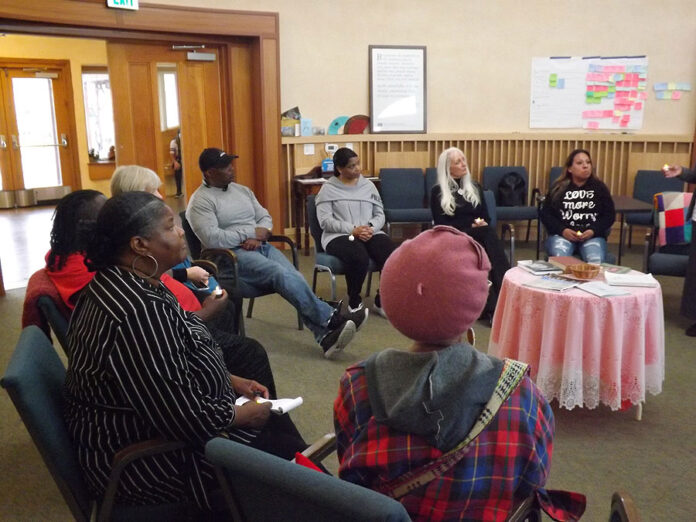 The Peace Resource Center located at 3850 Westgate Pl in the neighborhood of City Heights was where a small group of people came together for a huge discussion on “Treatment vs. Prison: Individual And Community Impact.” The discussion happens each third Saturday of the month in the comfortable confines of a room attended by family members of individuals in need of mental health care, but who were, instead, sentenced to prison.

The discussion was facilitated by Cheryl Canson who has placed a rather poignant title on these talks: “Treat M.I. Don’t Mistreat M.I.(Mental Illness),” which the latter seems to be the case more than not. However, if we as a community and society at large are to address this issue we have found a resourceful pool of experience to pull from. Ms. Canson, a fair skinned African-American woman with rich and healthy flowing dreadlocked hair, wears a face and attitude of sincere concern while speaking and listening to others in a room motivated with people power. Her experience is personal as she herself has, not one, but two sons diagnosed with mental illness spending up to eleven years in a prison system that has not shown much compassion for the mentally ill, and especially not those of color. The attendance at the meeting reflected that fact.

Canson noted, “As mentioned earlier, the power of the people is in effect with regard to Assembly Bill 1810, approved in June to create opportunities for mentally ill defendants to get the help they need. We all know the wheels of justice turn very slow. However, there has been $100 million dollars allocated to funnel down through specialized courts across California. Four hundred of them, in fact, along with programs that divert defendants from jails into treatment, according to the state judicial branch’s website.”

According to the state website, AB 1810 gives resources for those suffering from some diseases, but not others. Mental disorders such as bipolar disorder, schizophrenia, and post-traumatic stress disorder are covered. Personality disorders like antisocial or borderline personality disorders are not . No defendant who has committed a violent crime, such as murder or voluntary manslaughter, rape or lewd or lascivious acts on a child, is eligible.

One of the major focal points in the conversation at the Peace Resource Center was that of the (PERT) Psychiatric Emergency Response Team. PERT provides emergency assessments to those in need of mental health care. Law enforcement is paired with licensed mental health clinicians to provide proactive preventive solutions as needed. The group all agreed more resources are needed in this area. There is so much more to be discussed and done concerning these issues. It can’t be done without the power of people. To get involved with Cheryl Canson you can catch up with her on Facebook.