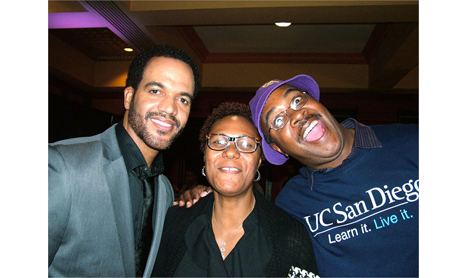 Ten years ago digital marketing was a new and untested catchphrase. Today, as many artists and producers have discovered, it has become an integral part of promoting and distributing their work. Digital Marketing was among several workshops offered to aspiring filmmakers at this year’s San Diego Black Film Festival, held last weekend at the Gaslamp’s Reading Cinema. “Build and maintain your website, create engaging content, always monitor your brand, tweet and re-tweet” to promote your product were some of the tried-and-true tips offered by panelist Steven Jones, whose VGS&L Entertainment management firm has counted among its clients Sony, Beyonce and VH1.

Saadiqa Muhammad and Christina DeLeon are two of the participants at this year’s festival who have followed the digital marketing trend with great success. Their new reality web series “Moms,” featured at this year’s fest, offers a refreshing take on motherhood. “It’s a kind of ‘Sex in the City’ meets ‘Modern Family’—four women trying to juggle the responsibilities of motherhood and life,” says Mohammad, who is writer and executive producer of the popular series.

With web series becoming an emerging force in entertainment, Muhammad and DeLeon launched their project last year on Mother’s Day. “Our marketing strategy is to build a platform using social media,” which they hope will lead to a television series, says DeLeon, actress and executive producer. YouTube, Facebook and Twitter have served as excellent tools to build an audience base. “The web gives artists opportunities to be inventive, to not have to sit around and wait for someone to initialize or take on your project. You can do it on your own,” adds Muhammad. “That is very freeing.”

“When I see an opportunity, I say ‘Let me in,’” says Muhammad. The online model is a platform, which helps them to “build a buzz.” They’ve been fortunate so far, using bartering and other tools on social media for advertising and bringing in donations.” Adds DeLeon, “For every eleven no’s, there comes a yes.”

Among the luminaries who graced year’s festival was recording artist Bill Withers. The personable singer/songwriter spoke with and posed for selfies with admiring fans on Saturday morning before the screening of his 2008 documentary “Still Bill.” What comes through in this beautifully constructed, intimate 90-minute bio-pic is that, with its concert footage, journeys to his birthplace, interviews with music and sports legends, his family and closest friends, the Slab Fork, West Virginia native is still a country boy at heart. With all the fanfare and adulation he experienced during the 70’s and 80’s, when he penned and recorded such classics as “Just the Two of Us,” “Use Me,” “Ain’t No Sunshine,” and his own personal favorite “Grandma’s Hands,” he still has remained true to his roots, following his heart and not the advice of the so-called “blaxperts,” who tried to tell him what to do. The film is filled with humor and country wisdom, gleaned from his grandmother and other elders who were part of his lean years growing up in the South. He remembers how his grandmother used to sit on the front porch in Slab Fork and clap her hands and sing spirituals; and how in church, the best hymns sung were those that rang the rafters when someone stood spontaneously and offered praise. Once labeled “handicapped,” by a teacher because he was a stutterer, to this day Withers remains an ardent supporter of groups that help people with the same condition. A most memorable moment in the film occurs at a reception in his honor from Our Time, a charitable organization that works with young people with speech impediments. After the children perform a song for him, Withers wipes away tears and offers how he coped with people laughing at him when he began stuttering. “Approach people with a prepared forgiveness. We have to be more civil than most people that we will encounter. Having had people not understand me made me wait a little bit to where I can extend something that hasn’t been given to me. And I think that makes you a much bigger person.”

With some 100 screenings offered, choices are difficult, but worthy of mention are “Tula the Revolt,” a historical drama about the slave revolt of 1795 in the Dutch colony of Curacao, starring Obi Abili and Danny Glover; “One on One,” directed by Xavier Neal, a short about a dilemma faced by a young sought-after basketball star; “The Jitterbugs,” directed by Haleem Ar-Rasheed, a look at the founders of Detroit’s leading dance legacy, the Jit; and “Still Jammin,’” Stinson McClendon’s documentary on the historic Local 627 in Kansas City, one of a handful of Black unions across the nation that facilitated the growth of jazz, fueling legends in American Jazz history including Count Basie and Charlie “Yard Bird” Parker.

Other luminaries who were part of the festival include actress Robin Givens, American idol recording artist Ruben Studdard, and “The Young and the Restless” star Kristoff St. John, who premiered his documentary “A Man Called God.”

For San Diego resident Barbara Davis, the festival highlight was seeing “Still Bill,” whose comments about his grandmother especially resonated with her as she remembered the impact her mother had on her. “He charted his own course. He’s the real deal,” she said.

Said Karen Willis, festival director, “We are so pleased to once again host the San Diego Black Film Festival, which is one of the largest in the country, and welcome filmmakers from all over the country and the world, to offer opportunities for networking and to showcase their work.”