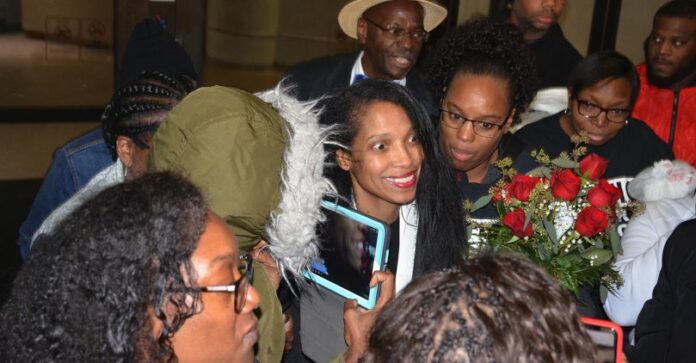 Tracie Hunter, the first African American juvenile court judge in Hamilton County history, is free again after serving nearly three months of a six-month jail sentence following her conviction on charges of unlawful interest in a public contract. She was found guilty of helping her brother keep his county job by mishandling a confidential document.

In July, Hunter was dragged off to prison after going limp in the courtroom while demonstrators protested her incarceration.

As news broadcasts showed a sheriff’s deputy dragging the former judge away, Hunter told NNPA Newswire that she mostly blacked out.

“As I previously shared with [The Black Press], I had very extensive injuries from an accident. I had a metal rod in my back, and it limits my mobility,” Hunter explained.

“Then, after the judge imposed the sentence, there was so much commotion, and I and my attorney both were hit in the back of our heads. At that point, everything became a blur. The next thing I knew, I was being dragged across the courtroom floor,” Hunter stated.

Once behind bars, things only got worse.

Hunter said her health began to decline, guards mistreated her regularly, and regular showers were denied.

Guards also searched her small cell often, and without cause, Hunter stated.

“I was treated horribly by the guards. They talked to me in cruel and disrespectful ways,” she noted. “They searched my cell all of the time, and often I’d be the only person they’d search. On one occasion, they went to the room next to me and told the people there to pretend they were searching that room, but they were searching my room.”

During one of the searches, Hunter alleges that prison guards entered her cell and “absolutely tore it apart.”

“One time, they said they were searching for drugs, and what’s odd is that they know I have never done drugs, and I don’t drink. But there were others in there because of drugs, and they didn’t search them for drugs,” Hunter stated.

The only thing guards ever confiscated from Hunter were writing pens, which she believed was within her rights to possess.

Worse, Hunter stated that she would routinely be on lockdown, once for as long as 25 consecutive hours. Rarely did she eat because she feared guards might have poisoned her food.

“They’d bring me my food, but I wasn’t going to eat it because they had treated me so viciously. They were handling my food, so I thought it might have been poisoned,” Hunter stated.

Jail nurses would provide Hunter apples and Gatorade to help keep her from starvation and dehydration, she said.

“Mistreatment was going on daily. Most of the time, I was freezing cold, and I wore like five shirts every day, around the clock,” Hunter noted.

Hunter, who earned her undergraduate degree from Miami University in 1988 and her Juris Doctorate from the University of Cincinnati College of Law in 1992, won the election in 2010.

Williams and the GOP contested Hunter’s victory, and a heated court battle ensued.

After numerous appeals by the Hamilton County Board of Elections, officials refused to count more than 800 votes from majority Democrat and Black precincts.

Hunter then filed a federal lawsuit to have those votes counted.

While the court finally ordered the count, election officials still certified Williams as the victor.

Eventually, the election was overturned in Hunter’s favor.

The 18-month period proved pivotal because of then-Gov. John Kasich appointment of Williams to the bench.

As the senior judge and the only one elected, Hunter would have received the position of the administrative judge.

Still, Hunter worked behind the bench to protect the rights of children, including refusing to allow their names and faces to appear in news coverage.

Among other things, she instilled a system that focused on rehabilitation instead of incarceration.

She forced the juvenile court to change its entire reporting system and outlawed the routine shackling of juveniles in her courtroom.

Hunter also received credit for exposing juvenile case statistics, which were being inaccurately reported and falsified to the Ohio Supreme Court.

She hired African Americans in key positions, reduced default judgments, and spearheaded the change of state election laws, which paved the way for ex-felons to vote.

However, the Cincinnati Enquirer and WCPO Television joined Republican county officials in the prosecutors’ and commissioners’ offices in lawsuits challenging Hunter.

“They filed 30 lawsuits in less than nine months that I was on the bench,” Hunter said.

After serving just 18 months, her enemies found a way to silence her and end her career.

Prosecutors alleged that Hunter used her judicial credit card to appeal the lawsuits filed against her by Deters, the prosecutor.

She was sentenced in July and began serving six months. The court reduced the sentence after she agreed to minister to inmates in the jail.

Hunter walked out of jail on Saturday, Oct. 5 but her legal and personal battles are far from over. “I’m continuing to fight this wrongful conviction until it’s overturned,” Hunter stated.

“The first African American to serve on the juvenile court of Hamilton County, and you become a political prisoner who was treated horribly. Our community in Cincinnati has always been divided by race, politics, religion, and social economics. I will never apologize for something I did not do. They want me to apologize for dividing a community that was already divided. And, I’m certainly not going to apologize to a sheriff’s deputy who dragged me on the floor like a piece of trash for the entire world to see. That was demoralizing, dehumanizing, and degrading. And, on top of that, it was an African American woman whom they put up to doing that.”