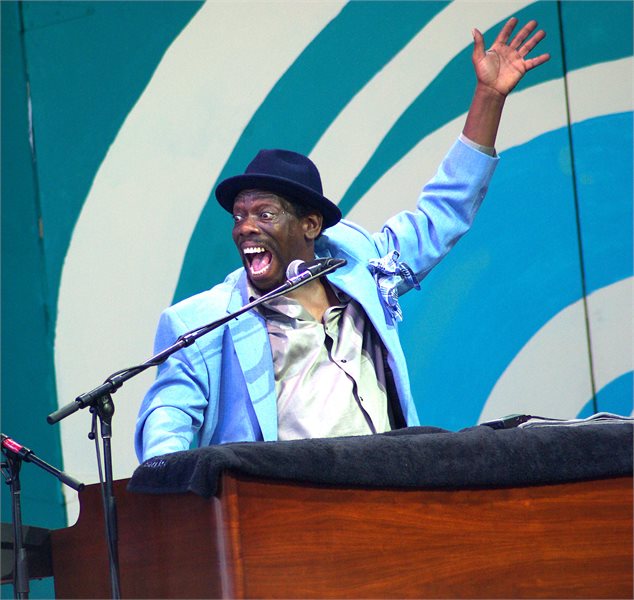 The Friday night opening performance showcased an homage to the 60th anniversary of piano icon Errol Garner’s 1955 album “Concert by the Sea,” recorded in Carmel, and still one of the best-selling albums in jazz history. Led by multifaceted piano genius Geri Allen and featuring Jason Moran and an extraordinary Christian Sands, also on piano, with Russell Malone on guitar, Darek Oles on bass and Victor Lewis on drums, this set created magic, like moonlight on water, from the first note to last.

Chick Corea’s Trio (Corea is MJF’s 2015 Showcase Artist) with Christian McBride and Brian Blade followed, and the evening concluded with a spectacular history-making performance,  celebrating the music of bassist Jaco Pastorius, hailed by Grammy-winning composer/arranger Vince Mendoza as one of the most eclectic and adventurous composers/musicians in contemporary music and jazz. An acclaimed bassist (by his own tongue-in-cheek admission, “the world’s greatest”) Pastorius rose to fame in 1976 with ‘70’s and ‘80’s jazz fusion band Weather Report, later collaborating with such diverse artists as Joni Mitchell and Pat Metheny. The set, led by arranger Mendoza and showcasing an all-star ensemble including former Weather Report bandmates Peter Erskine on drums and percussionists Alex Acuna and Manolo Badrena,  lit up the stage with the tenacity and passion that marked Pastorius’ all-too-short trajectory as a master innovator (he died tragically at age 35 with complications caused by drug use and bipolar disorder).  Bass giant Christian McBride and Jaco’s son Felix, also an accomplished bassist, jammed on Mendoza’s mighty arrangement of “Slang/Punk/Jazz.” Vocalists Tierney Sutton, with flowing blond hair and gorgeous jazz riffs on “The Dry Cleaner from Des Moines” from Joni Mitchell’s album “Mingus,” and Sonny Knight in glowing pink suit and a gritty taste of blues on “Fannie Mae,” gave texture and dimension to tribute that will no doubt go down in Monterey Jazz Festival annals as one of its finest.

Oh, the agony—and the ecstasy—of deciding which performance to attend. Playing opposite the outstanding Chick Corea’s Trio Friday night performance in the Jimmy Lyon’s Arena, was Terence Blanchard headlining in Dizzy’s Den. The Grammy-winning trumpeter/composer, enormously respected in jazz today, is always breaking new ground, and the lure of his new quintet the E-Collective proved to be irresistible. Playing several songs from his new Blue Note album “Breathless,” the New Orleans-bred Blanchard, with band members Charles Altura on guitar, Fabian Almazan on piano, Donald Ramsey on bass and Oscar Seaton on drums explored exciting new territory that artfully and playfully fused jazz with blues, funk and R & B.

Saturday afternoon in Monterey teems with the blues, and true to form, the Garden Stage and the Arena did some heavy rocking. Nikki Hill, a young belter with an old soul took charge on the Arena stage with a non-stop gospel and honky-tonk infused heaping helping of the blues. With the crowd already heated up (not just from the in-the-90’s weather dial) veteran bluesman Lucky Peterson staked his claim first on organ, then guitar, working the crowd, who began first toe tapping, then hand clapping, then out and out shouting out their appreciation of the master showman. “Don’t Try to Explain,” his gut-wrenching tale of love gone wrong, was a show-stopper. The afternoon’s big finish came in the form of Trombone Shorty, who came out guns blazing, galvanizing the stage with his Orleans Avenue septet. A huge stage presence, there seems to be no end to this Crescent City-born genre-bending artist’s talent, electrifying with vocals, trombone, trumpet, drums, piano and probably a heap of other instruments, serving out what he aptly calls, “a big old pot of gumbo.”

Ambrose Akinmusire, trumpeter extraordinaire and this year’s Festival Commissioned Artist, premiered his work “The Forgotten Places,” a mesmerizing composition that was inspired by a weeklong retreat at the Glen Deven Ranch on the California coastline. Described as “as suite evoking interior emotional spaces as well as locales neglected and left behind,” the opus was masterfully woven together by his Quartet +5, a diverse and exquisitely textured collaboration.

The Monty Alexander Trio’s sterling performance in the Coffee House Gallery brought to the stage a wonderful mix of swing, bebop and some blues-imbued melodies. A consummate pianist, Alexander has formed a legendary trio with John Clayton on bass and Jeff Hamilton on drums. The Jamaican native laced his set with funny stories like when he played at Jilly’s in New York for Frank Sinatra and his buddies, who told him,” ‘Keep playin’, kid.’ I kept puttin’ down songs,” he laughs, “and they kept puttin’ down Jack Daniels.”  Duke Ellington’s “Love You Madly,” and his own self-penned “Eleuthra,” both gorgeously arranged chestnuts, were highlights.

Yes, MJF has it all—great music, great people, great vibe. Each year the circle of jazz lovers grows ever larger, with new aficionados gathered into its embrace. Former San Diegan Bill Shack has been coming to the Festival for over ten years and, with wife Jin Jin, was soaking in the ambiance and the sounds. Now an entertainment executive in Las Vegas, Shack served as president of the Black Ford Lincoln Mercury Dealers Association and owned a Miramar area dealership. “I come for the music and for the camaraderie,” he says, offering that a favorite memory was seeing Oscar Peterson in 2006. “He was a monumental talent. This Festival is a way to enjoy the music in a laid back atmosphere and at the same time connect with new folks and re-connect with old friends.”

The Passing of Dr. Robert Matthews