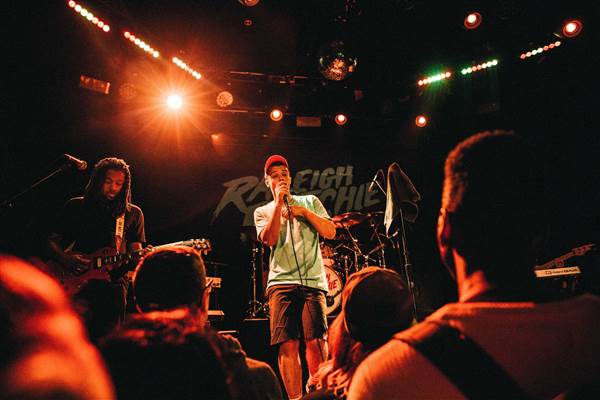 “Game of Thrones” fans found a moment of satisfaction earlier this season when Grey Worm’s respectful friendship with Missandei finally crescendoed into a steamy scene that sent fans into a frenzy.

Now as devotees wait patiently — and painfully — for the next season to reveal where this relationship may go, it may be worth staking out Grey Worm off screen, on stage.

Jacob Anderson, who plays the commander of the Unsullied, may go down in history as one of the most beloved, silent characters of the series. But away from the big screen, indie music fans know the actor as a pop artist who effortlessly blends pop, hip-hop and R&B.

Earlier this year Anderson transformed from a fierce warrior to a multifaceted singer who goes by the moniker, Raleigh Ritchie. He completed his North American tour for his debut album, ‘You’re a Man Now, Boy,’ this spring, performing for the first time in New York City at the Bowery Ballroom to a sold out audience.

“I wanted to come here since the beginning of my career but it’s hard because I have to bring my band over,” he told NBC News after his NYC tour stop. “It was a timing thing. Post the album coming out last year I was very busy. I was shooting ‘Game of Thrones’ and a lot of other things were happening, so this is the first time that I had the time to come here.”

Hailing from Bristol, England, Ritchie left his hometown at the age of 17 to pursue music. Although nervous, the entertainer’s parents were supportive of his decision to leave home and follow his dreams.

“My mom and my step mom were pretty anxious about me moving away on my own. I think they were quite nervous about me being alone. But as a kid I’ve always wanted to work. I wasn’t interested in being a kid, which I kind of regret now and I’m kind of making up for it now,” said Anderson.

The actor’s decision to explore a career in the arts at a young age is revealed in his music. “You’re a Man Now, Boy,” focuses heavily on love, confidence and the concept of growing and aging.