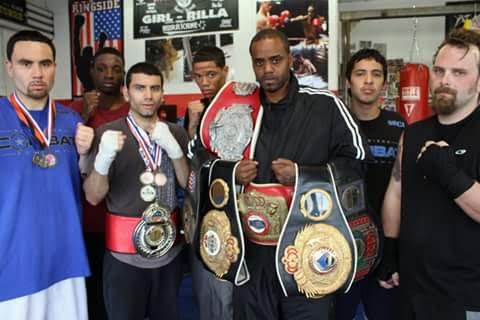 San Diego is a city that is rich in boxing history. It’s the adopted home of all-time great Archie Moore, and other great boxers such as Quentin Breese and Lee Ramage just to name a few. San Diego was also the site of the first fight between Muhammad Ali and Ken Norton. Tiger Smalls is now doing his part to keep this rich tradition going while continuing to build on his legendary resume.

Tiger Smalls began his love for boxing at the age of three in New York. By the time he was eight, boxing became more than just a hobby.

“When I was a little kid I use to stand in front of the TV and mimic what I saw the boxers doing. My dad noticed my passion and that I was serious so he decided to take me to the gym and that’s where it all started.”

As a teenager Smalls became a world class prospect in the Amateurs. He eventually decided to join the U.S. Navy and that’s what brought him to San Diego. While in the Navy Smalls would go on to win the All Armed Forces Bantamweight title, amongst other military titles. After completing four years of service, Smalls decided to chase his dream of becoming a professional fighter.

Smalls went pro in 1993 and went on to win 21 fights over the course of his career including numerous world titles. Smalls also had a few bumps in the road during his career however, most notably the “Golden Palace” issue with ESPN.

“Golden Palace was an online casino that paid fighters extra money if we wore temporary tattoos on our back with their logo for advertising. I had a fight on ESPN and I decided to wear the tattoo for extra cash, ESPN went irate and tried to hold my money for the fight. We went to court and I eventually won what they owed me.”

He retired in 2011, and in 2013 he was inducted into the California Sports Hall of Fame.

“I’ll be honest, even though I was inducted into the hall of fame, I still didn’t live up to the expectations for myself. The reason I say that is because having the amateur background that I had, which was highly touted, I was always expected to do more. I’m very grateful though.”

After retiring, Smalls began training fighters at various gyms throughout San Diego. He now has his own company called Tiger Smalls Boxing with 2 locations already open in San Diego.

“I currently have 4 undefeated fighters including my son Prince Tiger Smalls who is currently 12-0. I love what I do, and I just want to continue to train these young fighters and help them achieve their goals of one day becoming world champions.”